With much of the supply/demand background fairly stable, weak natural gas cash pricing drove a deep dive lower for forward markets during the June 11-17 period, NGI’s Forward Look data show. Double-digit decreases extended across North America through the rest of summer, though smaller losses were seen further out the curve. 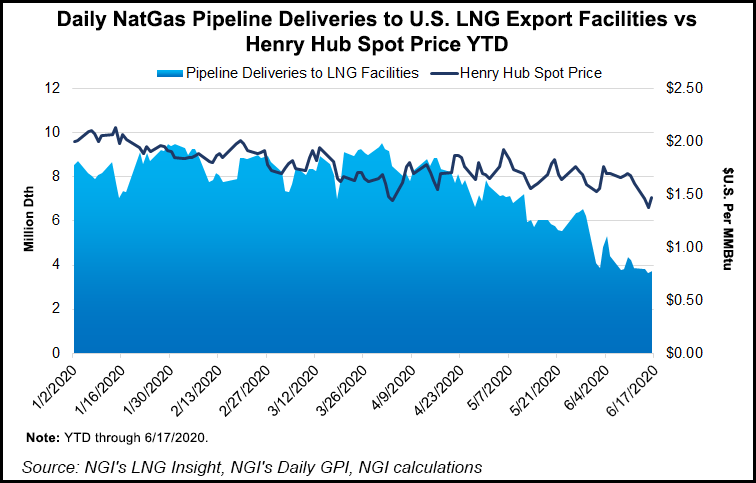 The declines were in line with Nymex futures market behavior over the same period, in which prices started retreating late last week and continued to plummet through Tuesday despite only minor changes in Lower 48 production and liquefied natural gas (LNG) feed gas demand. Instead, with a stalled weather system holding daytime temperatures in the Northeast in the upper 60s to low 80s, and some exceptionally cool mornings and low humidity throughout the South, soft cash prices played a much bigger role in the direction of futures this week.

As of Wednesday, July Nymex futures stood close to the bottom of their monthslong trading range at $1.638/MMBtu, which was down about 18 cents from June 11. Similarly steep decreases occurred through the balance of summer (July-October), which averaged $1.760, while the winter strip (November-March) fell 8.0 cents to around $2.760 and the summer 2021 strip dipped only 3.0 cents to $2.530.

At the same time, the ability of storage demand in the South Central region to manage brief periods of oversupply is hampered by elevated storage levels, the firm said. Salt storage inventories are tracking higher than peak end-of-season inventories in either 2018 or 2019, according to EBW, part of a more widespread overhang in storage stocks across the United States.

On Thursday, Lower 48 inventories were reported by the Energy Information Administration (EIA) to have increased by another 85 Bcf, lifting total working gas in storage to 2,892 Bcf. This is 722 Bcf higher than year-ago levels and 419 Bcf above the five-year average of 2,473 Bcf.

In the South Central region, 18 Bcf was injected into nonsalt storage facilities, but only 1 Bcf was added to salts, EIA said. Enelyst managing director Het Shah said the EIA figures for the South Central indicate that heat soaked up much of the gas flowing in the region during the reporting period. However, he expected higher salt injections to be reflected in the next EIA report given the recent milder weather in the South.

Elsewhere across the country, the Midwest injected 26 Bcf into storage, while the East added 23 Bcf to stocks, according to the EIA. The Mountain and Pacific regions continued to build inventories by less than 10 Bcf week/week.

Looking ahead to the next EIA report, market observers on Enelyst generally agreed that early indications pointed to a triple-digit storage build because of the unusually moderate conditions across the country. Shah is currently projecting a build of 106 Bcf, driven by a 2.2 Bcf/d week/week decline in power demand.

Mobius Risk Group analyst Zane Curry said based on this week’s data, it is reasonable to expect a salt storage build of more than 15 Bcf next week, and it would be “surprising” to see anything less than a 10 Bcf injection. This would compare with the same week last year when salt storage was unchanged, he said.

Possibly more critical is that salt storage could push near 375 Bcf with 19 weeks left in the 2020 injection season, according to Mobius. Maximum capacity is reported to be slightly above 400 Bcf.

“The storage buffer provided by salts is very thin, and LNG export weakness is leaving gas stranded near the Gulf Coast,” Curry said.

Regarding LNG exports, “there are some green shoots emerging” with prices at European benchmarks National Balancing Point and Title Transfer Facility both having finally moved back above Henry Hub this week, according to Curry. However, the transport spreads are still too thin to warrant returning to “normal.

“Considering cargo cancellations in July were likely made more than a month ago, the headwind this component of U.S. gas balances holds should remain intact through peak cooling season,” Curry said.

To date this month, LNG feed gas demand has plummeted to only 4.0 Bcf/d, a 2.7 Bcf/d (40%) month/month decline from May levels, EBW noted. The firm has speculated that incredibly weak LNG demand may force analysts and trading houses to revise down summer demand expectations, and it is possible this process has contributed to recent weakness for Nymex injection season contracts.

“Still, 4.0 Bcf/d is by no means a firm floor for exports, and further declines are likely in July and August as European demand remains feeble and South American winter space-heating demand is hobbled by the coronavirus,” EBW said. “Further, LNG imports into either Mexico or even, while unlikely, the Lower 48, directly could further reduce demand for U.S.-sourced natural gas.”

Heat may be the only salvation for near-term Nymex natural gas prices in the coming weeks, Curry said. On the contrary, cooler-than-normal weather would have increasingly detrimental effects on the front of the natural gas curve, “unless production declines accelerate.”

As for the latest weather guidance, American and European modeling shifted slightly cooler compared to Wednesday, but the overall pattern remains hotter-leaning, according to Bespoke Weather Services. The strongest anomalies remain in the North and in parts of the West, with the key areas in the southern United States staying closer to normal levels, the firm said.

“This limits the bullishness of the pattern, despite healthy gas-weighted degree day totals over the next couple of weeks,” chief meteorologist Brian Lovern said. “Nothing has changed, big picture wise, with the transition to a La Niña state favoring a hotter balance of summer.”

Meanwhile, Lower 48 production remains far below late-November highs, although some incremental volumes have pointed to a recovery off May lows. The potential to lift production curtailments imposed following the April oil market collapse may limit any medium-term upside in Nymex futures, according to EBW.

“We have repeatedly highlighted the potential restart of shuttered oil production leading to an influx of associated gas, and this trend is likely to continue as demand rises for both commodities and the market can absorb additional supplies.”

Although heat has yet to be sustained in the eastern United States so far, forward prices across the region posted smaller-than-normal declines than most other markets. One potential reason for the not-so-steep losses could be because of some operational constraints along Texas Eastern Transmission (Tetco) in the wake of the May explosion on a portion of the system in Kentucky.

To comply with an amended corrective action order issued by the Pipeline and Hazardous Materials Safety Administration, Tetco plans to implement operating conditions that are to go in effect between Tuesday and next Thursday (June 23-25) until further notice.

The most important update, according to Genscape Inc., is that eastbound capacity into M3 is to be significantly reduced. Although the affected Uniontown compressor is in Tetco’s M2 zone, it is the constraint point immediately upstream to both M3 lines, Genscape analyst Josh Garcia said.

As temperatures get higher, downstream demand is expected to increase. Last summer, flows through Uniontown surpassed 2.58 Bcf/d by late June, averaged 3.08 Bcf/d during the peak flow period between mid-July to the end of August, and then peaked at 3.64 Bcf/d on Sept. 11, 1.1 Bcf/d above the upcoming operating capacity, Genscape data show.

Tetco also is set to adjust capacities through its 30-inch diameter system, lowering capacity through most of the compressors upstream of Owingsville by up to 533 MMcf/d, but increasing capacity through Owingsville by 130 MMcf/d. Although overall export capacity has been increased at Owingsville, upstream export capacity is significantly reduced, especially at Wheelersburg. “As Tetco satisfies regulatory and safety requirements, it will increase capacities through affected segments over time,” Garcia said.

Farther downstream, prices along Transcontinental Gas Pipe Line (aka Transco) also posted smaller-than-average decreases. Transco Zone 6-NY fell 11.0 cents to $1.435, while the balance of summer dropped 10.0 cents to $1.350, according to Forward Look. Winter prices were down only a penny to $4.43, and the summer 2021 strip slipped 3.0 cents to $2.170.

Meanwhile, it appears some highly anticipated pipeline additions in the Rockies may be slightly delayed. Genscape noted that lagging construction timelines for the final tie-ins and restoration levels have pushed the service date for both the Cheyenne Connector and Cheyenne Hub Expansion projects nearly a month past their tariff-targeted date of May 25.

In a filing this week, Cheyenne Connector indicated that it now anticipates “mechanical completeness” by Sunday (June 21). Genscape said the pipeline has committed to filing an additional supplement confirming completion on Monday (June 22) and plans to request in-service for the following day. The Cheyenne Hub project on Rockies Express Pipeline (REX) has filed a similar statement requesting parallel service approval for Tuesday, though construction at the requested facilities wrapped last Monday (June 15.)

These projects would add 600 MMcf/d of incremental throughput from the Denver-Julesburg Basin up to and via REX to various demand markets.