Natural gas for the extended holiday weekend worked lower Wednesday at nearly all market points as weather forecasts called for temperatures at or above seasonal norms. 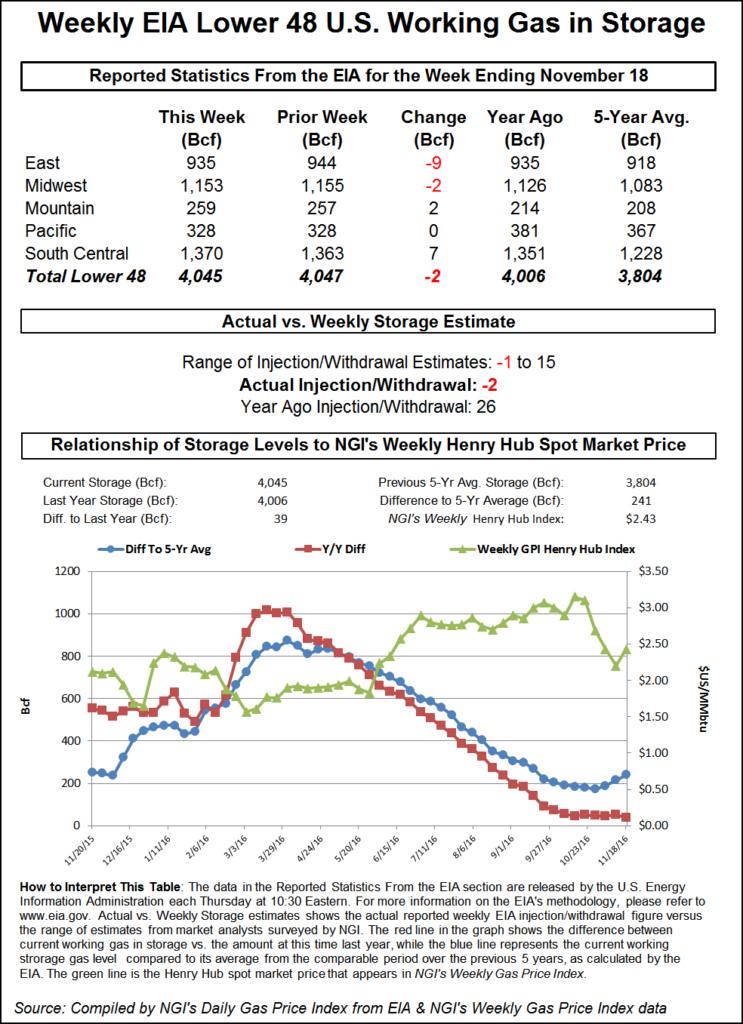 A few points were unchanged, and a few locations added a few pennies, but the NGI National Spot Gas Average fell 8 cents to $2.63.

Eastern points took the greatest hits, with at least one location falling by double-digits. Futures got a boost from an inventory report showing the season’s first storage draw, a 2 Bcf pull which caught traders expecting a modest build off guard.

Natural gas futures surged past $3 Wednesday morning after the Energy Information Administration (EIA) reported a storage withdrawal that was not what the market was expecting. EIA reported a 2 Bcf storage withdrawal in its noon EST release, while traders had been expecting a build of about 5 Bcf. December futures reached a high of $3.057 immediately after the figures were released and by 12:15 p.m. December was trading at $3.028, up 4.6 cents from Tuesday’s settlement.

“We looked at the way the number popped and said that has got to be a draw, but we looked at the screen and it was showing a 2 Bcf build,” a New York floor trader told NGI. “Crazy stuff. If that had happened in the old days, it would have been chaos.

Wells Fargo Securities analyst David Tameron said the 2 Bcf withdrawal “was well below consensus and 11 Bcf below last year’s mark, while the five-year average withdrawal of 45 Bcf was heavily influenced by the 162 Bcf withdrawal figure in 2014. Natural gas storage likely peaked last week and our model currently forecasts a draw of 49 Bcf next week.”

Traders are optimistic prices can hold if not advance short term.

“The latest weather forecast is calling for cold. There is a pattern coming out of Alaska and making its way to the Northeast,” a trader with McNamara Options told NGI. “It could potentially bring some cold Canadian air, but they can quickly change. The risk is to the upside.

“We are coming into a long weekend, and even though you can trade on Friday, no one wants to hold a short position over the long weekend.”

Inventories now stand at 4,045 Bcf and are 39 Bcf higher than last year and 241 Bcf more than the five-year average.

In the East Region, 9 Bcf was withdrawn, and the Midwest Region saw inventories decrease by 2 Bcf. Stocks in the Mountain Region rose 2 Bcf, and the Pacific Region was unchanged. The South Central Region added 7 Bcf.

Weather forecasters continue to wrestle with models unable to show a clear consensus. “Confidence continues to be lower than usual during this period as models struggle with the evolution of the MJO [Madden-Julian Oscillation] and show disagreements in how the U.S. pattern responds to that signal,” said MDA Weather Services in its Wednesday morning 11-15 day forecast.

“This forecast gives consideration to a MJO response out of phases 3-4, but a small colder adjustment is noted in parts of the Eastern Third due to storm-based variability. Overall, the period remains warmer than normal,” per national gas-weighted heating degree days, “with a coverage of aboves spanning from the Midwest to the East.

“Colder threats are found in the West and supported by a Pacific regime featuring +WPO [Western Pacific Oscillation] and -PNA [Pacific North American] signals. Still warmer risks exist in the Eastern Half, focused ahead of low pressure on day 6 in the Midwest and at mid-period in the East. The West could be colder with more widespread below normal coverage there.

“Risks continue to lie in the colder direction of forecast, with the greatest risk for colder versus forecast being in the West. The colder risk is seen in the East as well, but models are split there.”

In physical trading, temperatures were seen at or above seasonal norms, thus taking some of the luster off the strong screen. AccuWeather.com forecast that New York City’s Wednesday high of 47 degrees would rise to 53 by Saturday before easing to 50 by Monday, 1 degree below normal. Chicago’s high of 46 Wednesday was seen rising to 48 on Saturday and reaching 50 on Monday, five degrees above normal. Dallas’ Wednesday maximum of 66 was expected to ease to 65 by Saturday before climbing to 69 by Monday, also five degrees above normal.

Other major market centers also felt the selling. Gas at the Chicago Citygate fell 7 cents to $2.70, and deliveries to the Henry Hub were flat at $2.74. Gas on El Paso Permian changed hands 10 cents lower at $2.48, and packages priced at the PG&E Citygate came in 6 cents lower at $3.19.