With early-season heat that boosted demand over the Memorial Day holiday week dissipating during the first week of June, natural gas forward prices plunged as weather outlooks showed continued mild temperatures for most of the remainder of the month, according to NGI’s Forward Look. 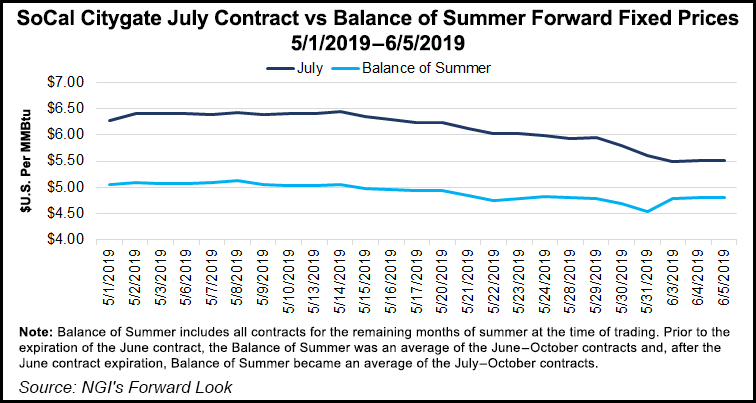 The sell-off in natural gas forward prices for the May 30-June 5 period was intense, leading to nearly 20-cent declines for the remaining summer strip (July-October) and losses of more than a dime for the upcoming winter (November 2019-March 2020). Similar action was seen in the Nymex gas futures curve, where the July contract tumbled down to $2.378 by Wednesday.

Continually cooling weather outlooks for June were the primary driver of this week’s sell-off, with any intimidating heat not expected until after June 20 at the earliest. In fact, as it is now, the middle third of June is enough to have Bespoke Weather Services’ projected June gas-weighted degree day total be the lowest since 2004, which was also an El Niño summer, though a rather weak one.

Futures continued to decline following the Energy Information Administration (EIA) — one week after reporting a massively bearish storage injection — delivered another whopper on Thursday. The EIA reported a 119 Bcf injection into storage inventories for the week ending May 31. The build was well above last year’s 93 Bcf injection and the five-year 102 Bcf average build.

Ahead of the report, the majority of analysts had expected a build closer to 110 Bcf. Intercontinental Exchange settled Wednesday at a 110 Bcf injection. NGI projected a 111 Bcf build.

“I think there was Memorial Day impact. Just didn’t see it in the scrapes I saw. Shouldn’t have assumed it away,” said Flux Paradox LLC President Gabriel Harris on Enelyst, an energy chat room hosted by The Desk.

Nymex gas futures responded swiftly to the EIA data. The July contract was trading about a penny higher day/day at around $2.39 about 10 minutes ahead of the EIA’s 10:30 a.m. ET report. The prompt month fell to $2.354 as the print hit the screen and then to a three-year low of $2.305 before ultimately settling Thursday at $2.324, down 5.4 cents on the day.

While some analysts believe prices are already nearing a bottom with little room for additional downside ahead, Harris said he didn’t see a reversal on the recent price trend until August becomes the prompt month. “Anyone who will get desperate for supply in July is already in decent shape.”

Balance wise, the 119 Bcf build is barely tighter than last week’s extremely loose 114 Bcf print, indicating that there is simply more supply in the market than what the data is showing, according to Bespoke. The firm had projected a build of 110 Bcf.

“Given the improvement we have seen in balance data” for the June 3-7 week, the firm still believes the next EIA print will reveal tightening has occurred, “but it is harder to trust given the perceived supply inaccuracies in the data,” Bespoke chief meteorologist Brian Lovern said.

With prices at multi-year lows, the market reaction to recent bearish news seems overdone, according to EBW Analytics. Even as weather models continued to trend cooler for June, bearish forecast indicators, including a currently mild El Nino and elevated soil moisture in the central United States, are likely to fade by mid-summer.

Hotter weather requires more inefficient gas units to keep the lights on, leading to a larger fundamental impact potentially 1.5 times the impact of a reduction in CDDs of the same magnitude, the analytics firm said. Furthermore, particularly in early summer, the market may take a warmer revision as an indication of hotter temperatures to come.

A sustained trend toward hotter summers — and last year’s record heat despite little advance indicators — highlight potential bullish impacts, according to EBW. “Although moderate temperatures in May and June have narrowed risks, the potential for a 100-150 Bcf bullish surprise still remains.”

Increased liquefied natural gas (LNG) and Mexican exports also provide tailwinds for the market, as does slower production growth. The first cargo from Cameron LNG’s export terminal in Hackberry, LA, set sail last month, and cargoes from Cheniere Energy Inc.’s Sabine Pass and Corpus Christi export facilities are also expected to ramp up this summer. Altogether, export capacity it set to more than double from last year to more than 7 Bcf/d by the end of 2019.

On the production front, Ultra Petroleum Corp. is the latest producer to cut capital expenditures for 2019 in a bid to curb spending and improve results. Although the company’s production surpassed the midpoint of guidance in the first quarter, it still was down from 2018 levels.

For Appalachia’s natural gas-heavy exploration and production (E&P) companies, downward pressure on strip pricing is expected to lead to even deeper spending cuts as they try to operate within cash flow and deliver on this year’s plans. Antero Resources Corp., Gulfport Energy Corp. and Chesapeake Energy Corp. are some E&Ps that have announced that they’ll cut spending and activity levels this year.

For its part, EBW projects that prompt-month natural gas futures will climb back toward $2.80 by late July/early August.

Despite persistent heat out West, California markets posted the most substantial declines across North America during the May 30-June 5 period, although it’s important to note that prices remain at a solid premium to most other pricing locations, according to Forward Look.

At SoCal Citygate, July tumbled 28 cents during that time to reach $5.515, which is a more than $3 premium to the benchmark Henry Hub July contract. August also dropped more than a quarter to $5.609, while the balance of summer plunged a quarter to average around $4.80. The winter strip was down a dime to $4.26.

The steep sell-off occurred even as Southern California Gas (SoCalGas) postponed the return-to-service of its import line L235-2 again by nearly a month, citing additional small leaks discovered during progressive restoration, according to Genscape Inc. This change could keep SoCalGas’ system tighter through the summer and into the fall, which could put upward pressure on forward prices.

“This cycle of attempting to restore limited pressure to the line but finding additional leaks has happened numerous times over the last several months,” Genscape analyst Joe Bernardi said. The most recent postponement pushes the return-to-service to July 5 from June 8, a 27-day delay. This is the biggest modification to this schedule since April 24, when the return to service changed to June 4 from May 8, according to Genscape.

In the three trade dates following that postponement, 3Q2019 basis futures for SoCal Citygate rose by more than 60 cents, up to $3.40 from the month-to-date average of $2.76.

“At that time, SoCal storage inventories were essentially even with the two-year post-Aliso Canyon leak average, whereas now those inventories are comparatively higher, which could reduce the magnitude of the change in futures,” Bernardi said.

Indeed, it appears that, for now, California traders have disregarded the delay as prices throughout the forward curve softened.

Across the northern border in Western Canada, forward prices held up relatively well during the May 30-June 5 period compared to those in the United States. That’s likely due to demand growth in the province, the need to replenish severely depleted storage inventories and maintenance restricting some producing areas, according to Genscape.

Alberta production has been averaging around 11.53 Bcf/d so far this summer to date. Though this trails last summer-to-date’s average by 47 MMcf/d, it is more than 0.73 Bcf/d greater than the prior five-year summer-to-date average.

Demand this summer so far has averaged 4.73 Bcf/d, Genscape said. As with production, this only trails last year’s to-date level by a small amount (15 MMcf/d) but is more than 0.75 Bcf/d above the five-year average. However, this has also been the coolest start to an Alberta summer since 2014.

“When looking at demand on a weather-normalized basis, we continue to see the consistent structural growth taking place this summer. On a weather-normalized basis, provincial demand is averaging 5.04 Bcf/d, more than 0.3 Bcf/d greater than demand at the same temperature range during the same time period last year,” Genscape senior natural gas analyst Rick Margolin said.

Meanwhile, regional storage inventories significantly trail normal levels. Alberta storage started posting consistent injections in late March and has since been injecting an average of around 0.35 Bcf/d, according to Genscape.

While this is a decent amount more than last summer-to-date’s average rate, it is substantially slower than the five-year average. Alberta current reported inventories are around 125.4 Bcf, which is 54.2 Bcf less than last year and 67.4 Bcf below the prior three-year average.

“AECO prices should draw some support from the collective need to replenish storage and serve demand growth while production faces headwinds from maintenance,” Margolin said.

NGI price data shows NOVA/AECO C cash basis is currently around minus $1.69/MMBtu. This summer to date, it has averaged minus $1.66, which is about 17 cents stronger than last summer to date, “though notably weaker than previous summers when basis was well within $1.00 under Henry Hub,” Margolin said.