A rail tank oil transport bill making its way through the Washington legislature is stirring anxiety 1,200 miles to the east in the Bakken Shale and has captured the attention of the Western States Petroleum Association (WSPA), which wants to modify it. 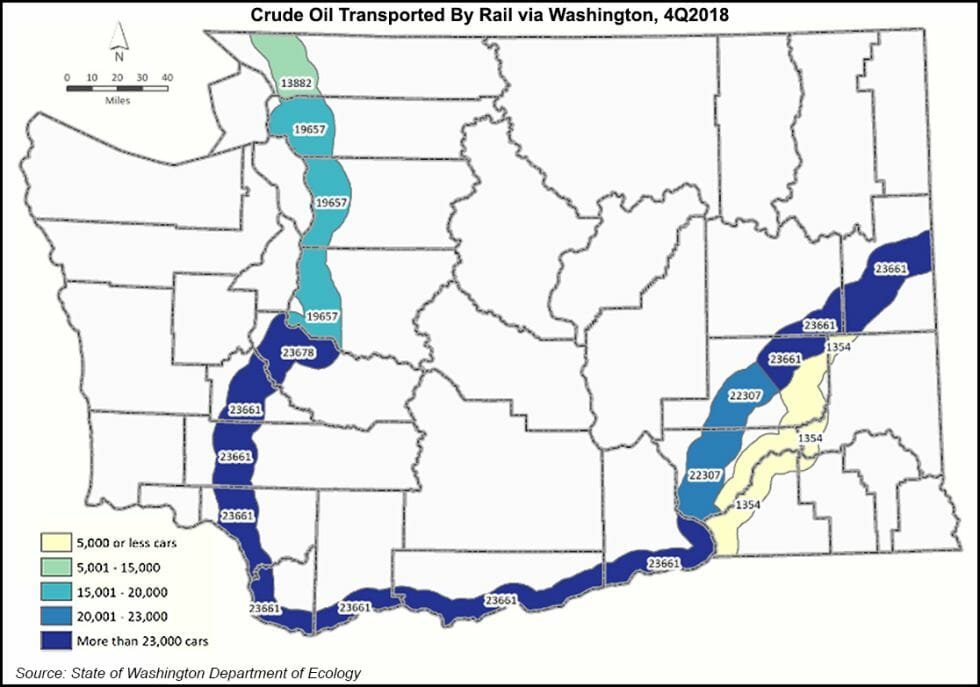 At issue is a standard for allowable vapor pressure in rail tank cars that carry crude. Senate Bill (SB) 5579 originally called for a pressure limit of less than 9 pounds/square inch (psi) for Bakken crude, but the bill has since been modified to include all crude supplies transported by rail.

The state Senate agreed to the change last month and House lawmakers followed suit earlier this month. SB 5579 is now headed back to the Senate to try to concur with amendments added. Democratic Gov. Jay Inslee has indicated he will sign it into law if it reaches his desk.

SB 5579 covers oil rail terminal facilities loading/unloading crude and requires those terminals to report to the Washington Department of Ecology on the type and vapor pressure of each oil shipment received.

North Dakota Department of Mineral Resources Director Lynn Helms earlier this month said state officials had been “very engaged” in finding solutions to the Washington legislation as it is a “real threat” to the value of Bakken crude. “WSPA has been working real hard on more amendments.”

While amendments to the bill call for a delay in it taking effect, WSPA President Catherine Reheis-Boyd said the industry remains opposed. “This policy is not supported with scientific data behind the premise of the bill that a lower vapor pressure improves safety.” She said the only thing the bill does is “cap the safe and affordable transportation of crude oil into the state.”

North Dakota Petroleum Council (NDPC) Vice President Kari Cutting said Bakken producers have been discussing the proposed legislation with WSPA for awhile, given that 225,000-275,000 b/d of Bakken crude is shipped by rail to the West Coast, according to North Dakota officials.

NDPC has provided WSPA with data and science surrounding the issue, but Cutting thinks it is certain the bill will become law, making amendments by the WSPA more critical.

“The bill passed the Senate before we were ever aware of it,” Cutting told NGI‘s Shale Daily on Tuesday. For the House committee hearings, the NDPC provided witnesses that “definitely helped get some facts on the table,” she said, adding that the bill is arbitrary because there are no scientific facts to prove a vapor pressure limit below 9 psi makes oil handling any safer.

“I don’t see that there is going to be much resistance going forward, and at this late date it will pass and go to the governor,” she said.

A two-year delay for the standard to take effect was added to SB 5579, but the bill stipulates that if refineries keep their current rail-delivered volumes, the delay would not be triggered. Volumes would have to reach levels 10% higher than 2018. The lower pressure requirement would apply to any new facilities built after Jan. 1, 2019.