In the aftermath of the rejection of major energy projects, Washington stakeholders are trying to determine what the future holds for oil and natural gas in the Pacific Northwest. 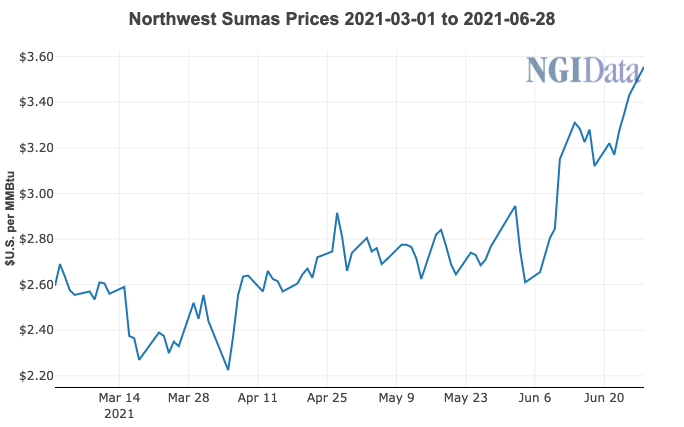 Two years ago, Washington’s Clean Energy Transformation Act (CETA) mandated carbon-free electricity by 2045. The use of natural gas was mandated until 2045 for up to 20% of electricity requirements, “provided that this use is offset by alternative compliance instruments such as renewable energy certificates.”

NWGA members own and operate more than 120,000 miles of energy delivery infrastructure in British Columbia, Idaho, Oregon and Washington. Members service more than 10 million homes and 350,000 businesses in the region, Kirschner said.

According to the U.S. Energy Information Administration, more than 102 Bcf was used in Washington for gas-fired generation in 2019. In 2019, annual gas demand topped 345 Bcf, with 89.9 Bcf for residential use, 61 Bcf for commercial and 78.4 Bcf for industrial, according to NWGA. Puget Sound Energy and Avista Utilities deliver the bulk of supply.

“The gas industry is in the crosshairs right now, and it is really important that we get our story straight because the infrastructure that we manage is critically important, said NW Natural CEO David Anderson, who also chairs the American Gas Association. He spoke earlier in June at the NWGA’s annual meeting.

“The Pacific Northwest is a winter peaking region for energy, and the electric system is already pushing the limits for capacity during those coldest days,” said NW Natural spokesperson Dave Santen. Twelve percent of the Portland, OR-based utility’s 775,000 meters are in southwestern Washington.

“Like the electric grid, the gas system increasingly conveys renewables and will continue to decarbonize as supply technologies like hydrogen and demand technologies like gas-fired heat pumps mature,” Kirschner said. “We are confident that policymakers understand and appreciate the inherent value of a diverse energy mix in affordably securing a reliable, resilient decarbonized energy future.”

However, some supporters are not as confident. For example, in Port Kalama, WA, a gas-based methanol project recently decided to not move forward. The Port executive director Mark Wilson said the project was politicized.

“The loss of this project is devastating for our community, state and the planet,” he said. “It means fewer jobs and economic opportunity, a chilling effect on economic development and innovation, and continued reliance on coal-produced methanol for olefins.”

The project carried “remarkable benefits,” such as more than 1,000 union construction jobs for three years, and 200 permanent jobs. It also would have increased local taxes to pay for education, public safety, road, social service and other needs in Kalama and Cowlitz County.