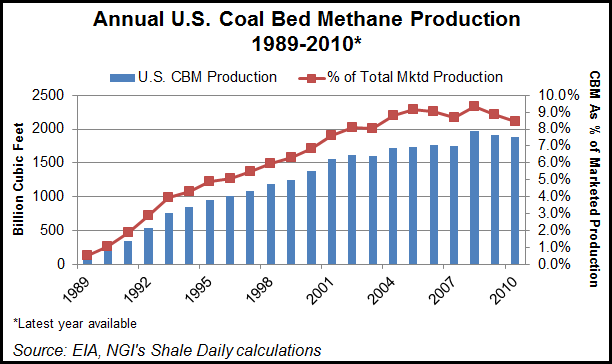 The wells are expected to be placed into sales late this year. Warren said it will increase its 2013 capital expenditure budget to $73 million from the previously announced $58 million to cover the cost of the drilling program.

“Given the recent increase in natural gas pricing, and the continuing lower basis differential between Nymex and Rocky Mountain gas, we believe the 25 new CBM wells will provide good value and attractive rates of return,” said Warren CEO Philip A. Epstein. The company also said that it is required to drill at least 25 wells a year to maintain and perpetuate its portion of the 113,000 gross-acre Spyglass Hill Unit.

“Natural gas from the Spyglass Hill Unit flows through Warren’s 100% owned pipeline system, which provides substantial cost savings on a project basis. Additionally, Warren will be applying a new well stimulation design to the 25 CBM wells and embarking on a stimulation program in a number of existing wells to further increase gas production and leverage our infrastructure.

“The 25-well drilling program will perpetuate the Spyglass Hill Unit with its large natural gas resources and preserve all leases within the Unit to all depths as we continue to evaluate our approximately 72,000 net acres of deep oil potential.”

The economics of the Washakie Basin indicate upside for Warren’s plans, according to Ray Deacon, an analyst at Brean Capital.

“There’s a 30-35% rate of return at $4.25/Mcf gas long term, so I think it does make since to be drilling,” Deacon told NGI‘s Shale Daily. “You’ve already dewatered most of the coals in that unit, so it’s not like early on in the play, where you had to drill wells and they produced water for 18 months. Once you go through that, incremental capital doesn’t need as high a gas price. They’re also looking at fracking the wells, which they haven’t done in the past, and they feel like that could help rates of return even more.”

Warren last year acquired natural gas and midstream assets from subsidiaries of Anadarko Petroleum Corp. in the Atlantic Rim Project Area (ARPA) in the Washakie Basin, including an interest in the Spyglass Hill Unit (see Shale Daily, Sept 6, 2012). Warren, which was a working partner with Anadarko on a number of the assets, decided to exercise its preferential rights to purchase Anadarko’s share after learning that Anadarko was soliciting bids for all of its operated CBM assets in the Atlantic Rim Project (see Daily GPI, Aug. 9, 2012).

ARPA, which comprises more than 270,000 acres of land in south-central Wyoming, has been under development since the 1950s. In 2001 a consortium of producers that ultimately included Anadarko, Warren and Double Eagle Petroleum Co. submitted a proposal to the Bureau of Land Management to drill more than 3,880 gas wells in the ARPA. The project has been expected to produce 1.35 Tcf over its 30-50 year life span.