An increasingly hot climate does not bode well for U.S. natural gas, as a projected 0.1% decline in average degree days forecast over the next 10 years is expected to boost storage inventories by an additional 600 Bcf, according to analysts at Raymond James & Associates Inc. 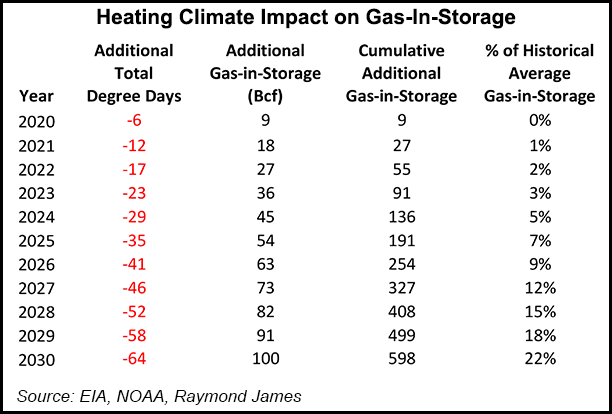 Using data from the National Oceanic and Atmospheric Administration, the Raymond James team on Monday said it analyzed a 60-month moving average and found that cooling degree days (CDD) have increased to more than 120 days/month in the past few years from less than 100 in the 1970s, representing a compound annual growth rate (CAGR) of 0.6%. By contrast, heating degree days (HDD) have decreased from more than 400 days/month in the 1970s to less than 350 in the past few years, representing a CAGR of minus 0.3%.

Examining the absolute numbers, analysts found that HDDs decreased by more than 50, while CDDs increased by only about half as much. Analysts pointed out that the average temperature in the Lower 48 states in 2019 was 52.7 degrees, which, by definition, means that there were more HDDs than CDDs.

Regardless of which type of degree day, for every one degree day less, the Raymond James team determined that U.S. gas storage increased by 1.6 Bcf, which is “emphatically unhelpful for gas demand.” To be sure, plump storage resulting from a mild winter and weak demand from Covid-19 has left gas pricing near historic lows, with persistent concerns of containment by the fall.

“More gas in storage would represent a structural headwind for gas prices, which is among the reasons for our subdued long-term Henry Hub forecast of $2.50/Mcf,” the Raymond James team said.

Over the past five years, the annual average has been 5,584 total degree days/year, according to analysts. Applying the historical CAGR to the next 10 years on a cumulative basis, there would be 383 fewer total degree days, they said. Multiplying the days by 1.6, the theoretical outcome is 598 Bcf more gas in storage by 2030, which equates to 22% on top of the average storage level, 2,734 Bcf, over the past five years, all else being equal.

“While a heating climate is negative for gas demand from a national perspective, the regional impact is far from uniform,” said analysts led by Pavel Molchanov.

The regions with the most HDDs are the Upper Midwest and New England, whereas Texas and the states around it have the least. For CDDs, Texas and neighboring states have the most, followed by the Southeast, whereas New England has the least. The West Coast has a modest amount of both HDDs and CDDs.

Based on current forecasts, Bespoke Weather Services expects June degree days to total 277.5 degree days, which would rank third highest in the last five years, behind 2016 and 2018, and seventh highest in the 2000s.

Raymond James noted that short-term gas market dynamics can still be bullish, as is the case with its $3.50/Mcf forecast for 2021 because of the projected decline in oil and gas production this year. Furthermore, modeling future climate change is “inherently uncertain,” the team said.

To be sure, cities and states across the country continue to press ahead with aggressive measures to slow climate change. California has been at the forefront of implementing policies calling for all-electric new buildings, while others are introducing policies mandating retrofits of inefficient buildings by requiring them to meet standards that cap their energy use or carbon emissions.

The American Council for an Energy-Efficient Economy (ACEEE) said in the past 18 months, New York City, St. Louis, the state of Washington and Washington, DC, have enacted building performance standards. Similar proposals are under consideration in Boston, Colorado and Montgomery County, MD, among other places.

“We have lots of good voluntary programs that help building owners improve energy efficiency, but the truth is they’re just not nearly enough when you look at the climate math,” said ACEEE executive director Steven Nadel.

With most buildings today to be in use for decades to come, without limits on the carbon they’re responsible for, “terrible” climate impacts will be locked in, according to Nadel. “Building performance standards are an effective response because policymakers set overall limits and let the building owners decide which upgrades they’re going to implement to meet them.”

Meanwhile, investors have wasted no time in accelerating spending in renewable energy since Covid-19 crushed natural gas and oil demand. Goldman Sachs said renewable power investments may be the largest area of spending in the energy industry in 2021, “surpassing upstream oil and gas for the first time in history.”

BP plc, which in mid-February vowed to become a net zero company by 2050, also indicated the energy transition away from fossil fuels may come sooner than expected. Management for the Lower 48’s largest natural gas marketer said countries recovering from the pandemic may “seek to ‘build back better’ so that their economies will be more resilient in the future.”

Moody’s Investors Service added that demand recovery in the wake of Covid-19 will take time, and analysts don’t expect energy demand this year to rebound as much as economic growth.