The saying goes that all good things must come to an end, and for the natural gas market, that happened on Wednesday as prices retreated following a three-day rally that sent the prompt month some 30 cents higher. With a warmer turn in the latest weather forecasts, the May Nymex gas futures contract settled at $1.783, down 6.9 cents day/day. June fell 5.3 cents to $1.896. 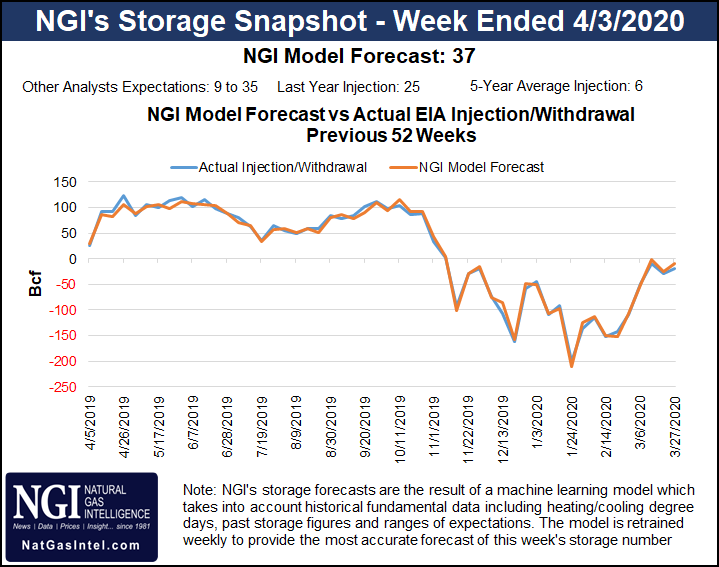 Considering the winter left much to be desired, the colder-trending outlook for April has provided the gas market an unexpected adrenaline rush during what is typically a far less volatile time of year. However, while April remains on track to be on the colder side of historical norms, major weather models trimmed off some demand for the next couple of weeks.

“But even with a little milder trends in recent runs, the pattern is still solidly bullish/chilly April 10-19 besides a brief break this Sunday,” NatGasWeather said. “It’s now the April 20-23 period that needs to be a little colder.”

Weather aside, the market continues to look for guidance on the impacts of the Covid-19 pandemic on demand. Last week, the first glimpse of those demand losses were reflected in the Energy Information Administration’s (EIA) weekly storage inventory report. The EIA said that inventories fell 19 Bcf for the week ending March 27, a draw that left total working gas in storage at 1,986 Bcf, 863 above year-ago levels and 292 Bcf above the year-average of 1,694 Bcf.

For Thursday’s EIA report, scheduled for release at 10:30 a.m. ET, analysts are predicting an injection between 9 and 33 Bcf. A Wall Street Journal poll of 12 analysts showed estimates averaging at a 21 Bcf build. Respondents to a Bloomberg survey arrived at a similar range, with a median build of 24 Bcf. A Reuters survey also was looking for a 24 Bcf injection, with a 9 Bcf to 35 Bcf build range. NGI’s model estimated the injection at a much larger 37 Bcf.

These figures compare with a 25 Bcf increase in storage in the same week last year and the five-year average injection of 6 Bcf, according to EIA.

On the supply side, production figures are starting to show the impact of low commodity prices, with Genscape Inc. noting that daily production prints have been posting notable declines. While the firm can pinpoint “a good portion” of the drops to maintenance in certain regions, some of the declines are likely reactions to the rapid collapse of prices.

Rystad Energy also observed that the U.S. rig count has fallen much faster than expected. From a peak of about 620 rigs in mid-March 2020, the oil rig count is forecast by the firm to free-fall to a potential bottom of around 200. It cited guidance from exploration and production (E&P) companies in its latest projections.

NGI Director of Strategy & Research Patrick Rau said that without the demand component, there is little incentive to keep producing. Instead, it’s a matter of survival for many U.S. producers, with many not just reducing capital spending, but also halting share buybacks and stopping dividend payouts. “It’s all about cash in the bank.”

Spot gas prices began to split across the country Wednesday as Western markets started to retreat as a slow-moving weather system with rain and snow was set to blanket California.

Although the weather system could make for wet conditions from the coast over to the Desert Southeast, only modest cooling was expected, “far from cold,” NatGasWeather said.

On the pipeline front, an El Paso Natural Gas force majeure set to begin April 14 could affect 559 MMcf/d of westbound flow to Arizona and potentially hamper delivered volumes to Southern California Gas, according to Genscape. Pipeline anomalies discovered downstream of its Cimarron compressor station during routine maintenance require a segment of Line 2000 to be isolated, cutting flows through the Tom Mix compressor station in southeast Arizona to zero, from a prior 30-day average of 559 MMcf/d, Genscape analyst Matthew McDowell said.

Farther east in the Midcontinent, Natural Gas Pipeline Co. of America (NGPL) declared a force majeure that went into effect on Wednesday and was set to last through April 18 that affects flows through Station 105 in Cloud County, KS, and constrains 450 MMcf/d of the entire Amarillo mainline available capacity.

This event falls in between other large-impact tool runs that NGPL began performing on April 1 and are scheduled to last through mid-month, according to McDowell. However, “similar events that cut Amarillo mainline capacity have shown that NGPL’s Gulf Coast mainline can compensate for increased market area demand, and Chicago Citygate basis volatility has been muted during recent demand events and supply constrictions due to a diverse supply side.”

To be sure, Chicago Citygate cash prices edged up just 1.5 cents day/day to average $1.745, expanding their discount to benchmark Henry Hub by 1.0 cents.