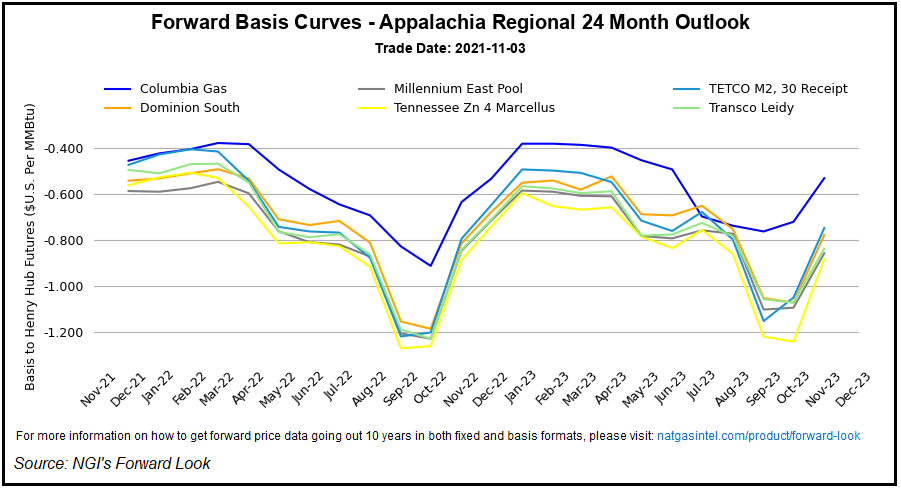 Summer (April-October) prices also softened, but losses were smaller and averaged only 8.0 cents as storage inventories in the United States have improved dramatically over the past two months. At the same time, weather forecasts continue to kick sustained cold weather down the road, setting up an adequate supply trajectory through the winter season that would lessen the urgency in restocking next summer.

Despite the lack of widespread cold in the Lower 48, forecasts do show at least some bouts of chilly weather over the next month. NatGasWeather said a weather system is expected to linger over the Midwest and East through Friday, resulting in crisp overnight temperatures in the 20s to 30s.

Chicago’s balance-of-winter strip also was down 9.0 cents to $6.06, while summer prices averaged 7.0 cents lower at $3.880, according to Forward Look.

Beyond this week, weather forecasts showed mild/warm high pressure favored to strengthen and expand over the eastern two-thirds of the country late this weekend through next week. Highs were seen reaching the mid-50s, easing national demand to “very light levels and where the latest data remains exceptionally bearish,” according to NatGasWeather.

There’s still expected to be a relatively chilly weather system exiting the West late next week, the forecaster said. The system would initially track across the Midwest, then into the East the weekend of Nov. 13-16 for closer to normal national demand. Warmer weather should follow, though, likely keeping storage withdrawals to a minimum for much of November.

After a material step-up in injections in September and October, U.S. storage inventories closed out the traditional injection season at 3,611 Tcf. This is a far cry from the sub-3.4 Tcf levels some market observers had projected earlier in the summer.

The Energy Information Administration (EIA) on Thursday delivered the final build of October, reporting a 63 Bcf injection for the week ending Oct. 29. The figure was in line with estimates ahead of the EIA’s weekly inventory report and crushed both year-ago and five-year average builds. EIA recorded a 27 Bcf injection for the year-earlier period, while the five-year average is a build of 38 Bcf.

Bespoke Weather Services said the 63 Bcf injection once again reflected loose supply/demand balances, though noted that it was a big week for wind generation. Wind has fallen significantly in the current week, likely resulting in some renewed tightness in the next EIA report. Bespoke lowered its estimate to an 18 Bcf build for the week ending Nov. 5.

“Colder weather will still be required to sustain prices at or above these levels, either way,” it said.

Broken down by region, the South Central posted the largest increase for the week, with stocks rising by 28 Bcf, EIA said. This included a 16 Bcf injection into salt facilities and a 12 Bcf build in nonsalts. The East added 14 Bcf to inventories, and the Midwest added 14 Bcf. The Mountain and Pacific regions each posted a 1 Bcf rise in stocks.

Meanwhile, production also has mounted large gains in recent days, eroding the bullish case for gas prices. EBW Analytics Group pointed out that pipeline flow data often can be inaccurate, the 1.6-2.0 Bcf/d increase in U.S. output has been more rapid than projected.

About half of the supply increase is simply the conclusion of shoulder-season pipeline maintenance, and is already widely priced in, according to EBW. “The other half, however, appears indicative of rising early-winter supply, as producers attempt to capture seasonally higher winter pricing.”

Is the Asia, Europe Battle Nearing An End?

As such, Henry Hub prices remain strong and now are responding primarily to LNG demand, according to Rystad gas analyst Nikoline Bromander.

Asia and Europe have been duking it out all summer in a mad dash to replenish lagging inventories following a harsh winter and then hot summer. With prices escalating to record levels and after several months of restocking, Chinese storages have largely completed their gas injections.

Europe, meanwhile, has seen a spate of conflicting signals since last week’s price decline in the region. The sell-off was in response to Russian President Vladimir Putin’s orders to pump gas to storage in Germany and Austria after domestic stocks were full. However, gas flows into Germany at Mallnow dropped to zero over the weekend, and did not resume for five days, according to Rystad.

“Even though Russia can send gas to Western Europe through other routes, and prices may not be as high as initially feared, they retain an upside risk until additional supplies actually materialize,” Bromander said.

Nevertheless, a sharp decline in coal prices driven by government directives in China and high LNG inventories in the rest of Asia have resulted in market sentiment turning bearish in the near term, according to Rystad. At the same time, all eyes are watching November temperatures and developments in Russia-Europe trade flows.

“However, upside risks persist: the Title Transfer Facility is rife with volatility, and European storage is still inadequate for a harsh winter,” Bromander said. “Additional supplies from Russia to the order of 6 billion cubic meters may not be enough to put off a sharp withdrawal.”

Meanwhile, the Sabine Pass and Freeport LNG export terminals in the United States are grappling with feed gas fluctuation. “Any extensions of Freeport’s feed gas constraints into December may see another cargo taken off the market near peak winter,” Bromander said.