Privately held Antero Resources Corp., which has all of its chips in the Appalachian Basin, plans to raise $1 billion through an initial public offering (IPO) of some of its stock on the New York Stock Exchange, it said in a filing with the Securities and Exchange Commission (SEC). The operator also has increased capital spending plans for the year. 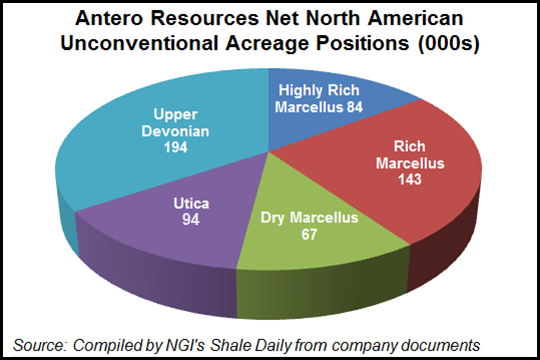 Antero, controlled by private equity firm Warburg Pincus LLC, didn’t indicate how many shares were to be sold or their expected price; the common shares would be listed under the symbol “AR.”

The IPO was announced in combination with plans to bump up capital expenditures (capex) this year by $300 million to $1.95 billion, with nearly all ($1.2 billion) to be set aside for Antero-operated drilling and completion (D&C) activity. The capex increase provides another $150 million for midstream infrastructure, $100 million for more leasehold and $50 million for D&C. Capex in 1Q2013 totaled $548 million.

Most of the D&C budget (85%) is allocated for the Marcellus, where plans are in place to drill 135 horizontal wells. The Utica acreage would take the remaining funds; 21 horizontals are being planned. Through this year, 15 rigs on average will be drilling Marcellus acreage and two are to be working the Utica.

“The $50 million increase in drilling capital will be used to drill one additional horizontal Utica well, to lengthen planned 2013 Utica laterals, as well as to fund the cost of higher working interests in Utica wells, driven by our successful leasing efforts,” management said.

Some money also is being set aside to complete an 80-mile water pipeline system in West Virginia and Ohio to service unconventional drilling projects, which should reduce D&C costs by up to $600,000/well, management said. More than 30% of the planned well completions this year and nearly all (90%) of the wells drilled in 2014 are expected to benefit from the water infrastructure, Antero said. The operator also is funding 25 miles of gas gathering infrastructure in Doddridge County, WV, associated with two new third-party compressor stations.

Antero said it also has hedged 984 Bcfe of future production using fixed price swaps from April 1, 2013 through December 2018 at an average New York Mercantile Exchange (Nymex) equivalent price of $4.87/MMBtu. About 21% of the financial hedges are Nymex hedges and 79% are tied to the Appalachian Basin. “For the Nymex hedges, Antero physically delivers its hedged natural gas through backhaul firm transportation to Henry Hub, the index for Nymex pricing, which eliminates basis risk on these Nymex hedges.”

The producer has about 317,000 net acres in northern West Virginia and southwestern Pennsylvania, as well as 94,000 net acres in the Utica Shale in eastern Ohio. In the first three months of this year, net output jumped 114% year/year and was 21% higher sequentially, mostly because of gains in the Marcellus (see Shale Daily, May 14).

Antero today has 15 operated rigs running in West Virginia; up one from 1Q2013. About 560 MMcf/d gross, or 479 MMcfe/d net, is being produced, including 4,100 b/d of liquids and oil. To date, 170 horizontals have been drilled and completed, with all but three online waiting on pipeline infrastructure, which is expected in August. An additional 42 wells are being drilled and completed.

MarkWest Utica EMG LLC, a frequent Antero partner, plans to process the producer’s rich gas initially at the Cadiz processing facility in Harrison County, OH, beginning this summer (see Shale Daily, June 3). Later this year the gas would be processed at a 200 MMcf/d cryogenic processing facility being built by MarkWest Utica in Noble County, OH, that is nearing completion.