Recompleting existing horizontal wells in the U.S. onshore remains in the nascent stages, but as technology improves, the practice is capturing the attention, and money, of a few select prospectors. 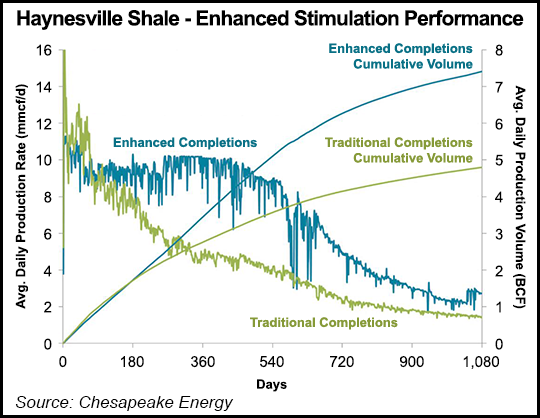 Refractures, AKA refracks, continued to be a much-discussed topic in the recent first quarter conference calls, as oilfield service (OFS) operators touted new technologies and a few domestic exploration and production (E&P) companies cited specific areas where they are testing older wells with some success.

IHS Energy Senior Consultant James Coan said Wednesday during a webinar that domestic E&Ps are “reassessing whether drilling and fracking new wells are the right way to go and whether it may be more advantageous to engage in refracking.”

IHS, which is issuing an in-depth report in June about refracking, estimates that most of the recompletions done to date in older horizontals are in the Bakken, Barnett and Marcellus shales, but it’s a low overall number, accounting for about 1% of the overall fracture market, said IHS managing director Christopher Robart. However, based on data, IHS is forecasting that refracks of the U.S. onshore could increase by as much as 20% in the coming years. What’s most challenging is finding the right candidates, said Coan. The best performing wells are the best candidates, he said. And there’s the rub. Is it worth going into a vintage well that has been pumping out good quantities of oil and gas?

Natural gas producers aren’t doing much in terms of refracking either. For now, it’s a shale oil play, said Coan. And it takes a “large-scale refrack program,” i.e., capital expenditures (capex), to capture the most value.

“The fact that E&Ps are going through this process now and preparing themselves to do refracks means that if the oil price were to increase a little bit they would be prepared to take advantage,” Robart said. Many E&Ps may opt to drill more new wells, foregoing the option to refrack, which often involves custom engineering.

“The most important factor to get this off the ground is for E&Ps, particularly service companies, to make large investments to test this,” Coan said. “Who is going to be the George Mitchell of refrack?” Mitchell, who died in 2013, has been lionized by the industry for pioneering a way to unlock unconventional reserves by combining horizontal drilling with fracking (see Shale Daily, July 29, 2013).

Encana Corp. CEO Mike McAllister said two refracks were completed in the Eagle Ford during 1Q2015; another is planned during the second quarter.

“We have multiple, somewhere in the 100 range, of potential refrack candidates as we look forward,” he said as part of his comments during a quarterly conference call earlier this month (see Shale Daily,May 13). “But it’s all to be evaluated as we better understand the performance.”

Encana CEO Doug Suttles said technical work to date “suggests that we’re only refracking a relatively small portion of the wellbore. And we actually think the technology needs to advance before we push this scale. So we’re going to go slow until the technology gets to where it needs to be.”

Chesapeake Energy Corp.’s Jason Pigott, who oversees southern operations, also talked about refrack prospects earlier this month (see Shale Daily,May 6). “Within our retained portfolio, Chesapeake has drilled 6,750 horizontal wells since 2004. Of these wells, nearly 4,600 were drilled prior to 2012, and we consider these wells under-stimulated compared to our current designs and based on their vintage.”

The Barnett, he said, “has the most easily identifiable concentrations of under-stimulated wells, and was our first asset to focus on for our initial re-stimulation test. To date, we’ve tested nine wells in the play with two different techniques.” Aggregate results resulted in a production increase of nearly 10 MMcf/d, according to Pigott.

There also are “production responses” in the Haynesville Shale that indicate a big refrack program may be in order for Chesapeake. Parent wells have seen a 100% “enhancement from offset drilling with increases in both pressure and rate,” and the company is eyeing all of the base wells to potentially recover incremental reserves through offset drilling or refracks.

Not Everyone is Onboard

“I personally have a lot of experience with refracks, most of which was not that good,” COO Ray Walker told analysts during the recent first quarter conference call. “So we don’t really see refracks as big potential going forward. It’s certainly not anything we’re counting on…My overall statement for refracks is, if you really mess something up the first time, then there’s potential that you could do something if you went back in there…”

The OFS sector is seeing some interest in refracking, but not a lot. C&J Energy Services COO Don Gawick said, “there’s a lot of hype” about recompletions, but “we’re not seeing much, if any, actual activity. It’s literally some very small number of wells have been tried, and there’s been some mixed results.

“I’d say the general feedback from most of our customers is they remain to be convinced of the technique and the validity of being able to go out and reliably predict the kind of well performance you’ll get…I think the jury is still out at least from the perspective of the customers I’ve spoken to.”

Schlumberger Ltd. CEO Paal Kibsgaard, whose company markets some of the customized refrack technology, said the company is reviewing “hundreds of candidate wells, and we’re taking the ones that we believe have the highest potential for increasing production after refracking treatment.”

In terms of market potential, “I think you’re talking billions, in terms of revenue opportunities, over an extended period of time,” Kibsgaard said. “But this is quite a significant market opportunity. And I think the key here is that we’re so confident in our ability to identify the right candidates and execute the refracturing work, that we’re prepared to take significant risks, in terms of how we go about doing this work.

“In many cases, if we can select the candidates, we are prepared to foot the entire bill for the refracturing work and then get paid back in production.”

Bernstein Senior Analyst Bob Brackett and his team did a top-down review of refracking results to date and they came away unconvinced. The most recent and detailed economic review of Eagle Ford and Bakken wells conducted by Baker Hughes Inc. indicate that the “refracking economics are mediocre.”

Brackett said refracking in general has been “marginally economic on average; it can destroy value for specific wells (and potentially offset wells); a few wells dominate the value creation; and it does not compete for capital against initial drilling (and likely infill drilling).”

Discussions of refracks to date, Brackett said, are “success-biased. Much of the literature is from service providers or E&P operators that achieved some success. In addition, much of the market talk around refracks is similarly skewed positive.”

“Refracks have been an on again/off again topic since the early days in the Barnett,” but for the first time, he said he’s intrigued by “the technology laid out by the large service providers and the publicly stated refrack results. That said, we do not think refracture stimulations will be a near-term game changer to the U.S. supply picture.”

The bottom line, “Leave the good wells alone,” Pursell said. E&Ps “don’t work over wells that are currently producing lots of oil. ‘If it ain’t broke, don’t fix it’ was coined in the oil patch and if it wasn’t it should have been…We do wonder if horizontal wells have a 40-year useful life…Are there really that many candidates? If so, what does that say about longer term well performance?”