A chilly start to the week for much of the United States, and lingering cool weather on the East Coast to end the week, led to robust gains for spot gas prices for the April 20-24 week. NGI’s Weekly Spot Gas National Avg. jumped 10.0 cents to $1.595. 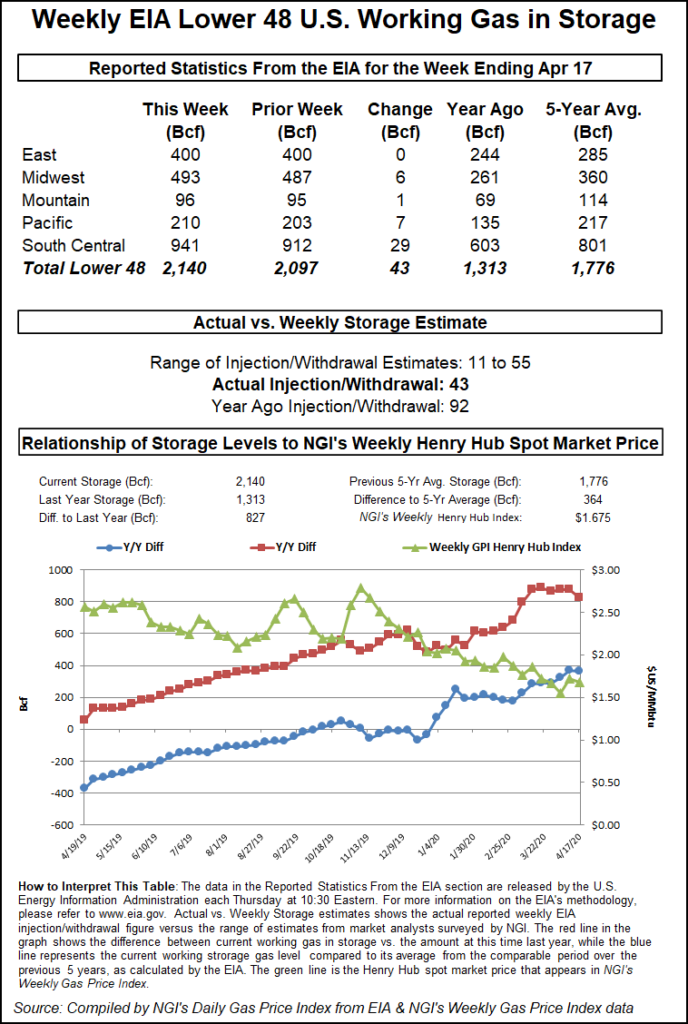 However, the biggest movers of the week ended in the red as pipeline maintenance in the Permian Basin led to some erratic moves early in the week. Waha spot gas plunged to a record low of minus $10.00 on Monday, ironically on the same that West Texas Intermediate crude oil prices also dropped into uncharted negative territory.

However, a look at the fundamentals showed that several pipelines in the region were undergoing repairs that limited outflows from the basin. Genscape Inc. analyst Joseph Bernardi said that El Paso Natural Gas’ deliveries to Kinder Morgan Texas Pipeline dropped off significantly, flipping from a prior month-to-date average delivery of 173 MMcf/d to a receipt of 43 MMcf/d, a 216 MMcf/d swing. El Paso’s deliveries to Gulf Coast Express also posted initial day/day declines of 100 MMcf/d, while Northern Natural Gas Pipeline’s net receipts from Oasis Pipeline ramped up by 105 MMcf/d.

In early cycle data for Wednesday, however, El Paso was back to making net deliveries to Kinder Morgan Texas, at 130 MMcf/d, and more typical flow patterns also were starting to be seen among the Northern Natural Gas, Oasis and Gulf Coast Express pipelines. Those changes were enough to make up most of Monday’s losses, sending the Waha weekly average to minus 28.0 cents, off 55.0 cents from the prior week.

In the Northeast, Transco Zone 6 NY gas shot up 23.5 cents week/week to average $1.745, with similar gains seen across the rest of the region.

With so much uncertainty surrounding the eventual economic recovery following the coronavirus pandemic, and the impact to gas supply in the wake of the historic oil market downturn, Nymex gas futures posted four straight days of 10-cent-plus moves during the April 20-24 week.

Friday initially was quite a bit calmer, but increased selling later in the session resulted in a still solid 6.9-cent decline for the May Nymex contract, which settled at $1.746. Friday’s close put the prompt month down 17.8 cents from the start of the week but still about 15 cents higher than the multi-decade lows seen the previous week.

On the demand side, power consumption is not showing the same large year/year gains that it had in the first quarter, but there is no “material” decline relative to last year on a weather-adjusted basis, according to the firm. Although industrial demand is not as visible on a weekly basis, that sector also appears to have avoided the “disastrous” projections made by some in early March, Mobius said.

Liquefied natural gas (LNG) exports also have held up relatively well, with the third production unit at the Cameron terminal starting to accept feed gas volumes. However, after a massive expansion the last two years, U.S. LNG’s trajectory over the coming months is all but clear.

With the Japan Korea Marker prompt month less than 50 cents above Henry Hub, and with Europe’s National Balancing Point trading under Henry Hub, the potential for cargoes to be stranded is “more tangible,” according to Mobius. Already, there have been reports of more than 20 cargoes being canceled for the summer, including two from the Freeport terminal in Texas.

From Mobius’ perspective, the risk of shut-ins is at its peak over the next 30-45 days, before the Northern Hemisphere begins to amass meaningful cooling degree days.

“Importantly, the European countries hardest hit by Covid-19 have not been the culprit for the majority of the storage overhang on the other side of the pond,” the firm said. “In addition to increasing cooling demand from population centers in Asia and Europe, the South American winter will begin and U.S. cargos will have an outlet to the south.”

While overall impacts to U.S. demand have been fairly moderate to date, the latest storage data showed an increasingly loose supply/demand balance. The Energy Information Administration (EIA) reported a 43 Bcf injection into storage inventories for the week ending April 17. Although the figure was below historical norms, it was an “interesting comparison” versus the week ending March 12, which was just before the impacts of the coronavirus began to impact demand, according to Genscape Inc.

“The current storage week was a bit colder than the week of March 12, yet we injected 53 Bcf more this week,” Genscape senior natural gas analyst Eric Fell said. The week ending March 12 actually posted a net 9 Bcf withdrawal, according to EIA.

While supply and exports make up a portion of the difference, the big story, according to Genscape, is that gas demand fell by around 40 Bcf.

Meanwhile, the supply side is not yet fully in focus, though exploration and production (E&P) companies continue to revise budgets and drilling activity following West Texas Intermediate crude’s freefall into negative territory.

“This quarter might be the first time during the shale revolution that E&P companies bend over backward to tell you how quickly they are getting wells offline, instead of the other way around,” said NGI Director of Strategy & Research Patrick Rau.

Indeed, rigs are dropping like flies. The latest Baker Hughes Co. (BKR) data shows the U.S. count dropped more than 60 units for the fourth week in a row, shedding 64 rigs to fall to 465. Losses for the week included 60 oil-directed units and four gas-directed. The U.S. count has fallen by 327 units since March 13 and now sits 526 units behind its year-ago total, BKR data show.

“There was considerable interest in Friday’s Baker Hughes weekly rigs report to see how much more of a week/week decline in oil and gas rigs it would show,” NatGasWeather. The declines in both oil and gas suggest declining Lower 48 associated natural gas production ahead.

“But when will it decrease enough to offset demand destruction from Covid-19?” the firm asked.

While forecasting the future price of gas comes with unprecedented challenges from the oil market downturn and coronavirus, pricing gas for the next three days proved a bit more manageable given the generally mild demand across the country.

Though some chilly weather remained in the outlook for the East Coast through the weekend, springtime temperatures were set to blanket much of the South and Texas. Hotter conditions were in store for the West Coast, but robust renewable energy continues to limit demand for natural gas.

SoCal Citygate prices for gas delivered through Monday plunged 34.0 cents to $1.505, while smaller losses were seen throughout the rest of the state.

In the Rockies, some pipeline maintenance in the region prompted sharp declines on Transwestern Pipeline and El Paso Natural Gas (EPNG), but the entire region ended the day in the red.

Permian Basin pricing also came under pressure from the Transwestern and EPNG maintenance, with extensive losses of more than 40 cents seen across the region. Waha prices plunged 48.5 cents to average 68.5 cents for gas delivery through Monday.

Other Texas markets fell anywhere from a nickel to as much as 25.0 cents.