Leftist AndrÃ©s Manuel LÃ³pez Obrador on Saturday was sworn in as Mexico’s president and in a fiery inaugural speech called for a “transformation” of the country to end impunity and fight corruption in the interest of the poor. 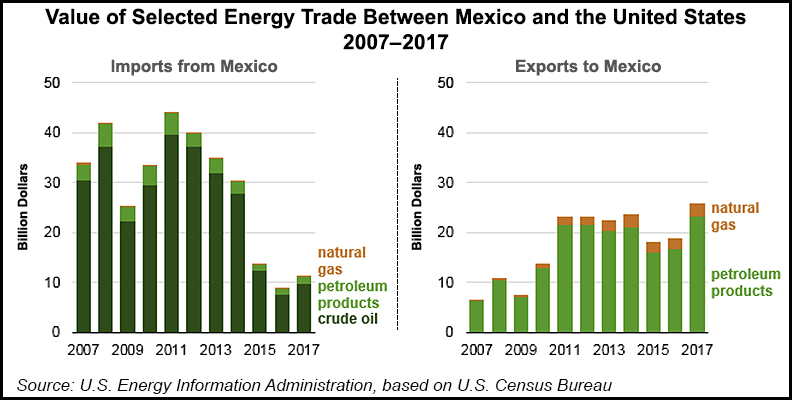 LÃ³pez Obrador began his speech by offering thanks to outgoing president Enrique PeÃ±a Nieto for avoiding any of the meddling in the electoral process that he claimed blocked his first two runs at the presidency, when he was narrowly defeated by conservative candidates in both races.

LÃ³pez Obrador, who won 53% of the vote earlier this year and whose party has a majority in both houses of Congress, was particularly critical of the energy reform in his speech, which was completed in 2013 and opened up the country to private sector participation for the first time in eight decades.

David Shields, editor and publisher of the magazine Energia a Debate, said the new president has yet to form a plan to bring about the change in the energy sector he seeks. “LÃ³pez Obrador wants to increase the production of hydrocarbons and build a refinery. But that’s not a plan,” Shields told NGI’s Mexico GPI.

During his speech to the Congress, LÃ³pez Obrador berated PeÃ±a Nieto’s energy policy as a prime example of the disasters he says have beset the “neoliberal” economy.
“They told us the energy reform was going to be our savior but it has meant a fall in production of crude and huge increases in the prices of gasoline, gas and electricity,” he said. “They told us we were going to be producing 3 million b/d of crude, and the reality is that it stands at 1.763 million b/d, exactly 41% less.”

That may, at least in part, be true, Shields said. “But the reform is the only legal framework for the industry that exists.”

After his speech, LÃ³pez Obrador gave another, this time in the main square, the Zocalo of Mexico City, to tens of thousands of supporters. There, as he has said earlier — though in less formal circumstances — he promised that hydraulic fracturing (fracking) would not be used to develop the nation’s shale and other unconventional resources.

“He may have said that more than a few times. But when he went to the state of Tamaulipas, where shale abounds and public opinion is in favor of fracking, he said that the so-called ban was merely a recommendation,” Shields added.

The same is true, he said, with respect to a prohibition on more upstream rounds before 2021 until the existing contracts are finally scrutinized. “If they do really need more production, especially toward the end of the administration, the only way to achieve it could be using the legal framework of the reform.”

LÃ³pez Obrador and his Energy secretary Rocio Nahle have told Mexican and foreign investors that new rounds would be called before 2021, so long as the companies prove that they can boost production.

State company PetrÃ³leos Mexicanos (Pemex) can also increase production, said Luis Miguel Labardini, a partner of the Mexico City-based consultancy, Marcos y Asociados, by harvesting relatively low-hanging fruit in shallow waters. “The problem there, however, is that the costs of production could easily exceed its market value.”

LÃ³pez Obrador, in his weekend speeches, recalled what for him were the golden years of Mexico’s economy from the 1930s to the 1970s. “The government,” he told Congress, “didn’t dare to privatize communal land, forests, beaches, railroads, telecommunications, mines, the electricity industry and much less give away the oil.

“But in the last three decades…the authorities have given rights to communal land and transferred State-owned companies, and surrendered some of the State’s functions to private national and foreign interests.”