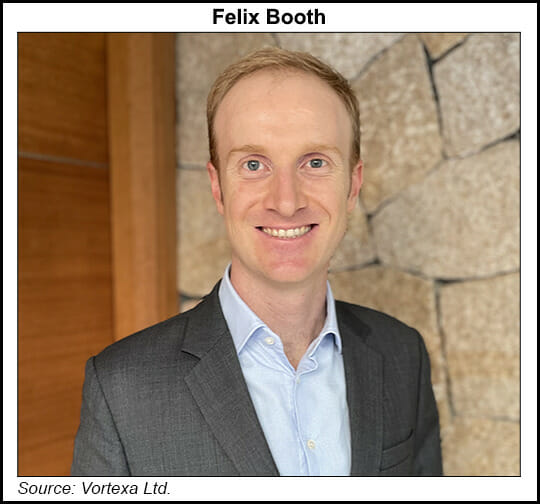 Based in Singapore, Booth recently joined energy analytics firm Vortexa, which is aiming to cast a wider net in the evolving LNG business.

NGI: Given the relative weakness of the LNG market in recent years, have you been at all surprised at how quickly the market has tightened in 2021?

Booth: After over a year of lockdowns, border closures, working from home and all the other unexpected consequences of living through a global pandemic, my threshold for being surprised has been somewhat reset. So, it’s fair to say I had an open mind for the 2021 market. That said, from analyzing our real time data, there were early indications of the LNG spot market building considerable strength in 2021. This was to be expected as economies rebound from the pandemic. We also expected to see a return to double-digit demand growth in Asia that would easily address the remaining supply overhang.

What has also become evident is how extreme the weather has been this year, with both an unusually cold winter and scorching summer across the Northern Hemisphere. It was quite incredible to watch this play out in real time on Vortexa’s analytics platform, leading to the huge spike in Asian LNG prices in February. Countries struggled to avoid electricity brownouts and buyers battled to source prompt cargoes in time to respond to the freezing conditions. This, in combination with a tight gas market in Europe, has continued to put pressure on LNG prices well into the pre-winter months, as storage levels remain low in the largest gas markets.

It’s great to see that we have now recovered from the Covid-induced multi-year lows of 2020, and we are now seeing a market with a lot of momentum behind it.

NGI: What has factored into some of the record natural gas and LNG prices in Europe and Asia this year?

Booth: Vortexa can point to critical data, which demonstrate the influence of European gas markets in recent LNG events. For example, as historic production from the North Sea and Netherlands has declined, LNG has found a notable role in balancing these large gas markets.

In 2021, Russian natural gas supplies have been restricted by booked transit capacity, and both a sharp rise in carbon and coal pricing has made gas more attractive to industry. This incremental demand has largely been filled by LNG and placed increased competition on cargoes in the Atlantic Basin and holding cargoes from the Russian Arctic in Europe, well into the second quarter.

Spot thermal coal prices in Asia also warrant attention as they made strong gains in unison with LNG prices. This has helped support the LNG market, as gas-to-coal switching economics are favorable. Much of this incremental coal demand is coming from China, as many experts are suggesting they are structurally short this year while domestic demand for energy is strong.

So, will natural gas and LNG hit records again this winter? Personally, given the above, I don’t think this is a likely outcome over the coming years.

NGI: Despite that, do you expect the global market to remain tight this winter and in the years to come?

Booth: Until there is positive news on the coming winter, I expect the market to maintain its strength. There is limited new LNG capacity coming online, which leaves buyers with few mitigation options. As a result, we are seeing many buyers focus on better preparation for this period and key players are preemptively securing additional supply to manage exposure to potential price spikes, like those seen in February.

Beyond 2021, the conditions point to continued growth in LNG demand, driven by coal-to-gas switching policies in China. We can also expect 2022 to bring positive news from the supply side, with three significant LNG projects due to start up and Nord Stream 2 set to increase Russian gas supply to Europe, easing their needs for LNG in the Atlantic. The magnitude of the supply increases will rebalance the market and provide more comfort for buyers.

NGI: As you’ve noted, demand in Asia has proved particularly strong this year. Can you talk more about how China has factored into the region’s demand? And is the nation likely to be a driving force for LNG suppliers in the years to come?

Booth: Like many other commodity markets, China has a significant position and this year reached the status of the top global LNG importer.

The government’s policy decisions have had considerable impact on the market, such as their coal-to-gas switching policy, which continues to drive coal out of increasingly deeper sections of their energy mix. To give you perspective, according to Vortexa’s data, China’s LNG imports during the first half of 2021 grew 15% compared to last year. There are no indicators that this will slow in the near future.

NGI: Asian demand continues to drive U.S. LNG supply additions. Do you expect more supply deals like those signed by Tellurian Inc. to be linked to Japan-Korea Marker (JKM) prices?

Booth: The pace of U.S. LNG expansion projects has slowed down in recent years, particularly as oil prices have fallen and Henry Hub-linked price mechanisms became less attractive. It is a true credit to those U.S. projects that have adapted their commercial models to entice a broader pool of buyers, beyond the traditional end-users in Asia.

Tellurian’s deals with Vitol Inc., Gunvor Group Ltd. and Royal Dutch Shell plc that are indexed to the Title Transfer Facility and JKM are well suited to these trading houses and integrated LNG portfolio players. I have been watching with interest as the JKM indexation and the shorter 10-year term in these contracts are likely to add complexity to financing for Tellurian’s Driftwood LNG project. Financing has been essential for many of the U.S. LNG developers to date and lenders have been slow to adopt alternative pricing mechanisms.

I don’t expect to see many Asian end-users sign up to these terms, as it introduces additional exposure for them to manage and prices linked to Brent or Henry Hub will continue to be the industry standard for some time.

NGI: Do you expect efforts to accelerate the energy transition in Asia to play a role in curbing the region’s LNG consumption in the coming years, or is it more likely that the fuel will continue to play an outsized role in displacing dirtier fuels such as coal?

Booth: This is one of the most interesting debates facing the industry today. We’ve seen targets set in Japan that accelerate their decarbonization ambitions, which will come at the expense of LNG’s share of the power sector by the end of the decade. Based on the proposal, in nine years we will see Japan, one of the largest LNG importers, halve LNG imports for power — with little to no differentiation by carbon intensity for gas versus coal in the plan. That’s quite a statement, getting the attention of those advocating for LNG as a key transition fuel for other nations choosing their path.

How each nation approaches the energy transition is a unique proposition, with many countries with significant growth in their power sector continuing to position LNG at the center of their energy mix. However, Vortexa’s data offers a view of the market landscape and provides insight into the growth potential in Asia. The region’s growth potential alone could more than offset reduction from countries reducing LNG demand to meet net-zero emission targets — leaving me with a positive outlook for overall LNG demand for years to come.

To secure a key role as part of the longer-term energy solution, the LNG industry needs to make progress on managing project emissions. The  ability to offset or sequester emissions will also increasingly determine which projects get the green light.

NGI: Vortexa has noted that the LNG market is “underserved by innovation.” Could you elaborate on that?

Booth: When compared to crude and refined products, the LNG market has been slower to develop a deep spot market. In recent years, traded volumes have grown considerably. Although, innovative approaches to real-time LNG analytics have been limited and haven’t kept pace with the rate of change in advanced technologies.

Vortexa has successfully brought such innovation to oil and refined products. There is a lot to leverage from this experience, which will close key information gaps in the LNG industry. I look forward to taking Vortexa’s coverage of LNG flows, cargo movements and freight to the next level, ultimately matching this high-quality data set with advanced analytical capabilities. We are confident that there is an immense opportunity in this space that will have tangible value for the industry.

Booth previously worked at ExxonMobil, where he held several senior positions across three continents, including Team Lead for Global LNG Analytics. He also worked on the commercializing LNG and natural gas assets for the company.

Cooler weekend weather model trends, dialing back expectations for early June heat, saw natural gas futures slide in early trading Monday. The June Nymex contract was down 10.9 cents to $7.974/MMBtu at around 8:45 a.m. ET. July was off 11.4 cents to $8.064. The early June temperature outlook trended cooler over the weekend in the…