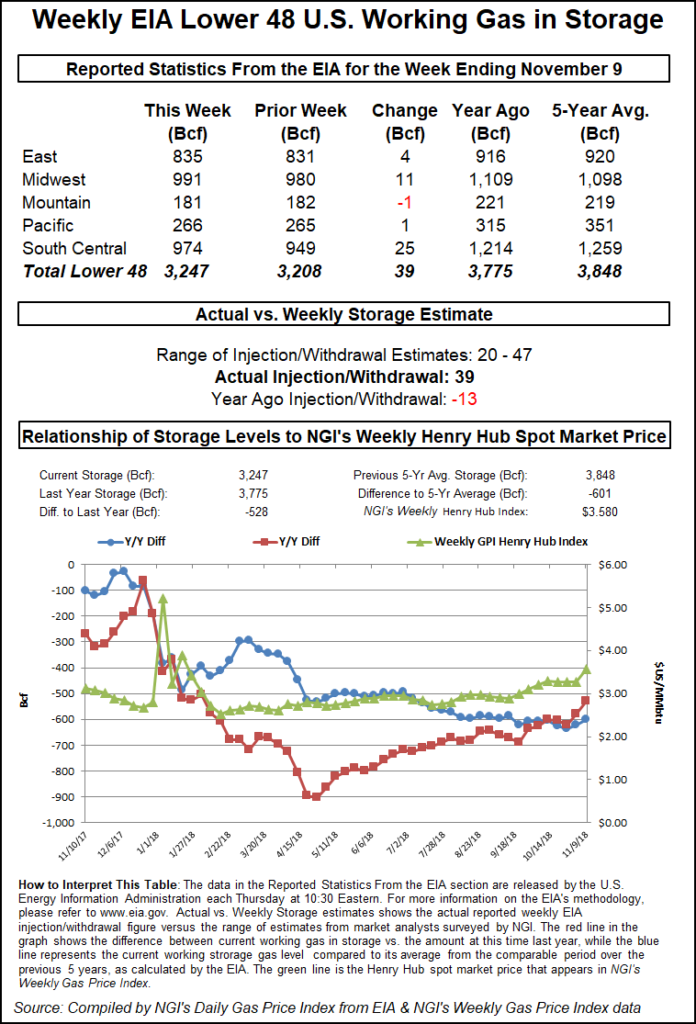 Weekly spot prices at benchmark Henry Hub added 71.0 cents to $4.290, setting the stage for widespread gains throughout the North American market as the wintry weather had bulls out in force.

In the Northeast, the typically volatile New England points posted winter premiums for the week, as Algonquin Citygate surged $3.400 to average $7.105.

Meanwhile, constrained West Texas saw big increases across the board coinciding with reports of a natural gas liquids pipeline outage that reduced gas supply coming out of the Permian Basin to start the week. Waha climbed $1.860 to average $3.195.

In the Rockies, Northwest Sumas traded as high as $100 as ongoing flow restrictions on Enbridge Inc.’s Westcoast system continued to drive elevated pricing in the Pacific Northwest. Northwest Sumas averaged $24.650 for the week, an increase of $14.460.

Meanwhile, SoCal Citygate, another location prone to constraint-driven price spikes, jumped $5.010 to average $10.130 for the week amid reports of maintenance expected to further restrict flows in the Southern California region.

Natural gas futures rallied Friday to close out a wild week that saw the prompt month briefly flirt with $5.000. The December Nymex futures contract climbed 23.4 cents to settle at $4.272 after trading as high as $4.372 and as low as $3.907 on the day. Week/week the prompt month gained 55.3 cents after settling at $3.719 the previous Friday.

It was one of the most volatile weeks in years for natural gas. Prompt month annualized 20-day historical volatility reached 100.5% on Thursday, the first time it exceeded triple digits since the polar vortex of 2014, an NGI analysis shows.

“Things have been moving so quickly, even intraday technical indicators are having a hard time keeping up,” NGI’s Patrick Rau, director of Strategy and Research, said Friday. “One trader I spoke to earlier this week said it’s just gut feel at this point.

“Volatility like this causes more than just energy traders to come out of the woodwork. I spoke to one major investment bank whose inflation forecasting team was caught completely off guard, since price volatility has been relatively tame for so long. There are lots of questions abounding among generalists and economists about just how sustainable the rally is, and whether this is a true shift in the fundamentals.

“Based on the futures strip, they needn’t worry. The gains of the last few days have been completely contained within the 2018-2019 winter months.”

“There were a few periods of more significant selling off quite warm American model guidance before colder European guidance helped prices spike into and after the settle,” Bespoke said. “If there is one high confidence statement at this stage it is that a significant gap can be expected Sunday, either one way or the other.”

As of Friday the firm was favoring a slight gap higher based on cold risks in the European model that could potentially drive prices back up to $4.50 if sustained over the weekend.

The 39 Bcf build for the week ended Nov. 9 compares to a 13 Bcf withdrawal recorded a year ago, while the five-year average is a 19 Bcf injection.

Prior to Thursday’s report, major surveys had pointed to a build in the mid- to low-30s Bcf, with estimates ranging from 28 Bcf to 42 Bcf. Intercontinental Exchange EIA financial weekly index futures had settled Wednesday at a build of 36 Bcf.

By region, the South Central injected 25 Bcf for the week, including 19 Bcf into salt and 6 Bcf into nonsalt. The Midwest saw an 11 Bcf injection, while 4 Bcf was refilled in the East for the week. The Pacific posted a 1 Bcf net build, while Mountain region saw a net withdrawal of 1 Bcf, according to EIA.

“Compared to degree days and normal seasonality, the 39 Bcf injection is about 4.1 Bcf/d loose versus the five-year average,” Genscape Inc. analyst Margaret Jones said. “…While the year/year deficit is still more than 528 Bcf, it has narrowed to its closest point since February.”

Analysts with Tudor, Pickering, Holt & Co. (TPH) viewed the market as about 2.5 Bcf/d oversupplied on a weather-adjusted basis for the latest EIA report week.

Last week, analysts with Morgan Stanley also updated their outlook for end-March inventories based on recent forecast trends to around 1.36 Tcf. Weather fluctuations within one standard deviation above or below 30-year normal gas-weighted heating degree day totals could see end-March inventories as low as 885 Bcf or as high as 2 Tcf, according to the analysts.

In the spot market Friday, a number of Northeast points gained on a wintry forecast as most regions sold off heading into the weekend; the NGISpot Gas National Avg. fell 67.0 to $4.350/MMBtu.

Snow from a nor’easter that was making its way north into the Canadian maritimes Friday was expected to end by early Saturday, according to the National Weather Service (NWS). But another front was expected to push across the upper and lower Great Lakes Friday and into Saturday.

“This will bring additional snowfall to the Great Lakes along with the New England interior — and will continue into Sunday,” NWS said.

“An Arctic high will slide into the northern tier states through the short-term period,” NWS said Friday. “A cold front will make its way from the central Plains to the middle Mississippi Valley — ending up in the Mid-Atlantic by Sunday evening. With these ingredients along with forcing an upper level disturbance, a swath of snow from northeast South Dakota to western Michigan is expected. The heaviest snowfall is expected in southern Minnesota, northeast Iowa and southern Wisconsin. Most of this activity will occur on Saturday — ending by Saturday evening.”

In the Midwest and Midcontinent, Chicago Citygate dropped 23.0 cents to average $4.240, while Northern Natural Demarcation eased 17.5 cents to $4.215.

In West Texas, a number of locations dropped $1 or more, retreating to levels observed prior to a natural gas liquids (NGL) pipeline outage that disrupted Permian Basin production and caused prices in the region to spike last Monday. Last week El Paso Natural Gas notified shippers that it was lifting a strained operating condition for several locations that had underperformed following the NGL pipeline disruption.

Deals for weekend and Monday delivery at Waha were marked down $1.185 on average to $1.900. Earlier last week, Waha had averaged as high as $3.850 as the reported dip in Permian Basin output appeared to temporarily ease the wide negative basis differentials that have dogged the takeaway-constrained region.

On Friday, SoCalGas was forecasting weighted average temperatures in the low 60s on its system over the weekend, with demand expected to total around 2.2-2.3 Bcf/d. With the import-constrained utility expecting system receipts to be capped at around 1.9 Bcf/d, the utility was projecting net storage withdrawals of about 375,000-475,000 Dth/d over the weekend.