The U.S. natural gas markets are going to see big swings for at least the next year and a half, with production volumes exiting this year at about the same rate as when the year began, according to an IHS Markit expert. 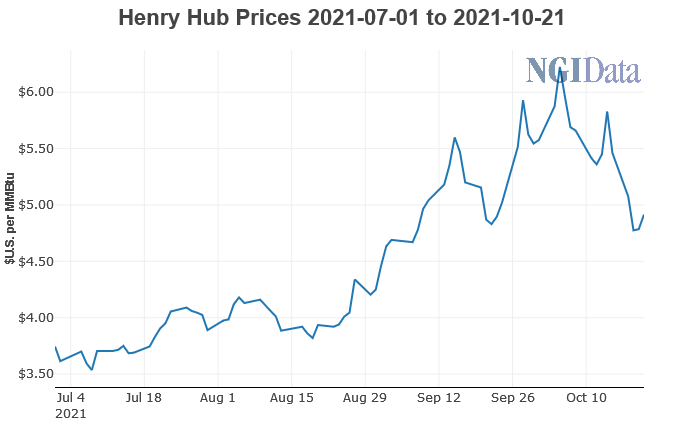 IHS Markit’s Jack Weixel, senior director of the Gas, Power and Energy Futures practice, offered his take about the swings in the global market, as well as the outlook for U.S. pipeline infrastructure growth, at the recent LDC Natural Gas Forums conference in New Orleans.

“I think that volatility is here to stay for a minimum of 18 months,” he told the audience. Domestic gas production this year has been “stagnant…We’re going to basically exit 2021 at the same volumes that we entered it…It takes producers some time to ramp,” and activity has remained sluggish.

“You really need to have stability of supply — and growing supply — to meet this growing demand,” Weixel said. “It’s one of the very unique things about this market.”

The price volatility going forward “may not all be weatherization issues” like the shocking Winter Storm Uri last February “because I think that’s being resolved in a lot of places. But certainly, where there are fuel shortages, you will see price spikes.”

Where Is U.S. LNG Growth Expected?

Lower 48 liquefied natural gas (LNG) facility expansions are set to continue on the Gulf Coast to help supply thirsty overseas markets. IHS Markit, mirroring other analyst forecasts, predicts the Calcasieu Pass LNG facility in Louisiana will be online by year’s end. The TransCameron pipeline that feeds the project was cleared by federal regulators earlier this year to enter service.

“We’re actually already seeing flows to Calcasieu Pass,” Weixel said. “We can see the justification for more buildout, certainly, to these Gulf Coast facilities as global demand increases…at least through the end of 2024.”

A massive amount of gas is still to be unearthed in the Lower 48. Moving it to end users, though, is no longer a sure thing.

“It’s becoming increasingly more challenging to build pipelines in this country in general,” Weixel said. “There’s a new kind of political reality…Things are changing.” Meanwhile, gas pipeline projects proposed or underway in the Lower 48 are dwindling.

Projects led by exploration and production (E&P) companies have dried up, in parallel with their cutbacks in capital expenditures and new development.

“There wasn’t going to be as much coming out of the ground, so they didn’t invest as much transportation to get it to different places,” Weixel said of the E&Ps. “But I think you also have to recognize that there’s more sophisticated activist engagement” by investors keen to enact environmental, social and governance initiatives.

“You also have to recognize the cultural shift toward a ‘green’ movement…Those things are…important, and I think they’ll become more important as we go forward.”

To date this year, U.S. pipeline expansions still have exceeded 2020 levels and “are approaching 2019 levels.” By year’s end, around 11 Bcf/d net pipe expansions are expected, along with 1,500 new line miles.

The growth, though, isn’t nationwide.

“Capacity additions in Texas and Louisiana were 88% of all Lower 48 pipeline expansions and additions in 2020,” Weixel said. “In terms of line miles, 97%…that were built in the U.S. are in either Texas or Louisiana, and most of that was in Texas.”

The Permian Basin has been Ground Zero for much of the Texas and Louisiana pipeline growth, where “there’s an appealing political climate…There are regulatory bodies that don’t…interfere. You’re getting less friction from state government in general…”

In parallel, a “cancel culture” exists for expansions and greenfield pipe, mostly in the Northeast, home to the gassy Appalachian Basin.

“Since 2018, 30.4 Bcf/d of expansion or greenfield pipe has been canceled or put on hold,” Weixel said. “A large amount of that has been in the Northeast. PennEast Pipeline was the most recent casualty.”

“Many others have faced strong opposition from both activists and state government,” Weixel  said. Going forward, “you’re facing a rash of regulatory requirements and also litigation to basically start to break ground. It’s a sobering picture there…”

Regarding the Northeast, “our anticipation right now is that Mountain Valley Pipeline may not end up being fully constructed until 2024,” Weixel said. “Wth the hurdles that the pipeline has already faced and anticipated hurdles along the way, the 2022 in-service date may not be as realistic as originally thought…”

Without a new outlet for Marcellus and Utica shale gas, “it bumps production up against a pretty high ceiling there, especially as we get into 2024…It’s hard to build a major long-haul pipe in the Northeast for all the reasons that we’ve seen across all the headlines. I can anticipate that kind of being a sad but continued reality that a lot of our friends in the pipeline industry are going to be facing.”

By region, nearly 40% of the pipeline cancellations have been in the Northeast. South Central, which includes Texas and Louisiana, also has seen close to 32% of the proposals remain on the drawing board. Many of the South Central expansions were put on hold because of market forces versus state intervention, Weixel said.

Even with some projects on hold, construction is booming to move Permian gas to Gulf Coast markets. Weixel said the increase in capacity in line miles “were mainly driven by two factors, expanded border crossing capacity into Mexico and also liquefaction, which is very prevalent in Texas.”

The Permian, “at least through the next three years, has enough pipe to carry gas, primarily west to east” across Texas. “That includes the additions this year of Permian Highway and Whistler,” as associated gas production from oil wells rebounds.

“If we get back to…pre-Covid levels there, that associated gas can effectively be carried out through the end of 2023. But when we look at a 2025 timeframe, you’re going to need more pipeline capacity across the state there as well.”

The gassy Haynesville Shale also has “room to grow.” The region could expand “more rapidly” because many of the E&Ps working the play are sponsored by private equity firms, which do not have the “balance sheet restrictions” of public producers.

“We think that the Haynesville is a very healthy area with what we call a higher market-based production ceiling,” Weixel said. IHS Markit assumptions show growth to be “nice and healthy,” and “crawl back above 15-16 Bcf/d for the combined region there.”