A new report from Rhodium Group suggested that the United States may have to play catch-up to regain progress in the fight against climate change following a year of volatile natural gas prices that led to more reliance on less expensive coal increased greenhouse gas emissions in 2021. 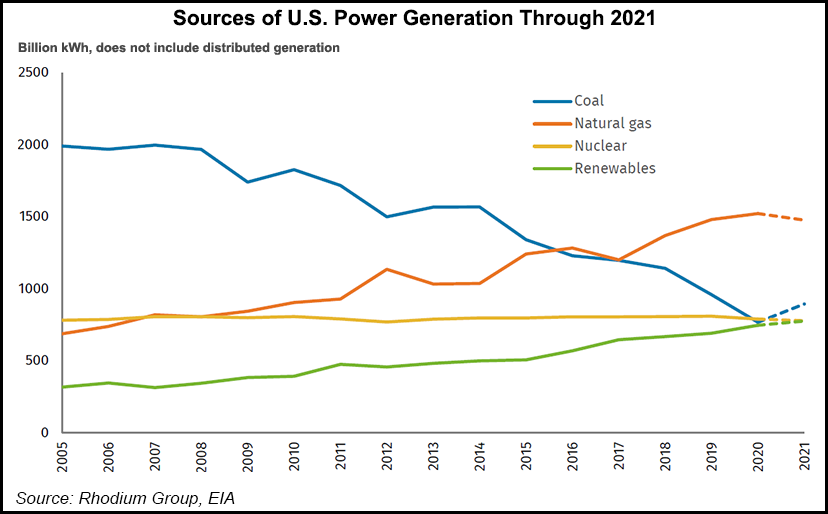 In its report published on Monday, researchers said U.S. carbon emissions climbed 6.2% last year compared to the 10.3% drop the country saw in 2020.

Rhodium Group is a private research firm based in New York and is a founding member of the Climate Impact Lab with Rutgers University, University of California, Berkeley and the University of Chicago.

While more vehicles were back on the roads last year, researchers attributed most of the nation’s increase to the electric power sector’s 6% jump in emissions over the previous year. There was only marginal growth in demand from 2020 levels.

Higher power sector emissions were attributed to greater use of coal, which was prompted by higher natural gas prices.

“High natural gas prices made gas-fired generation less economical in 2021, leading to a 3% decline in gas generation in 2021, dropping gas’ share of overall generation back down to 37%,” the report’s authors wrote.

Power producers burned 17% more coal in 2021 year/year, which researchers pinned partially on lower oil and gas production during the pandemic. Producers cut back sharply on spending as oil prices plummeted from lack of consumption.

Non-distributed generation in the U.S. from natural gas dropped around 100 billion kilowatt-hours (kWh) in 2021 compared to 2020, while coal-fired generation rose around 300 billion kWh during the same period, according to data from Rhodium.

Henry Hub wholesale spot prices averaged $3.89/MMBtu in 2021, more than doubling the average from the previous year, according to the Energy Information Administration (EIA).

According to EIA, U.S. coal inventories last September were at their lowest point since 1978. That limited the tools companies used to stave off more gas price increases in October. Consequently, greenhouse gas (GHG) emissions from expanded coal generation climbed. U.S. progress on climate goals slipped from 22.5% of 2005 GHG emissions to 17.4% in 2021.

The United Nations (UN) climate accord reached in late 2015 provided voluntary goals for participating countries to reduce GHG emissions by 50-52% below 2005 levels in 2005 by 2030.

Aging coal-fired plants since 2015 are being retired at a quick pace in the United States. Fewer retirements occurred in 2021 as capital was cut and projects interrupted by the pandemic.

On Tuesday, EIA reported 12.6 GW of coal-fired generation capacity would be retired this year, which is 6% of the capacity used in 2021. Natural gas generation is expected to increase by 9.6 GW during the same time frame. Almost all of the added generation is forecast to be from projects in  Florida, Illinois, Ohio and Michigan.

The EIA also reported Tuesday that natural gas prices should stabilize and decline into 2023 because of more renewable generation increases. Henry Hub is forecast to average $3.79/Mcf for 2022 and $3.63 for 2023.

EIA projected that solar generation capacity would lead the renewables growth this year, with Texas likely to add the most generation.