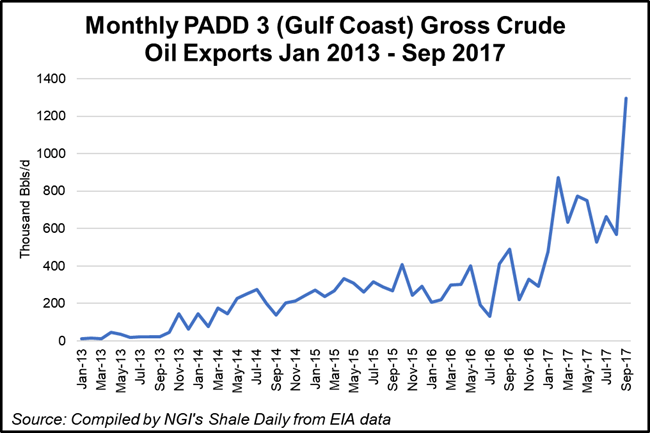 Vitol and Hilcorp’s Harvest Pipeline Co. plan to lease a 22-acre tract from the Port of Corpus Christi, which approved the lease earlier in December.

“Port Corpus Christi continues to help develop maritime facilities and provide services to customers that are committed to sustainable growth, and building the future of our community,” said Executive Director John LaRue. “We are looking forward to growing a longstanding relationship with Vitol and Harvest Pipeline Co. with mutual benefits for the future of our region.”

Crude oil shippers would have access to the terminal via a 16-inch diameter lateral pipeline. “The agreement between Harvest Pipeline Co. and Vitol is an extraordinary opportunity to help satisfy the growing need for export capacity along the Texas Gulf Coast,” said Harvest President Sean Kolassa.

Vitol’s Mark Couling, who heads crude oil for the marketing giant, said crude oil demand, “particularly in emerging markets, continues to grow, and U.S. shale has an important role to play in satisfying this demand. Our new pipeline and terminal will facilitate the efficient delivery of U.S. crude to global markets, thereby increasing marketing opportunities and optimizing value for U.S. producers.”

Vitol trades more than 7 million b/d of crude oil and products. At any time, it said it has as many as 250 ships transporting cargoes.

The new project aligns with the Port of Corpus Christi’s strategic plan goals, which include providing surface infrastructure and services in support of maritime and industrial development.

Port Corpus Christi is the fourth largest port in the United States in total tonnage. The 36-mile, 47-foot deep channel is becoming a more important gateway to international and domestic maritime commerce.

The Corpus Christi region, while not causing much heartburn for the Houston Ship Channel, is becoming a magnet for oil, liquefied natural gas (LNG) and petrochemical projects.

Among other things, Plains All American Pipeline LP and Anadarko Petroleum Corp. earlier in December said they are planning open seasons to move Permian crude to the Corpus Christi/Ingleside area.

In addition, Cheniere Energy Inc. is proceeding with the Corpus Christi LNG export project. And ExxonMobil Corp., and Saudi Arabian partner Saudi Basic Industries Corp., agreed to develop a world-class ethane steam cracker near Corpus Christi that would be able to produce 1.8 million metric tons/year of ethylene. Once completed, the cracker is expected to be the largest in the world.