Energy stakeholders endorsed President Biden’s strengthening of U.S. climate change commitments on Thursday, but they also stressed the importance of natural gas in achieving deep decarbonization of the economy. 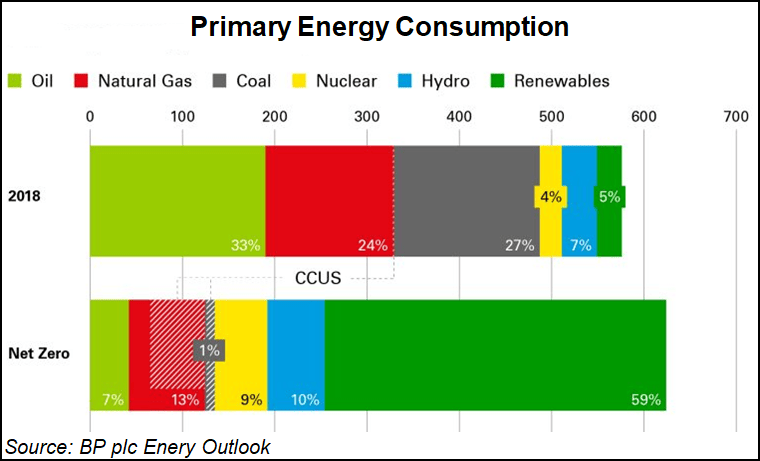 Biden said Thursday the United States will target a 50-52% reduction in economy-wide greenhouse gas (GHG) pollution by 2030 versus 2005 levels.

The announcement, made during the virtually held Leaders Summit on Climate, doubles a previous U.S. commitment of a 26-28% reduction under the 2015 United Nations (UN) Climate Agreement, aka the Paris Agreement.

Each country’s commitment, submitted to the UN Framework Convention on Climate Change, is known formally as the country’s nationally determined contribution or NDC.

“The United States is not waiting, the costs of delay are too great, and our nation is resolved to act now,” the White House said. “Climate change poses an existential threat, but responding to this threat offers an opportunity to support good-paying, union jobs, strengthen America’s working communities, protect public health, and advance environmental justice.”

Biden’s “Build Back Better” agenda aims for a carbon dioxide (CO2) emissions-free electric power sector by 2035 and a carbon-neutral economy by no later than 2050.

“Setting economy-wide goals to reduce GHG emissions is important to combating global climate change,” said Interstate Natural Gas Association of America (INGAA) CEO Amy Andryszak. “INGAA members are fully committed to being part of the climate solution and working as an industry toward reaching net-zero emissions from natural gas transmission and storage operations by no later than 2050.

“We adamantly believe that successful progress towards a clean energy future must include investments in natural gas infrastructure.”

Recent analysis by Wood Mackenzie found that natural gas demand is likely to stay resilient even in a scenario where the human-induced rise in global temperatures is held to 2 degrees C or less.

BP plc in its Energy Outlook 2020 estimated that even in a net-zero scenario, natural gas would still account for 13% of global primary energy demand, versus 24% in 2018.

Authors Erin Blanton, Melissa Lott and Kirsten Smith said, “Fortifying and upgrading the system could prepare the existing infrastructure to transport zero-carbon fuels as they become available and, in the meantime, reduce harmful methane leaks from natural gas.”

According to INGAA, “The U.S. gas transmission and storage network continues to enable GHG emissions reductions across the natural gas value chain while supporting the growth of renewable energy.

“The natural gas industry has a proven track record of reducing emissions and we will continue to collaborate with local policymakers, federal regulators, Congress and this administration to reduce greenhouse gas emissions,” Harbert said.

“U.S. LNG is already playing a vital role in helping growing economies around the world to reduce their emissions, improve their air quality and provide reliable energy to people who desperately need it,” said the Center for LNG’s Charlie Riedl, executive director. “Furthermore, U.S. LNG exports are supporting renewable deployment across the globe, even further reducing emissions.

“U.S. LNG is part of the next generation of sustainable energy solutions to reducing emissions.”

American Petroleum Institute CEO Mike Sommers said the oil and gas lobbying group supports the goal of the Paris Agreement, but the new NDC “addresses only half of the dual challenge of reducing the risks of climate change while ensuring affordable, reliable energy for all Americans.

“With a transparent price on carbon and innovation, we can make measurable climate progress within this decade without hurting America’s middle class, jeopardizing U.S. national security, and undermining economic recovery.”

API recently published its Climate Action Framework, which calls for policies such as an economy-wide price on GHG emissions and direct regulation of methane from new and existing oil and gas operations.

The American Chemistry Council (ACC) echoed API’s sentiments on Thursday. The ACC called for a three-pronged set of policy “imperatives” to dramatically reduce GHG emissions. They include developing and deploying clean manufacturing technologies, pricing carbon, and promoting the adoption of emissions-avoiding solutions and technologies throughout the economy to achieve significant emissions savings.

“There are multiple paths to reach these goals, and the U.S. federal, state, local, and tribal governments have many tools available to work with civil society and the private sector to mobilize investment to meet these goals while supporting a strong economy,” the White House said.

The targeted reduction is based on analysis that explored multiple pathways for each economic sector of the economy that produces CO2 and other types of GHG – namely electricity, transportation, buildings, industry and lands, the administration said.

In the transport sector, the administration is aiming to improve fuel efficiency in cars and trucks, accelerate deployment of electric vehicles, and advance “very low carbon new-generation renewable fuels for applications like aviation, and other cutting-edge transportation technologies across modes.

“Investment in a wider array of transportation infrastructure, including transit, rail, and biking improvements, will make more choices available to travelers.”

The industrial sector also is included in the plans.

“The United States can address carbon pollution…by supporting carbon capture as well as new sources of hydrogen — produced from renewable energy, nuclear energy, or waste — to power industrial facilities,” the Biden team said. “The government can use its procurement power to support early markets for these very low- and zero-carbon industrial goods.”

The White House added that it will target a reduction in non-CO2 GHG such as methane, hydrofluorocarbons and other short-lived climate pollutants. Methane is the main component of natural gas.

The administration touted the job-creating potential of its climate agenda, including for “workers capping abandoned [oil and gas] wells and…stopping methane leaks,” and for “construction workers expanding carbon capture and green hydrogen to forge cleaner steel and cement…”

Although Biden’s actions to reenter the Paris Agreement and enhance the U.S. NDC generated much fanfare, Congress has yet to pass legislation mandating a limit or a price on GHG emissions.

Sen. Ed Markey (D-Mass.) and Rep. Alexandria Ocasio-Cortez (D-NY) on Tuesday reintroduced their Green New Deal (GND) Resolution, which lays out similar ambitions to those proposed by Biden. The GND does not explicitly call for a price on emissions. The GND is generally viewed in energy circles as more hostile toward the fossil fuel industry than Biden’s platform. The Texas Independent Producers and Royalty Owners Association (TIPRO), which represents operators in the most active producing state in the country, said voluntary efforts are working.

“Once again, this nonbinding resolution, and variations of it, fail to address the massive spending, economic fallout and negative impact on both energy and national security that would result from such measures,” said TIPRO President Ed Longanecker on Thursday. “Supporters of the Green New Deal also continue to avoid acknowledging the successful efforts by the U.S. oil and natural gas industry in reducing emissions through voluntary actions, innovation, collaboration and the investment of literally hundreds of billions of dollars in greenhouse gas mitigating technologies throughout the oil and gas value chain.”

Biden, meanwhile, is asking Congress to approve his $2.25 trillion American Jobs Plan, which looks to overhaul the power grid, expand renewable energy and speed up deployment of electric vehicles.

Canada Prime Minister Justin Trudeau matched Biden on Thursday, announcing an emissions reduction target of 40-45% from 2005 levels by 2030, up from the previous target of 30%. Japan also followed suit, nearly doubling its commitment to a 46% reduction by 2030 versus a previous target of 26%.

China and the United States, the world’s two largest emitters, last week released a joint statement pledging to cooperate on strengthening the Paris Agreement and pursuing efforts to limit warming to 1.5 degrees C ahead of the UN Climate Change Conference slated for November in Glasgow, Scotland. China last year announced it was strengthening its NDC and aiming to achieve carbon neutrality by 2060.

India Prime Minister Narendra Modi, said Thursday the country is doing its part, citing its renewable energy target of 450 GW by 2030. He noted, however, that India’s per-capita carbon footprint is 60% lower than the global average. India’s NDC under the Paris Agreement aims for a 33-35% reduction below 2005 emissions intensity of gross domestic product by 2030.