Virginia will pursue offshore oil and natural gas drilling; support the improvement and expansion of intrastate and interstate gas pipelines; and expand its program of purchasing or converting state and local government vehicles to run on natural gas or propane, as part of an energy plan unveiled Tuesday by Gov. Terry McAuliffe. 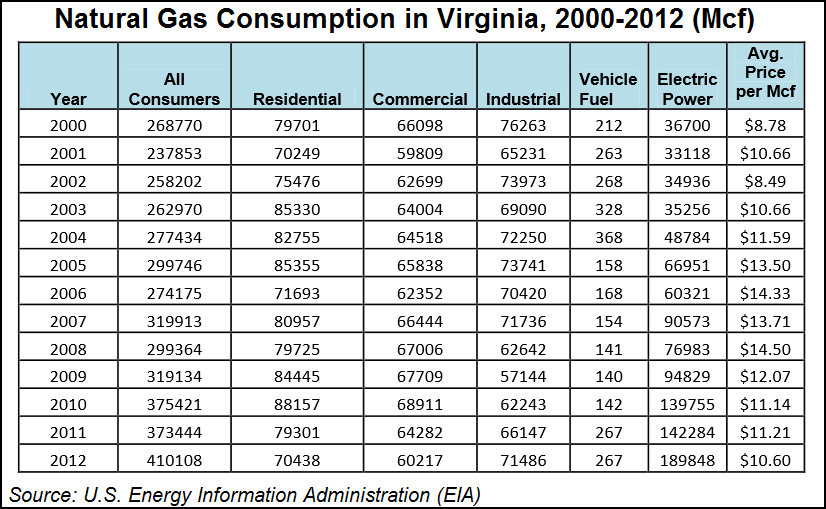 During a presentation co-sponsored by the Virginia Chamber of Commerce and the Virginia League of Conservation Voters, the Democratic governor said the energy plan, which is divided into 12 sections, is designed as an “all of the above” strategy targeting different forms of energy.

“If we are going to build the economy Virginia families deserve, we must begin by giving them the energy plan our economy demands,” McAuliffe said. “The plan we are rolling out today is focused on growing our energy economy — particularly in the renewable sector — emphasizing energy conservation, strengthening our energy infrastructure and training the workforce we need for the future.

“By working together, I am confident that four years from now we will live in a stronger commonwealth that is less dependent on external forces and is fueled by cleaner, cheaper and more abundant Virginia energy.”

The plan calls for the state to pursue development of its offshore oil and gas resources, specifically those located 50 miles or more off the coastline. To move development forward, the state will enter into a revenue sharing agreement with the federal government, and will advocate for the inclusion of Virginia’s portion of the Mid-Atlantic Planning Area in the U.S. Department of Interior’s 2017-2022 Five-Year Outer Continental Shelf (OCS) Oil and Gas Leasing Program (see Daily GPI, June 13).

The state Department of Mines, Minerals and Energy (DMME) will conduct a readiness study to determine Virginia’s ability to sustain an offshore oil and gas industry. The study will focus on issues including spill preparedness, and report its findings to the governor, the secretary of commerce and trade and the secretary of natural resources by April 15, 2015.

“Virginia should evaluate the adequacy of port infrastructure to ensure that the commonwealth is fully prepared and capable of supporting this industry, can provide a timely and comprehensive response to oil spills, and can address the concerns raised by fishing and tourism interest,” the plan said. The state will also address “concerns raised by the military about conflicting uses” in the offshore leasing areas.

On infrastructure, Virginia will support legislative and regulatory policies, including the use of special utility rates, to give the state’s natural gas utilities the opportunity to expand their intrastate pipelines into parts of the state that are either underserved or unserved for natural gas. The state will also support improvements and expansions to interstate lines, increasing capacity to places such as the Richmond area and Hampton Roads.

The plan also calls for the state to study the possibility of building a liquefied natural gas (LNG) pipeline, bunker and fueling station at or near the Port of Virginia, which is in Hampton Roads. According to the plan, such facilities would “allow the servicing of terrestrial LNG and CNG [compressed natural gas] vehicles as well as container ships that operate on LNG fuel. This facility would not be designed with specifications of sufficient scope to allow its use for export of LNG, only on-site fueling.”

Virginia will also expand the Commonwealth Alternative Fuel Program, which it launched in 2012, to purchase or convert vehicles to run on natural gas or propane. The plan’s goal is to advance the first 100 vehicles by Oct. 1, 2015, and to have at least 300 vehicles deployed by the time McAuliffe’s term expires on Jan. 13, 2018.

“Incentives for alternative fuels, zero-emission vehicles at this level is an effective tool used to increase deployment of these vehicles while allowing citizens to leverage and take benefit from the ongoing federal $7,500 incentive,” the plan said.

According to the U.S. Energy Information Administration, Virginia consumers used 392.3 Bcf of natural gas in 2012. An additional 17.8 Bcf was consumed in the operation of pipelines and in well, field and lease operations. Natural gas use in the state increased 56% over the last decade, and is projected to grow over the next 10 years.

The DMME reported that 21 oil and gas companies working in Virginia collectively produced 147.3 Bcf of natural gas in 2013, from 7,400 wells. In 2010, the largest producer was CNX Gas Co. LLC (86 Bcf), followed by EQT Production Co. (47 Bcf). Most of the state’s natural gas production comes from coalbed methane.