Virginia and energy holding company Duke Energy each committed themselves Tuesday to plans aimed at achieving net-zero carbon emissions by 2050. 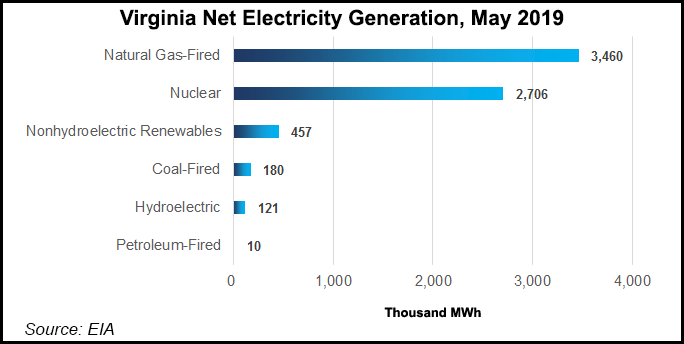 Those goals include having 30% of Virginia’s electric system powered by renewable energy resources by 2030 and 100% produced from carbon-free resources by 2050. In addition, Virginia will have at least 3,000 MW of solar and onshore wind power under development by 2022, and up to 2,500 MW of offshore wind will be fully developed on an accelerated timeline by 2026, according to the order.

“Since I took office, our administration has been focused on establishing a strong and bold vision for Virginia as we work to modernize our electric grid and reduce barriers to the development of clean energy resources,” Northam said. “We know the importance of a true shift to reliance on renewable energy sources in reducing our carbon footprint, growing our economy, and creating the clean energy jobs of the future.”

Earlier this month, Connecticut Gov. Ned Lamont signed an executive order strengthening that state’s efforts to combat the effects of climate change, including plans to achieve a 100% zero carbon target for the electric sector by 2040. Connecticut’s Department of Energy and Environmental Protection recently issued a request for proposals that would allow the state to procure up to 2,000 MW of offshore wind energy — about 30% of the state’s total load. California, which boasts the largest economy in the United States and the fifth largest in the world, has already committed to a carbon-neutral economy by 2050, along with several other states.

Also on Tuesday, Duke Energy said it too is aiming to achieve net-zero carbon emissions from electricity generation by 2050, with a shorter-term goal of reducing carbon emissions by at least half by 2030.

Charlotte, NC-based Duke Energy, which had previously targeted a 40% carbon reduction by 2030, said it has reduced carbon by 31% since 2005.

“A diverse mix of renewables, nuclear, natural gas, hydro and energy efficiency are all part of this vision, and we’ll take advantage of economical solutions to continue that progress,” said Duke Energy CEO Lynn Good. “In the longer-term, innovation and new technologies will be critical to a net-zero carbon future.”

While Duke Energy plans to at least double its portfolio of solar, wind and other renewables by 2025, natural gas will still play a central role in power generation.

Among other utilities, Xcel Energy Inc., has said it plans to reduce its carbon footprint by 80% within 11 years and achieve zero carbon electricity by 2050. To replace coal-fired plants scheduled to retire over the next decade, Xcel said it will add 4,000 MW of solar and 1,200 MW of wind, and will acquire one gas-fired plant and build a second combined-cycle plant. Public Service Enterprise Group Inc. recently announced similar targets as well.