Recent market tightness could herald “violent price upside” for U.S. natural gas this winter if temperatures are colder than average, according to analysts at Goldman Sachs Commodities Research. 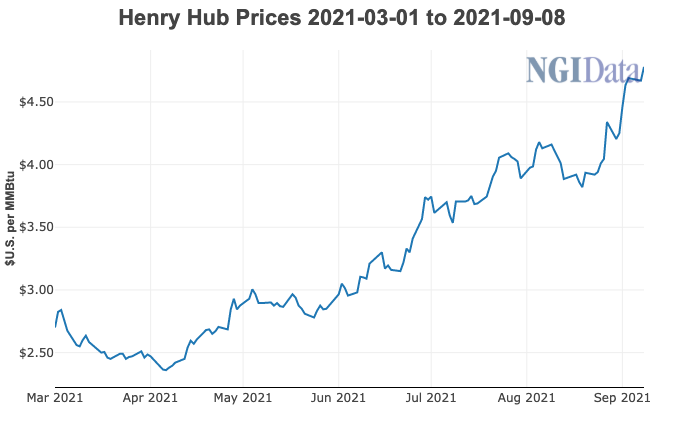 “The move was initially triggered by a large tight surprise in storage injections released by the EIA on Aug. 26, at the same time that hotter-than-average weather kept late-August burns at the highest levels for the month.”

Under an average winter weather scenario, the Goldman team believes the market can balance at $3.65, about $1.10 below current winter 2021-2022 forwards. Likewise, “a small colder deviation from average would likely be solved” through gas-to-coal (G2C) substitution against “Appalachia coal in a $5.00-6.50 gas price range,” the analysts said.

Winter temperatures that are one standard deviation colder than average though, could trigger a price rally above $10.00, with U.S. average gas demand increasing by more than 3 Bcf/d.

“This suggests that gas-to-Appalachia-coal substitution alone is likely insufficient to rebalance the U.S. gas market under a colder-than-average winter, in which case U.S. gas prices would continue to move higher, looking for further demand destruction,” the analysts said. “Such a price level could be well above $10, in order to reduce export margins from U.S. industrial users relative to users of global gas prices, currently priced at $17-20 for the winter.”

Shutting the U.S. arbitrage (arb) window to reduce liquefied natural gas (LNG) export demand “would require an initial $10 rally in Henry Hub prices to about $15, given current global gas prices,” the analysts said. However, unless Europe and Asia “experience a warm winter and do not require U.S. supplies, we would expect global gas prices to rally following Henry Hub in this scenario in order to keep the U.S. LNG export arb open.”

Therefore, “Given this risk asymmetry for winter natural gas prices and the potential for violent price upside under colder-than-average weather, we recommend that consumers protect themselves using far-out-of-the-money options to compensate for the sharp increase in implied volatility in recent months and weeks,” the Goldman team said.

U.S. storage injections in August were 89 Bcf tighter than what the Goldman team originally expected, “mainly driven by realized power burns that were even stronger than our above-consensus assumptions,” the analysts said.

The high power burns, in turn, were caused mainly by lower-than expected renewable generation, hotter-than expected weather especially in late August and limited G2C substitution, researchers said. They explained that while gas prices in August were high enough to leave nearly all Powder River Basin coal-fired power plants in the money to run, “peak-summer load was strong enough to require both coal and gas-fired plants to run,” limiting the amount of G2C substitution in recent weeks.