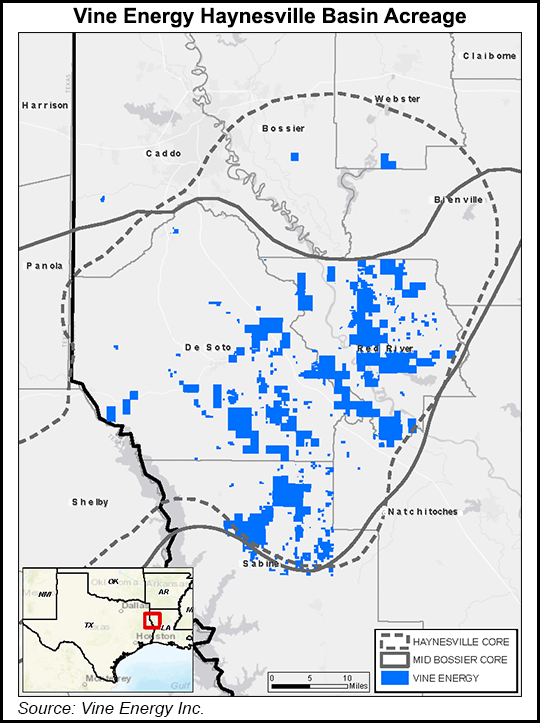 The Plano, TX-based independent in the spring of 2021 took the company public to secure more investor interest in its 227,000 net acre stronghold in the Haynesville and Mid-Bossier shales. Sponsor Blackstone Group LP remains the biggest shareholder.

During a conference call to discuss first quarter performance and the outlook, CEO Eric Marsh, who has led the company since it was formed seven years ago, said the company is looking to be a player in the race to move liquefied natural gas (LNG) overseas.

“Natural gas fundamentals are improving as expected, building a tailwind that will supplement the returns we currently realize from our exceptional well productivity,” Marsh said. “Last year, natural gas prices touched four-year lows amid a tariff war and a pandemic that crippled global energy demand, building a considerable backlog of natural gas supply in the U.S.

“Today, however, we are entering a far more sustainable environment supported by capital discipline and rapid growth in natural gas demand. The latter is unsurprising, bolstered by the long-anticipated surge in LNG exports.”

Vine’s holdings are in proximity to the Gulf Coast but supply also “stands out for a reason many may not appreciate,” he said. “We are witnessing the advent of the balanced-scorecard approach to sourcing LNG and environmental factors are prominent components. In an expected shift, the world LNG-consuming nations increasingly desire to source supply from low-emissions basins and low-emissions cargos.”

Vine since 2017 has sharply reduced its carbon dioxide equivalent emissions, Marsh noted. Methane intensity in the past four years has been cut by 62% to 0.014% of production. That matters to overseas markets, he noted.

“The evolution to clean LNG is quite remarkable…Given the leading environmental profile of Vine’s acreage and our environmentally sensitive practice, we are ready to step in to meet the world’s energy needs,” with “responsibly produced” gas.

Even with the move to become public over the past year, “our core identity hasn’t changed,” Marsh said. “We harbor the institutional knowledge and technology which allows us to drill some of the most economic natural gas wells in North America. We believe we can eclipse past milestones as we reach new drilling and completion efficiencies, drive down capital intensity and operating expenses and deliver on our expectations.

“Along the way, I believe improving natural gas fundamentals will hasten our bid to substantially increase the value of the company while holding production steady.”

Production improved year/year to 945 MMcf/d from 859 MMcf/d, even though Winter Storm Uri forced about 28 MMcf/d offline during February.

Including the derivatives loss, Vine fetched an average realized gas price of $2.34/Mcf, 5 cents lower year/year. Development and completion capital in 1Q2021 was $92 million to drill 6.2 net wells and complete 10.4. Another $6 million was spent to build out water gathering and midstream infrastructure.