Liquefied natural gas (LNG) vessels are already arriving at Equinor ASA’s Hammerfest LNG terminal in Norway in preparation for a mid-May restart after over a year of repairs, according to analysts. 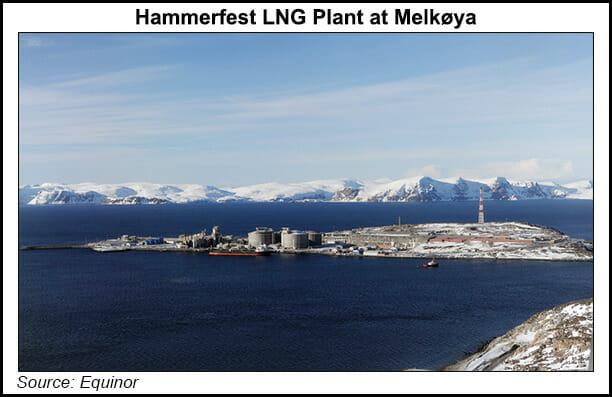 The Norwegian energy company recently confirmed the 4.3 million metric tons/year terminal was on track for start-up on May 17. The project, which chills gas from the Snohvit field in the Barents Sea, has been offline since a fire damaged the facility in September 2020.

Analysts from Kpler told NGI that two vessels were scheduled to arrive at Hammerfest prior to start-up. The 4.9 MMcf Arctic Voyager was expected to arrive on Monday and the 5.2 MMcf Arctic Lady could arrive by Friday.

Norway’s role as a supplier of natural gas to parts of Europe has renewed importance as Western allies seek to displace Russian gas imports following the invasion of Ukraine. Equinor’s Anders Opedal, CEO, said the start-up of Hammerfest was a part of the company’s mission of improving energy security, as well as optimizing “gas production to deliver higher volumes” to Europe.

The company reported its exploration and production operations increased volumes of oil and gas by 4% during the first three months of the year. That increase also included a 10% increase in gas sent to Europe.