Vermont Gas Systems announced Tuesday that it will not proceed with its proposal to build Phase 2 of its Addison Natural Gas Project (ANGP), which would extend service to portions of Addison and Rutland counties and an International Paper mill in Ticonderoga, VT, because of rising costs. 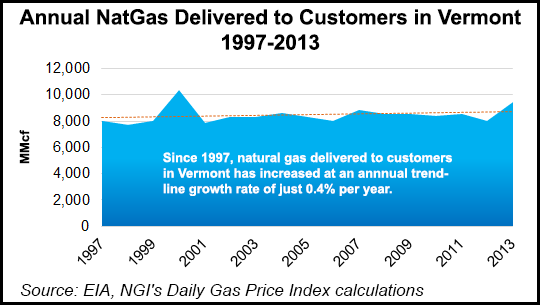 Following a review of Phase 2, Vermont Gas and International Paper “were unable to find a mutually acceptable path forward,” according to Jim Sinclair, Vermont Gas’ vice president for System Expansion.

“Our updated cost estimate for Phase 2 is now $105 million, compared to $74.4 million as presented to the PSB [Vermont Public Service Board] last August,” Sinclair said.

The cost estimate for Phase 1 of the project, which had initially been $86 million before being increased to $121.6 million, was recently increased again, this time to $154 million. International Paper’s’ total financial responsibility for both phases would have been $135 million, compared with an original estimate of $99 million, Vermont Gas said.

Vermont Gas applied to the PSB for approval of Phase 2 in late 2013 (see Daily GPI, Oct. 8, 2013). At the time, the company served more than 45,000 customers in Franklin and Chittenden counties, a number that has since reached nearly 50,000. Bringing natural gas to Addison County was expected to bring $200 million in energy savings over the next 20 years, while reducing emissions by 300,000 tons.

ANGP, which would add a 41-mile extension to Vermont Gas’ western Vermont natural gas system, had been endorsed by Gov. Peter Shumlin and a host of businesses and local officials (see Daily GPI, May 20, 2013). On Tuesday, Shumlin said Vermont Gas had made the right decision in shelving Phase 2.

“I’m glad that Vermont Gas Systems did what I asked and what the company committed to do — scrub the numbers and make sure the benefits of expansion continue to make sense for Vermont. In that process, it became clear that the costs and community challenges of the International Paper expansion have grown. Given the conclusions that the costs have exceeded International Paper’s threshold and the benefit to Vermonters from pursuing that project have decreased significantly, I support the companies’ decision to withdraw the project,” Shumlin said.

Also praising the decision was the Conservation Law Foundation, which has opposed the expansion plans.

“New gas pipelines [that] lock us into continued fossil fuel use for decades into the future are a bad bet for our climate and our pocketbooks,” the organization said. “It is encouraging that Vermont Gas recognized the serious problems with this project and pulled the plug.”

“We will now focus our efforts on completing Phase 1 of our expansion plan to serve Addison County as far south as Middlebury, and explore creative options for extending service to more Vermont communities, including Rutland,” Sinclair said.

Gas to be transported through the proposed pipeline originates in Western Canada.