Calgary-based Veresen Inc. is upping its game in the gassy Montney formation that straddles British Columbia and Alberta, announcing it is sanctioning C$195 million of midstream capital projects to serve an exploration joint venture of Encana Corp. and Mitsubishi Corp.

The Cutbank Ridge Partnership (CRP) of leading Montney producer Encana (60%) and production partner Mitsubishi (40%) would be served by the two Veresen Midstream projects to expand natural gas liquids (NGL) processing through the South Central Liquids and the Tower Liquids hubs. The South Central hub is expected to be in service by the end of June, while the Tower hub, slated for service during 3Q2017, was approved by the CRP in late 2015 to provide a “more commercially flexible solution” to handle and store NGLs produced at the Sunrise Gas Plant, Tower and Saturn Phase II processing facilities.

“With the sanction of this additional capital, Veresen now has over C$1.4 billion of projects under construction,” said CEO Don Althoff. “We expect these capital projects to deliver incremental per share growth as Veresen remains fully funded without the need to access capital markets.

“As Veresen Midstream’s capital projects come into service, the significant increase in cash flow will reduce Veresen’s leverage and bolster our financial flexibility to fund new growth opportunities generated from our strong footprint in the heart of the Montney play.”

Once completed, Tower is expected to be Veresen Midstream’s second-largest gas processing facility. The largest Veresen NGL facility, Sunrise, was sanctioned in 2015 and is to have up to 400 MMcf/d of capacity when it goes into service, now scheduled for late 2017. The CRP last year also proposed adding an incremental 200 MMcf/d of compression and 400 MMcf/d of refrigeration capacity to Veresen’s Saturn compressor site, which would convert it to a 400 MMcf/d gas plant.

Encana has big plans for the Montney, which management said could grow to 7 Bcf/d by 2020, representing 38% of the Western Canadian Sedimentary Basin’s production. The Calgary-based independent considers the formation to be one of the top natural gas plays in the world, and on par or even better than the Marcellus Shale.

The National Energy Board (NEB) of Canada in 2013 estimated the Montney’s expected recoverable resource was 450 Tcf of gas and 15.6 billion bbl of liquids. Output from the Montney, which has doubled since 2012, comprises about one-third of Western Canada’s natural gas production. By 2040, the NEB projects it could make up more than half of the country’s gas production.

Veresen is not alone in eyeing additional NGL capacity from the Montney.

TransCanada Corp. subsidiary Nova Gas Transmission Ltd. was approved in October to build the Towerbirch pipeline, an 87-kilometer (52-mile) stretch of 30- and 36-inch diameter pipeline near the Alaska Highway in the Dawson Creek and Fort St. John areas. The pipeline, which also would serve the CRP, is scheduled to go into service in late 2017. 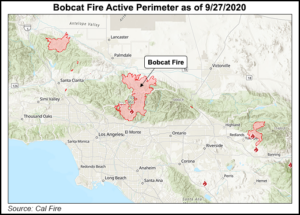 With more than two dozen wildfires now burning across the state, Southern California Edison Co. (SCE) said it has reached a $1 billion-plus settlement with insurance companies on the major fires involving its equipment in 2017 and 2018. The SCE settlement covers the 2017 Thomas and Koenigstein fires and 2018 mudslides in Montecito near Santa…