Mexico said it plans to tender its first strategic storage project at a depleted natural gas reservoir in Veracruz state. 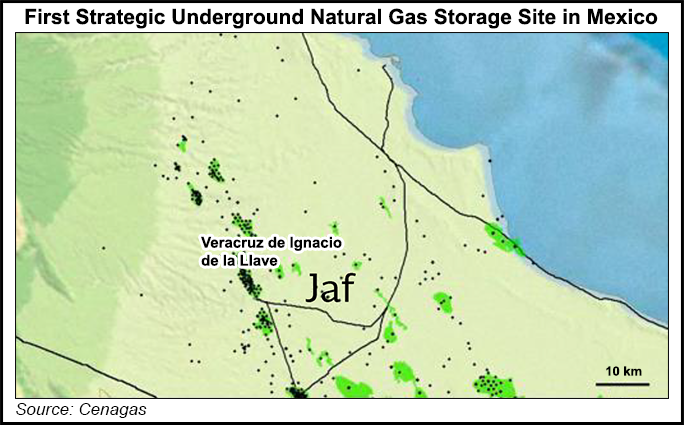 The Centro Nacional de Control del Gas Natural (Cenagas) this week published the preliminary bid documents for the tender, expected to launch later this year. The auction is to award a service contract to build and operate a 10 Bcf storage facility at Jaf, a depleted dry gas field in central Mexico.

Cenagas released drafts of the tender rules and the service contract model to solicit feedback from industry participants. The public consultation is scheduled to wrap up by Sept. 10, after which Cenagas may further revise the documents. Energy regulators must then approve the final bid documents.

The tender would launch only when the Energy Ministry (Sener) gives the nod of approval. Preliminary documents did not include a timeline for the tender.

The Jaf field had an original volume of 21 Bcf, according to a fact sheet published by Cenagas. The field was in operation from July 2009 to December 2014, producing a total of 11 Bcf.

Jaf is located on a block operated by state oil company Petroleos Mexicanos (Pemex), which drilled five wells in the field. Last year Mexican authorities determined that the field was no longer economically viable for exploitation as an oil and gas project.

The eventual developer of the storage site at Jaf would also be responsible for interconnecting the facility with the Sistrangas, Mexico’s main gas transmission system. The nearest pipelines on the system are 3.6 miles from the reservoir site, including a section of pipes that connects with the Cempoala compressor station.

Cenagas, the state-owned operator of the Sistrangas, is also tendering a project to reconfigure the Cempoala compressor to allow an expected influx of imported gas into central Mexico to flow farther south.

Mexico’s natural gas storage policy, published earlier this year, mandates that Cenagas develop 45 Bcf of strategic inventories on the Sistrangas. The Jaf tender is the first of these strategic projects, which would be reserved for supply emergencies. The full 45 Bcf must be in operation by 2026 at the latest.

Cenagas earlier this year proposed four depleted reservoirs for the first tender, including Jaf, along with the Brasil field in the northeast and two fields in the southeast. The operator selected Jaf after holding a nomination process to solicit input from industry participants.

Subsequent tenders for the strategic inventories may incorporate other types of underground storage technologies.

Also in Veracruz, Cenagas is evaluating a 2-3 Bcf salt dome storage project near Nanchital for operational balancing on the Sistrangas. The project is still in the preliminary planning stages and would be developed with Mexican industrial conglomerate Cydsa SAB de CV.

The draft contract for the Jaf storage project includes a 30% local content requirement. Apart from building and operating the facility, the project developer is also responsible for procuring cushion gas to ensure adequate pressure levels and withdrawal rates at the storage site. Remnant gas in the reservoir, to be determined when the contract is signed, may be used to develop the cushion.

Proposals for the storage site must also guarantee a minimum withdrawal rate of 500 MMcf/d that can be sustained over five consecutive days, according to the bid documents. Cenagas, in turn, would be responsible for procuring the working gas and delivering it for injection at Jaf, once the facility comes in-service.

Mexican authorities plan to closely regulate the strategic gas inventories held at Jaf and other facilities, restricting withdrawals to supply emergencies only. The cost of building and operating the 45 Bcf would be passed along through a tariff charged to all shippers on the Sistrangas and Mexico’s main private pipeline systems, authorities have said.

Cenagas would pay the winner of the Jaf tender a monthly fee covering the costs of financing, building and operating the storage site, plus an additional service charge. The monthly fee — capped at 75 million pesos/month, or $3.94 million/month at current exchange rates — is to be the principal economic variable in bids for the contract, according to the draft rules.

The Jaf facility must be built within in 3.5 years of contract signing, while the term of the service contract may extend for up to 30 years.

Energy sector officials expect the development of strategic inventories to pave the way for a commercial gas storage market to emerge in Mexico. Developers of Jaf and other strategic sites are permitted and encouraged to hold open seasons for commercial storage at the same facilities, officials have said.

In a survey of Mexican shippers last year, Cenagas detected commercial demand for storage capacity of 3.68 Bcf, or just under half of daily national gas consumption. The operator this year launched a second edition of the shippers survey and expects to publish the results in early September.