The pieces of the puzzle are falling into place for one of two liquefied natural gas (LNG) export facilities proposed by Venture Global LNG Inc. on the Louisiana coast after federal regulators on Tuesday approved full site preparation for the Calcasieu Pass project. 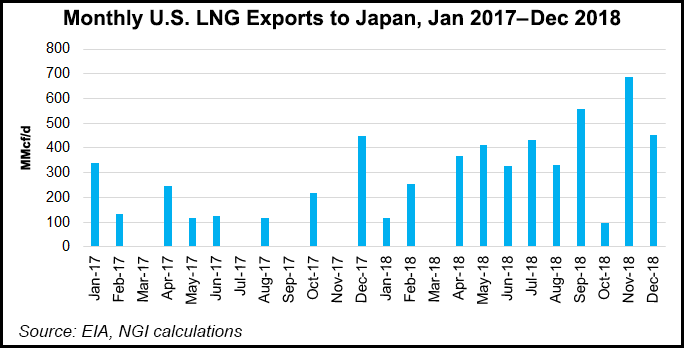 Sanctioning of Calcasieu Pass and the proposed Plaquemines LNG project are expected this year.

Last week, the Arlington, VA-based developer said it was doubling its global business because of customer demand and would increase capacity of the two facilities and other expansion projects to 60 million metric tons/year (mmty). At the same time, it increased the size of its 2016 process equipment supply agreement with Baker Hughes, a GE company (BHGE), to 60 mmty, under which BHGE is delivering “a comprehensive technology solution” for the facilities.

Meanwhile, the United States and Japan recently emphasized their commitment to strengthening energy security and promoting energy access in the Indo-Pacific region and in sub-Saharan Africa.

During the third meeting in February of the Japan-United States Strategic Energy Partnership (JUSEP) in Washington, DC, the countries “reaffirmed the importance of coordinating investments and priorities” in an effort to align the Japanese government’s target of $10 billion in public and private investment and capacity building training with the U.S. Asia Enhancing Development and Growth through Energy (EDGE).

They also confirmed the importance of working closely on LNG sector development and on fostering business-to-business connections. The meeting was held ahead of an Indonesia-U.S.-Japan LNG workshop in Jakarta, Indonesia, earlier this month that “highlighted opportunities for U.S. and Japanese firms to partner with Indonesia to further develop the LNG sector.”

But Spain’s Repsol SA and its partners last month claimed the largest natural gas discovery in Indonesia in 18 years, a find that could limit the need for imports in the future. Two LNG export projects are underway in nearby Mozambique, and Indonesia’s state-owned explorer Peratima agreed to support the Anadarko Petroleum Corp.-led Mozambique project by taking take 1 mmty for 20 years. ExxonMobil Corp. and Eni SpA already have sanctioned the Coral South LNG project in Mozambique.

In September, Sumitomo Corporation of Americas and Freeport LNG signed binding heads of agreement for a liquefaction tolling agreement for 2.2 mmty to start in 2023, to coincide with the start up of Train 4 at the export facility on Quintana Island. Japan’s Osaka Gas Co. Ltd. also has agreements in place to buy LNG from Freeport.