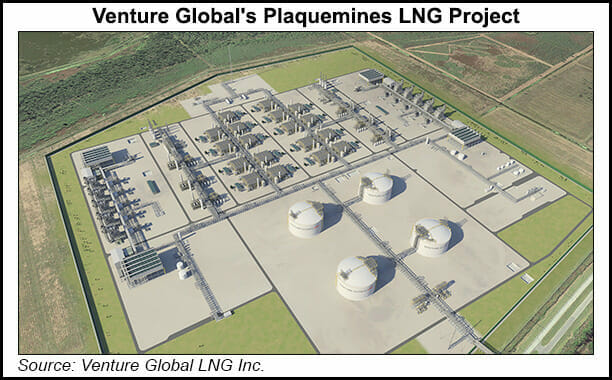 The Spanish-based energy major agreed to the deal in January. Repsol would take 18.25 Bcf of LNG over three years, according to a filing with the U.S. Department of Energy.

Initial construction activities started in earnest in September at the project site about 20 miles south of New Orleans after being briefly interrupted by Hurricane Ida.

At the beginning of February, Venture reported to the Federal Energy Regulatory Commission that construction was progressing. Crews were expected to begin pile testing in the future storage tank area and installing pre-production pads at the terminal site.

Once the entire scope of the project is completed Plaquemines LNG is expected to have a capacity of 20 million metric tons/year (mmty).

A final investment decision (FID) for the project is pending. An FID for the first nine blocks of the project, with a capacity of 11.3 mmty, was previously scheduled to be announced by the end of 2021.

Some long-term contracts have been secured, according to Venture. Last fall, it contracted 4 mmty with Polish Oil and Gas Co. It also announced a 20-year-deal with China’s state-owned China Petroleum & Chemical Corp., aka Sinopec, for 8 mmty, with half of the supply to come from Plaquemines LNG.

Venture is also developing two other facilities along the coast of Louisiana, and recently started loading operations at the 10 mmty Calcasieu Pass LNG. Plans are still underway for the 24 mmty CP2 LNG and the 20 mmty Delta LNG.