Liquefied natural gas (LNG) developer Venture Global LNG Inc. said Thursday it had finalized a deal that would make it the top U.S. supplier of the super-chilled fuel to Poland. 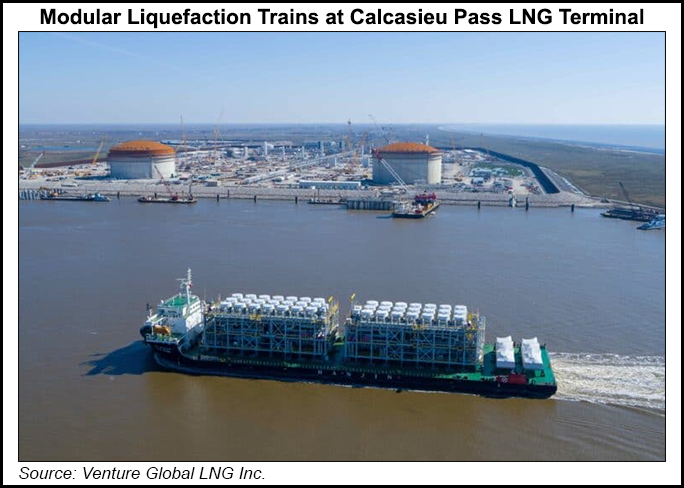 A sale and purchase agreement (SPA) signed Thursday in Warsaw calls for Polish Oil and Gas Co. (PGNiG) to buy 2 million metric tons/year (mmty) from Venture’s two Louisiana facilities for 20 years. That brings the total offtake under contract to PGNiG to 5.5 mmty over 20 years on a free-on-board basis.

“Poland will lower its carbon footprint and diversify its energy mix by incorporating more American natural gas into its portfolio,” Venture CEO Mike Sabel said. “Pivoting toward cleaner natural gas from the United States will not only increase Poland’s energy security but also decrease its carbon emissions.”

Including this most recent SPA, PGNiG is set to purchase 1.5 mmty from the Calcasieu Pass project, which is under construction and expected to come online by the end of the year. It also plans to purchase 4 mmty from the planned Plaquemines LNG, which is scheduled for sanctioning in 4Q2021.

In addition to Calcasieu Pass and Plaquemines, Venture Global is developing two other facilities in Louisiana: the 24 mmty CP2 LNG and the 20 mmty Delta LNG.

The PGNiG deal was first announced in July after news surfaced that the company had scrapped an offtake agreement with Sempra from its proposed Port Arthur LNG project in Texas. The pair are exploring ways to transition the deal to Sempra’s North American portfolio.

Poland has been working in recent years to cut its reliance on Russian natural gas supplies by expanding its relationships with additional pipeline suppliers and LNG exporters, particularly those in Norway, Qatar and the United States.

PGNiG’s Paweł Majewski, president of the management board, said the supplies would also allow the country to trade LNG on the global market.

“For this purpose we will charter LNG carriers to transport liquefied natural gas,” Majewski said.

The company recently signed an agreement with Knutsen OAS Shipping for the charter of two newbuild LNG carriers, which are to be delivered in 2024.

The announcement comes as customer interest is seen heating up amid a tightening LNG market. Tellurian Inc. recently secured enough offtake to support the first phase of its Driftwood LNG project in Louisiana. Meanwhile, Freeport LNG and Mexico Pacific Ltd. LLC have expressed optimism that customers would sign up for volumes in the near future.