It’s likely that more U.S. natural gas will be liquefied for export this winter as two projects in Louisiana continue to advance. 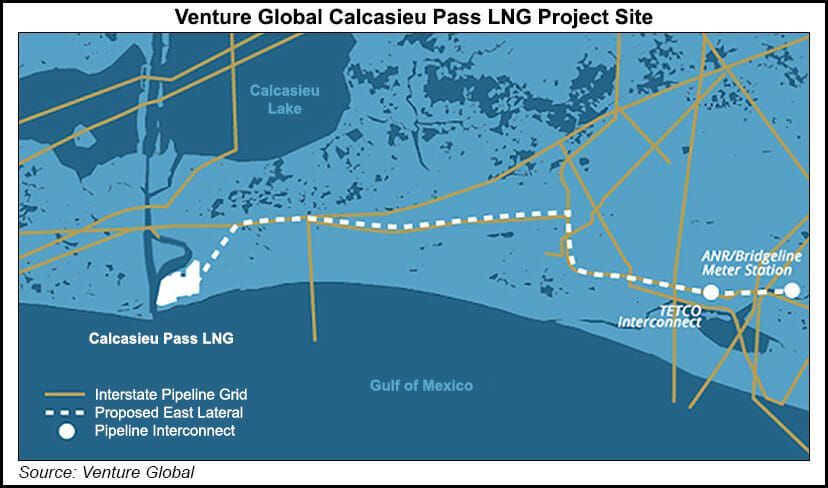 Both the Calcasieu Pass export terminal and a sixth train at the Sabine Pass facility recently signaled that they could be up and running by the end of the year. Venture Global LNG Inc. sent an implementation plan to the Federal Energy Regulatory Commission this month for the hot oil systems at Calcasieu Pass, which was also authorized to introduce feed gas to a gas turbine generator. Cheniere Energy Inc. was also recently granted approval to operate its hot oil system for the new train.

Wood Mackenzie said in a note to clients after the filings that it expects the sixth train at Sabin Pass  to be liquefying gas by December and fully operational in 1Q2022. The 5 million metric tons/year (mmty) train would expand capacity at Sabine Pass to 30 mmty.

Cheniere management said earlier this month the sixth train at Sabine Pass was 90% complete and expected to enter service in the first half of next year. Venture Global issued a tender earlier this year to supply 12 cargoes from Calcasieu Pass as soon as October in an indication that the terminal could start exporting commissioning cargoes by the end of the year.

Wood Mackenzie said the first block of smaller, modular trains at Calcasieu Pass should be liquefying by the end of November, with all 18 trains online by the end of next year. The 10 mmty facility is under construction.

Wood Mackenzie analyst Amir Rejvani said there was an average of about two-and-a-half months between hot oil authorization and feed gas authorization at Elba Island LNG in Georgia, which also uses modular technology. At Cheniere’s Corpus Christi terminal in South Texas, where equipment is similar to the sixth train expansion at Sabine Pass, Rejvani said there were about four-and-a-half months between hot oil and feed gas authorizations

“Because there are 10 trains operating variably during start-up, it is difficult to discern when each train began liquefying,” Rejvani said of Elba’s beginnings. “However, a rough estimate of two weeks seems reasonable for initial liquefaction after feedgas approval.”

He said “because Cheniere trains are much larger, non-modular, and gas-fired,” the sixth Sabine Pass train “is assumed to need a longer commissioning process.”

U.S. export terminals have run at or near capacity for most of this year to meet increased global LNG demand. They are expected to run even more this winter as European storage inventories remain low and Asian buying hasn’t let up.

The TransCameron pipeline that would feed Calcasieu Pass has also been cleared by federal regulators to enter service. It is already receiving limited amounts of gas as Calcasieu Pass nears commissioning.