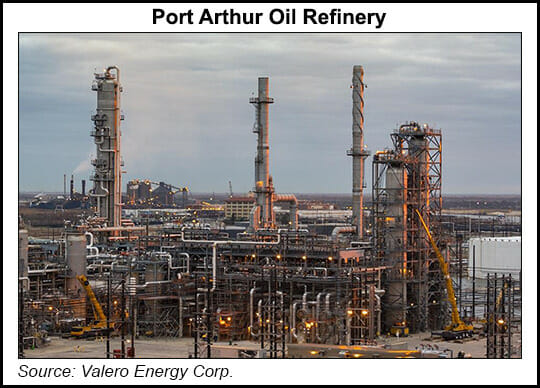 “Refining margins were supported by strong recovery in product demand coupled with product inventories falling to low levels during the third quarter,” CEO Joe Gorder told analysts during a conference call to discuss financial results for the period. “In fact, total U.S. light product inventories are now at five-year lows and total light product demand is over 95% of the 2019 level.

Valero operates 15 refineries in the United States, Canada and the UK with combined throughput capacity of 3.2 million b/d.

“Looking ahead, we continue to have a favorable outlook on refining margins as a result of low global product inventories, continued demand recovery and global balances supported by the significant refinery capacity rationalization seen over the last year and a half,” Gorder said. “In addition, the expected high natural gas prices in Europe and Asia through the winter should further support liquid fuels demand as power generation facilities, industrial consumers and petrochemical producers see incentives to switch from natural gas to refinery oil products for feedstock and energy needs.”

He added, “Continued improvement in earnings of our core refining business coupled with the ongoing expansion of our renewables businesses should strengthen our competitive advantage and drive long-term shareholder return.”

Valero Chief Commercial Officer Gary Simmons added that the firm expects jet fuel demand to surpass pre-pandemic levels in the latter half of 2022.

Simmons also noted that, while natural gas prices are high worldwide, U.S. gas continues to trade at a substantial discount to European and Asian benchmarks. This creates a competitive advantage for Valero’s U.S. refining fleet.

Capital investments attributable to Valero are expected to total $2 billion in 2021, with about 60% going toward sustaining the business and 40% toward growth projects.

“Over 60% of Valero’s 2021 growth capital is allocated to expanding the renewable diesel business,” the firm said.

The Diamond Green Diesel (DGD) expansion project at Valero’s St. Charles, LA, refinery, also known as DGD 2, was completed during the third quarter and is in the process of starting up, Valero said. DGD is a 50/50 joint venture with Darling Ingredients Inc. The expansion increases DGD’s renewable diesel production capacity by 400 million gallons/year. The project was completed on-budget and ahead of schedule, Gorder said.

A large-scale carbon capture and sequestration project with units of BlackRock Inc. and Navigator Energy Services also is progressing on schedule, Valero said.

“Navigator has received the necessary board approvals to proceed with the carbon capture pipeline system as a result of a successful binding open season,” Valero said. “Valero is expected to be the anchor shipper with eight of Valero’s ethanol plants connected to this system, producing a lower carbon intensity ethanol product to be marketed in low-carbon fuel markets that is expected to result in a higher product margin.”

Valero added that a cogeneration unit at its Pembroke refinery was completed and commissioned in the third quarter, and that the Port Arthur Coker project is slated for completion in 2023. The project is expected to increase the refinery’s utilization rate and improve turnaround efficiency, the firm said.

The declines in volumes and operating income were both mainly due to downtime as a result of Hurricane Ida, management said.

Ethanol production volumes averaged 3.6 million gallons/day, down by 175,000 gallons/day from a year earlier. The ethanol segment posted a $44 million operating loss, compared to operating income of $22 million in 3Q2020.

Capital investments including DGD and other variable interest entities totaled $585 million during the quarter, of which $191 million was for sustaining the business, Valero said. Capital investments attributable to Valero were $392 million.