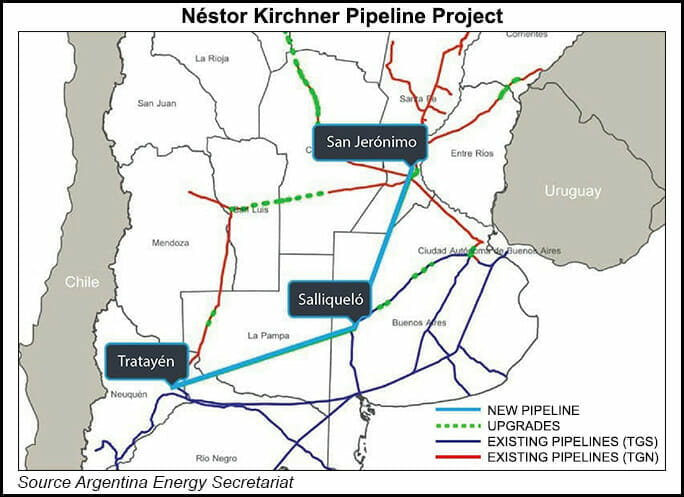 Ieasa, which is also responsible for sourcing liquefied natural (LNG) imports in the country, has been given authorization to create a trust to construct the pipeline. The state firm is launching a tender and will be in charge of construction, maintenance and operation of the pipeline.

The $1.5 billion, 24 million cubic meters/day (Mm3/d) Néstor Kirchner pipeline is to run from Tratayen in Neuquén to Salliqueló in Buenos Aires province. It would be key in allowing more natural gas from the Vaca Muerta shale formation to reach demand centers.

Officials said the pipeline would be in operation by winter 2023.

What Is In Second Phase?

A second phase of the project would include upgrades to the Gasoducto Norte pipeline system, including flow reversal works and compression stations in the north of the country. Together, the two-phased project has a price tag of $3.5 billion.

Ieasa is expected to issue an engineering, procurement and construction tender for the pipeline shortly. “A local firm will probably be involved,” Wood Mackenzie’s Ignacio Rooney told NGI from Buenos Aires. “There is ample experience in building gas pipelines in Argentina. I would expect them to work in a consortium with other firms, possibly international.”

Energy Minister Martín Guzmán called the project “one of the most important infrastructure projects in improving the country’s macroeconomic performance in the coming years.”

State oil firm YPF SA would be given capacity priority on the pipelines, with Ieasa opening the remaining capacity to third parties on a nondiscriminatory basis.

Officials have said the new pipeline project would not only help expand production from the prolific Vaca Muerta formation, but it would also serve to limit import needs, and could also potentially be a first step to LNG exports. There has also been talk of a potential natural gas pipeline to energy-hungry Brazil.

This project is “a first step to going global,” but it will also “require later steps of investment,” Rooney said. “And today I believe Argentina is not there. But it’s a step in the right direction.”

Vaca Muerta has been said to be geologically comparable to the Eagle Ford Shale in South Texas. To try to jumpstart production from the area, the current government under Alberto Fernández has held numerous natural gas purchase tenders.

In a hydrocarbons promotion bill sent to congress in September, Argentina’s government also said natural gas would be an essential part of the country’s energy transition. The bill includes price stabilization mechanisms, and guarantees that volumes produced for export will see preferential tax rates and access to capital markets.

Unconventional production hit a record in Argentina in January at 69 Mm3/d, up 2% from December and 42% from the same month in 2021. Overall natural gas production was130 Mm3/d in January, up 12% year/year.

Despite growing production from Vaca Muerta, the gas system has suffered from infrastructure and other bottlenecks, and Argentina has had to increasingly rely on LNG and Bolivian imports in the cold winter months to meet national energy demand. Natural gas makes up 58% of total energy consumption in the country, according to Buenos Aires-based IAE Argentine Energy Institute.

The second phase of the government’s pipeline project is designed to deliver domestic gas to the north of the country in light of declining Bolivian imports, Rooney said. “Gas shipments from Bolivia are slowing, so you should see more demand centers in the northern part of the country supplied by southern Argentina gas.”