The average cost of energy savings to investor-owned utilities (IOU) and other programs in a dozen states has remained steady in the last six years, tracking well below the cost of natural gas, according to a new study by the Lawrence Berkeley National Laboratory (Berkeley). 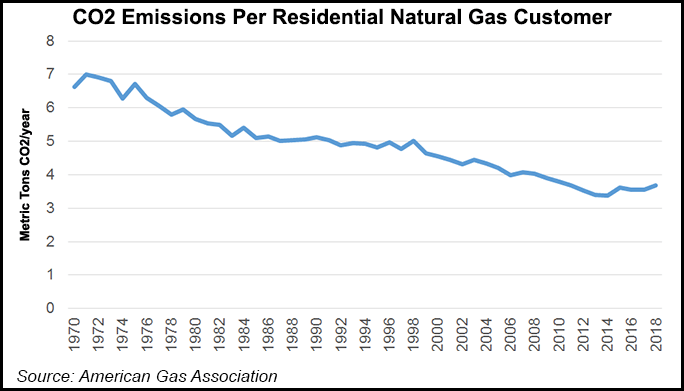 The study, sponsored by the Department of Energy (DOE) Building Technologies Office, estimated that utility efficiency programs for natural gas achieved energy savings at an average cost of 40 cents/therm from 2012 to 2017. The results are similar to a 2014 Berkeley study, which found savings at 38 cents/therm from 2009 to 2011.

The savings were better than the national average retail price of natural gas during the 2012-2017 period, which was about $1/therm, researchers said. U.S. households and businesses were found to have spent about $65 billion on utility supplied natural gas in 2018, while U.S. natural gas utilities spent about $1.3 billion a year on energy efficiency programs.

Utilities use cost performance metrics to assess the effectiveness of energy efficiency program portfolios, determine what programs to offer customers, and meet projected gas system needs at the most affordable cost, according to Berkeley researchers.

Researchers expected the costs for the new study to be higher than in 2014 given the assumed impacts of inflation on efficiency program costs and the use of different base years (2017 versus 2012), among other reasons. Although the latest study included data from more utilities, “additional analysis is required to understand factors that would explain why costs held relatively steady.”

Meanwhile, the study results showed that the average program costs trended downward from 2012 to 2017, partly driven by a shift toward longer-lasting measures.

“Time and time again, these programs have proven to be the cheapest way to cut our energy waste and forestall climate change,” said National Resources Defense Council’s Sheryl Carter, director of Power Sector, Climate & Clean Energy Program. “These results indicate it would be more cost effective for utilities (and their customers) to spend far more on these programs.”

However, the study fell short in considering the electrification of end users that currently use gas or other fossil fuels, like furnaces, stoves, and water heaters, according to the director. If electrification decreases overall energy use, and the associated climate-warming emissions from generating it by relying on renewable resources, it too is a form of energy efficiency, she said.

The American Gas Association, which is preparing a study exploring the benefits of utility energy efficiency programs, indicated that residential natural gas customers have led the nation in reducing emissions. AGA spokesman Jake Rubin told NGI that natural gas usage per household has decreased even as overall demand for energy has risen.

“With these significant investments, natural gas utilities helped their customers save 259 trillion Btus of energy and offset over 13.5 million metric tons of carbon dioxide emissions from 2012 to 2018, the equivalent to removing 2.9 million cars off the road for a year,” Rubin said.