Although brutally cold weather across much of the country is driving up natural gas delivery costs for utility companies, particularly those in the Northeast, increased production in the Marcellus and Utica shale formations has continued to push down the price customers are paying for the commodity this year as more utilities utilize local gas produced in the Appalachian Basin. 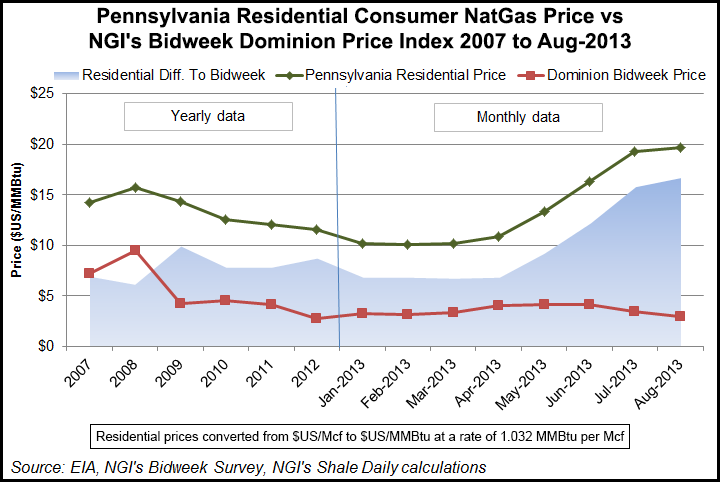 More so than anywhere else, the Marcellus in Pennsylvania and West Virginia is pumping out record-high volumes of natural gas. On Monday, the U.S. Energy Information Administration said the formation is expected to produce 18% of all U.S. natural gas production this month (seeShale Daily, Dec. 9).

Utility companies, such as those based in Ohio and Pennsylvania, are slowly utilizing more of that gas to serve customers in their own backyards. Last month, UGI Penn Natural Gas, which serves more than 350,000 customers in 15 southeastern Pennsylvania counties, said purchased gas cost rates would decrease until the end of the first quarter, primarily as a result of lower wholesale prices and increasing Marcellus production.

Under Pennsylvania law, utilities can’t earn a profit on the natural gas commodity portion of a customer’s bill. They are required to pass the cost of the gas they purchase directly through to customers without any markup. Purchased gas cost rates can be adjusted and approved on a quarterly basis.

According to officials at the Pennsylvania Public Utilities Commission, purchased gas cost rates and tariffs have declined by as much as 45-50% since 2008, attributable in part to growing shale gas production in the region. As a result, UGI customer’s will see their bill decrease by 6.3% until the rate is adjusted again.

“It is trending downward on the commodity side,” said Barry Kukovich, spokesman for Peoples Natural Gas Co., which serves 360,000 customers in southwest Pennsylvania. “Transportation costs are up right now with colder weather.”

Record-low winter temperatures in 2012 pushed both distribution and purchased gas costs down in Pennsylvania last year. A look at the statewide numbers shows the cost of residential gas has actually increased this year from last. Kukovich said Peoples is currently charging $4.32/Mcf, a fraction of the cost in 2008, but with delivery factored in, the cost goes up to $8.32/Mcf.

Despite the fact that commodity prices remain low and stable, Columbia Gas of Pennsylvania customers could see higher heating bills this winter, said Sarah Perry, spokeswoman for the company.

Earlier this year, Perry said, regulators approved an increase in Columbia’s base rate adjustment to offset capital and operational costs. From 2007-2012, Columbia invested nearly $400 million in upgrading its distribution pipeline system by replacing more than 2.3 million feet of pipe. Last year, Columbia spent more than $140 million on similar upgrades and is currently on track to invest close to $180 million this year.

Adjusted for inflation, though, Perry said the average residential customer bill remains about 26% lower than it was in 2008.

In its latest short-term energy outlook, the EIA said natural gas consumption would increase nationally this winter from 69.7 Bcf/d in 2012 to 70.1 Bcf/d. EIA said it expected households heating with natural gas to spend about 13% more this year than last, with customers in the Northeast expected to pay about 15% more as a result of colder weather and stronger demand.

Still, Kukovich said Peoples has traditionally pushed about 70% local gas from conventional wells in Pennsylvania through its pipelines, that percentage, he added, is going up with unconventional production rising in the Marcellus.

In Ohio, Neil Durbin, spokesman for Dominon East Ohio, which serves 1.2 million customers in the state where it is the single largest gatherer of conventional gas, said an impact has been felt from the Marcellus and Utica shales. He said more gas from the Utica is entering sales and reaching the company’s customers in Ohio. Industrial demand is also down, Durbin said, which has helped to keep wholesale prices flat.

Dominion’s standard choice offer for December is $4.42/Mcf, up from about $3.95/Mcf at around the same time last year.

But with additional pipeline capacity in Ohio and Pennsylvania, net inflows of natural gas to the Northeast from other parts of the country have decreased by 60% since 2008 for much of this year (see Shale Daily, Nov. 19) as a result of local production in Pennsylvania and Ohio. Durbin said he expects natural gas for residential customers to remain relatively cheap as utility companies continue to utilize supplies from the Marcellus and Utica.