There was a time not that long ago when some in the oil and gas industry questioned whether midstream companies were overbuilding infrastructure in Ohio’s Utica Shale play. 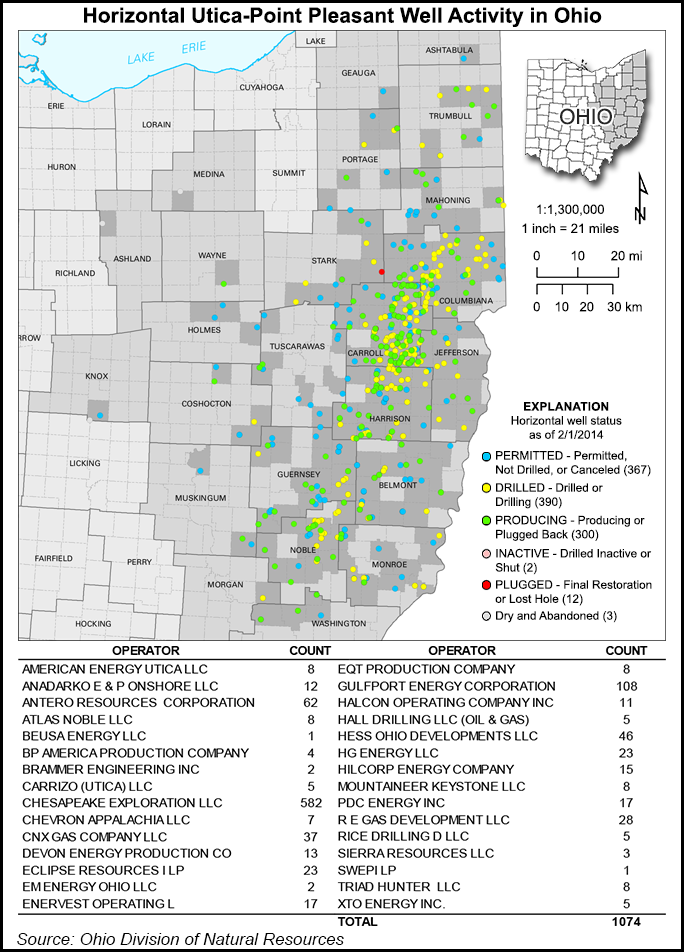 In 2012, a disappointing annual production report from the state led some to wonder if there would be enough oil and gas from the play to fill a rash of processing plants planned for the region and the pipelines that would feed them (see Shale Daily, May 17, 2013).

Nearly two years later, at the Ohio Oil and Gas Association’s annual winter meeting on Friday, midstream executives were entertaining a large crowd with a laundry list of what still needs to be done to meet the demand of producers that are expected to churn out ever-increasing volumes of dry gas, natural gas liquids (NGL) and condensates in the coming years.

“Producers are spending a heck of a lot of money up here, and Chesapeake won’t even fit on my graph because they have close to 600 wells drilled, permitted or producing,” said George Francisco, CFO of M3 Midstream LLC, as he delivered a presentation focused on the future of infrastructure in Ohio. “Based on this and what we’re seeing, we’re confident these midstream facilities are going to be well utilized.”

Nearly 800 horizontal wells have been drilled in the state to date, according to the Ohio Department of Natural Resources. But Larry Wickstrom, of Wickstrom Geosciences, estimated that only 215 of those wells were completed last year, down from 221 completions in 2012, when commercial production in the Utica truly began to hit its stride.

“Midstream is actually catching up with the producers, but it’s been a very difficult winter for both of us because of the cold weather and the characteristics of the gas coming out of the well,” Francisco said. “We really feel like when the weather starts to get warmer, the producers are really going to be bringing on these wells and production is going to surge here in Ohio.”

It’s no secret that the Northeast remains daunted by midstream constraints. Industry officials have repeatedly said a push to solve that problem will dominate their discussions for years to come.

A recent analysis of U.S. Energy Information Administration data by researchers at the Marcellus Center for Outreach and Research showed that midstream investment in the Northeast totaled $2.4 billion in 2013 (see Shale Daily, Feb. 25). By the MCOR’s calculations, the region is expected to see continued investment of nearly $1 billion per year until at least 2016.

But the game is about to change in a big way, according to presenters at Friday’s meeting. First, midstream was focused on getting dry gas from well sites to markets and then that shifted to processing the Utica’s wet gas and taking ethane off the gas stream. Now, many are focused on moving NGLs to the Gulf Coast where the infrastructure is in place to handle them.

“There’s a massive amount of NGLs that must be dealt with,” Francisco said. “We’ve talked a lot about processing and fractionation in recent years, but on the midstream side there’s a heck of a lot more to do in different areas. This play has a rich window, a dry window and a condensate window. We feel the next area of focus will be on the condensates, which need gathering, need stabilization; it needs a place to go, it has to get to rail, to truck, to pipe. There’s a lot to do now that we’re getting the rich gas and processing squared away, and it’s going to be time to focus on the condensate soon.”

The Appalachia-to-Texas Express is currently handling ethane takeaway in the Northeast, and when completed, Mariner East will take care of more (see Shale Daily, Dec. 5a; Dec. 5b). Along with those solutions, plans for two major y-grade lines, the Bluegrass pipeline and the Utica Marcellus Texas Pipeline, have eased some concerns about a liquids bottleneck in the play (see Shale Daily, Oct. 25, 2013; Aug. 12, 2013).

Paul Weissgarber, senior vice president of Crosstex Energy, agreed with Francisco, and said he expects operators in the Utica to be producing 100,000 b/d of condensate in three to five years.

“I would see us putting in additional storage at those market hubs and route terminals on Ohio Central Railroad to meet that demand,” he said. “We think there’s going to be a lot of new product leaving the market.”

Both Weissgarber and Francisco see a mass exodus of NGLs and condensate moving south from the Northeast to the Gulf Coast in the coming years.

“Some have a view that there’s a point when local fractionation stops making sense and you have to begin shipping all the y-grade down to the Gulf Coast because of the size of the industrial complex there compared to the Northeast.”

Weissgarber went further in his assessment.

“I know everyone is thinking all these petrochemical facilities are going to be built up here in the Northeast, but in our view, that’s just not going to happen,” he said. “As you think about these complexes on the Gulf Coast, there’s literally billions of dollars in all these integrated efforts there. We may see that up here decades from now, but it won’t happen anytime soon. You’ve got to get the y-grade built, everyone has been clamoring for processing, but the next critical piece of the midstream infrastructure here is the NGLs and they’re going to have to leave the marketplace.”