Ascent Resources LLC announced on Friday that it would acquire 113,400 net Utica Shale acres for $1.5 billion in a package of deals with multiple sellers, ballooning the company’s position in the play to more than 300,000 net acres and becoming one of the country’s largest private exploration and production (E&P) companies in the process. 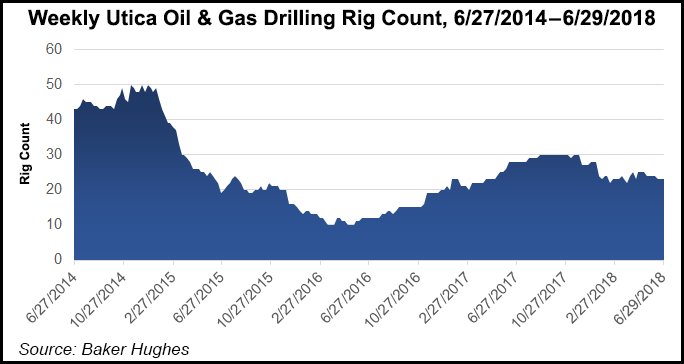 The deals, cut with Hess Corp., CNX Resources Corp., Utica Minerals Development and another undisclosed seller are expected to close in the third quarter. The package also includes 93 operated wells and 216 MMcfe/d of production, including 19% liquids.

CEO Jeff Fisher said the bolt-on was a “milestone” for the company, which had its beginnings in 2013 when the late Chesapeake Energy Corp. co-founder Aubrey McClendon started a predecessor company to develop affiliates across the country with basin-specific strategies.

“We continue to consistently deliver basin-leading well results through our best in-class operations and after completion of these acquisitions, we will become one of the largest privately held E&P companies in the U.S. in terms of asset size and net production,” Fisher said.

Ascent and its affiliates plan to fund the transactions with about $965 million of common equity and $535 million of borrowings under the company’s revolving credit facility, which was recently upsized. The announcement further consolidates the Appalachian Basin as Ascent said the assets are largely contiguous with its existing position, allowing the company to extend lateral lengths, improve efficiencies and gain more exposure to liquids.

Hess Corp. and CNX Resources Corp. came forward to enable a large part of the deal by agreeing to sell their 50/50 joint venture assets in Ohio for $800 million as both look to continue funding share repurchase programs and core development.

The JV divestiture includes 78,000 net Utica acres, 52,000 of which are undeveloped. Each company would receive $400 million in proceeds at closing, a CNX spokesperson said.

The assets are in the wet gas window of Belmont, Guernsey, Harrison and Noble counties. Full-year 2018 production from the properties is forecast to average 14,000 boe/d, of which 70% is expected to be residue gas, Hess said.

The announcement ends a nearly seven-year partnership between the two companies. For Hess, the sale marks an exit from Ohio, and it would free up more cash for other onshore operations and a major oil discovery offshore South America that it’s developing with ExxonMobil Corp.

“We continue to focus our portfolio by divesting lower return, noncore assets as part of our strategy to deliver long-term value to shareholders,” CEO John Hess said. “Proceeds from this transaction will be used to invest in our higher return growth opportunities in Guyana and the Bakken, and to fund the company’s previously announced share repurchase program.”

Appalachian pure-play CNX, which has divested more than $500 million in noncore assets since last year when it ditched the coal business to become a standalone natural gas producer, said much the same. The company said proceeds would be invested into the drilling program, bolt-on acreage, share repurchases and paying down debt.

“This transaction is immediately accretive and brings forward the value of assets that were simply outranked by other options in CNX’s opportunity set,” CEO Nicholas Deluliis said. “We will evaluate the use of proceeds through the same capital allocation filter and be methodical in our decision-making.”

CNX still holds more than 600,000 net Utica acres across the Appalachian Basin. It has focused its Ohio operations primarily in Monroe County. The company said the divestiture would reduce 2018 production by 10 Bcfe. It has reduced full-year guidance to 490-515 Bcfe as a result. For 2019 and 2020, the sale is expected to reduce production volumes by 20-25 Bcfe.