The Utica Shale continues to make headlines, with its third milestone moment coming last week when the Ohio Department of Natural Resources (ODNR) released data showing that more than 1,000 horizontal wells have been drilled in the formation. 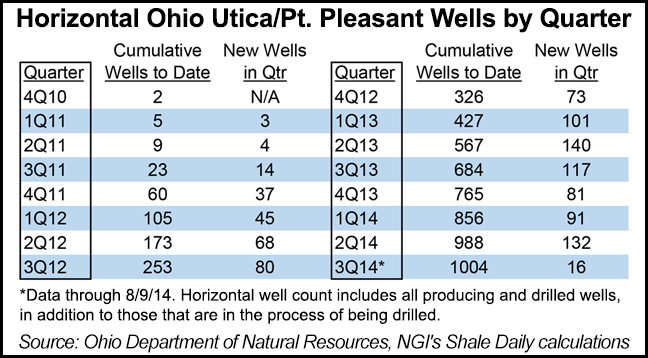 That rounds out a hallmark stretch that’s come over the last eight months. As of Aug. 9, operators had drilled 1,004 Utica wells and 495 of those were producing, according to ODNR. Last November, the agency issued its 1,000th horizontal permit (see Shale Daily, Dec. 6, 2013), in what sources said at the time represented the oil and gas industry’s early satisfaction with the play.

In July, ODNR said combined unconventional and conventional natural gas production in Ohio nearly doubled, from 86 Bcf in 2012 to 171 Bcf last year (see Shale Daily, July 2). The increase was driven mainly by high-volume horizontal fracturing (fracking) from 352 Utica and Marcellus Shale wells, which accounted for 100 Bcf of the 2013 total.

Ohio issued its first horizontal drilling permit in 2010. By 2011, Chesapeake Energy Corp. had drilled a series of the state’s first horizontal wells and it wasn’t until 2012 when operators brought the first commercially producing Utica wells online in the state.

Earlier this month, the U.S. Energy Information Administration (EIA) said it could no longer ignore the rapid rate of growth in the Utica, and would add the formation to its drilling productivity report (see Shale Daily, Aug. 1), which tracks oil and gas production in the nation’s leading fields. Monday’s report by the EIA estimates natural gas production in the play will grow by 78 MMcf/d from August-September, with monthly production exceeding 1.3 Bcf/d (see Shale Daily, Aug. 12).

Although Ohio operators are mostly focused on the Utica, ODNR data also shows that 44 horizontal Marcellus permits have been issued and 27 wells have been drilled in the state.