It’s too early in the game to know if the productivity power of the Utica/Point Pleasant Shale in Ohio and western Pennsylvania will match other U.S. unconventional plays, but initial natural gas well data is encouraging, and if the oil-prone window is successfully derisked, the play could prove to be a triple-play hydrocarbon monster, according to IHS Inc. researchers. 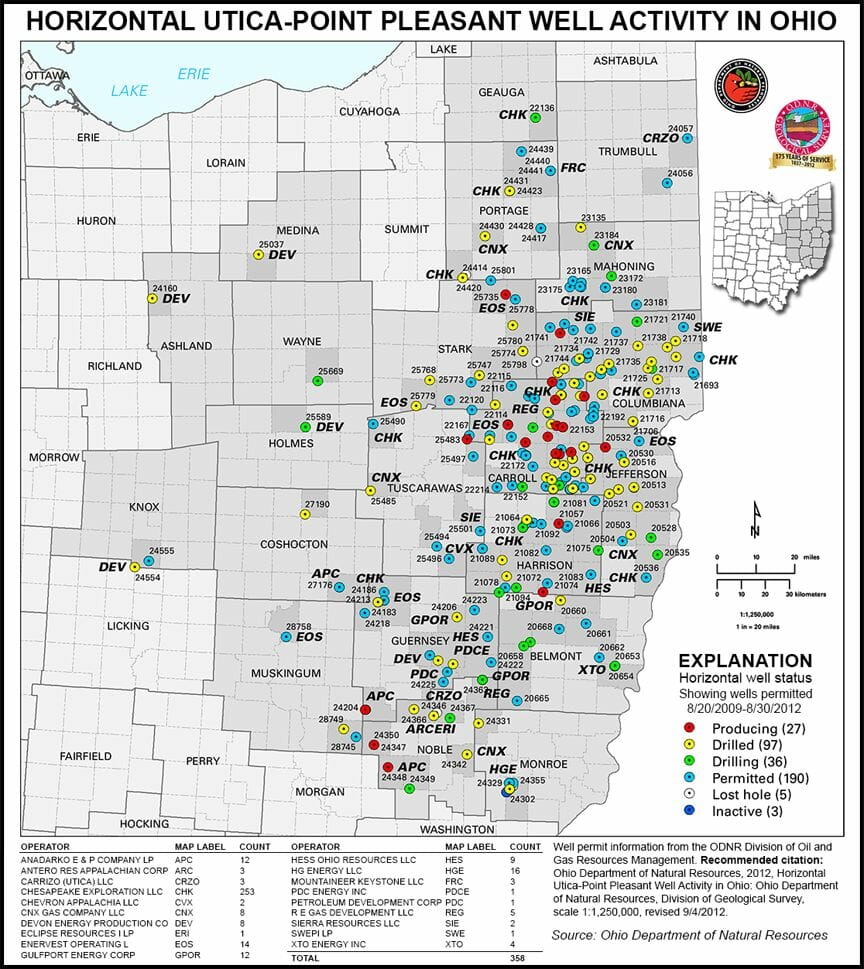 “To date, horizontal drilling results in the Utica have been very encouraging, with activity so far focused on targets within the wet gas window,” said IHS’s Andrew Byrne, who directs energy equity research and who authored the “IHS Herold Utica/Pleasant Point Shale Regional Play Assessment.”

“Approximately two-thirds of the horizontal wells drilled on the play have reported 24-hour initial production (IP) rates of 1,000 boe/d or more, which supports our opinion that early results are encouraging,” Byrne said. “However, the Utica is still in the very early stages of exploration; only in late 2010 did the industry start moving from drilling vertical exploratory wells in the play to permitting horizontal wells.”

Only a few horizontal wells have been drilled, making it premature to declare the “sweet spots” within the play, he said. The most productive liquids-rich wells to date are in Ohio’s Harrison and Carroll counties and are operated by Chesapeake Energy Corp., “the most dominant company in the play in terms of total acreage and wells drilled.”

According to the IHS Well and Production Database, more than 135 drilling permits have been granted for Utica horizontal wells, but only 11 have been completed with IP test volumes. Drilling depths for the Utica ranged from about 6,000 feet total vertical depth (TVD) to 9,000 feet TVD. Typical wells in the Eagle Ford Shale have depths ranging from 9,500 feet TVD to 11,500 feet TVD, IHS noted.

“Initially, we expected the Utica’s proximity to northeastern U.S. would result in premium pricing for natural gas similar to the Marcellus Shale. However, recent prices in the region suggest that this is no longer a safe assumption. The play is somewhat shallower than the Eagle Ford, which means the wells should be less expensive to drill, so there should be some cost advantages.”

According to IHS, an assessment of the Utica’s well distribution analysis “gives the current productivity advantage to the Eagle Ford play.” Ohio only reports production on an annual basis, making a “true peak 30-day rate” unavailable. Instead, IHS derived “an inferred” 30-day peak rate by taking the actual 24-hour IP rate and reducing it by 40%, which researchers determined was a reasonable number.

The three best wells in the Utica have calculated production rates of more than 750 boe/d, according to IHS. However, all three wells are are in the gas-prone window and are reported to have flowed 100% natural gas. “The Utica well distribution performance is encouraging, considering the early stage of the play, with a large percentage of wells coming in at 600 boe/d or more,” researchers said.

“Based on our early research, it appears the vast majority of the Utica liquids volumes are lower-value, natural gas liquids (NGL),” said Byrne. “Therefore, much of the economic outlook for the play relies upon not only natural gas prices, which remain low, but also prices for natural gas liquids, which have been highly volatile.

“Successful de-risking of the oil-prone window would greatly enhance the attractiveness of the play. We also believe that additional experience and technological advancements, as well as infrastructure buildout, offer the potential for improved well performance over the early data.”

The initial horizontal drilling results in the oil-prone window only now are becoming available, according to IHS. Anadarko Petroleum Corp. has reported the “best oil-weighted well drilled to date” in Noble County, OH (see Shale Daily, April 20). The Brookfield A-3H well in 1Q2012 “tested at a 24-hour IP rate of 731 boe/d (82% oil and condensate).

“Anadarko has 390,000 gross acres prospective for the Utica. Devon Energy Corp. also has several wells in process in the oil-prone window, which IHS believes will deliver critical insights regarding the relative attractiveness of the area,” researchers said. The largest acreage holders in the play are No. 1 Chesapeake Energy and No. 2 EnerVest Ltd., which are both seeking partners in the play. EnerVest disclosed plans to sell most of its Utica leasehold last month (see Shale Daily, Sept. 18). Chesapeake, which sold a one-quarter stake in its Ohio leasehold to French oil major Total SA late last year, continues to look for other joint venture partners in the play (see Shale Daily, Sept. 13; Jan. 4).

The IHS Herold assessment also includes insight into the exploration and production activity in the region, discoveries to date and estimated reserves, along with company valuations for some of the key acreage holders in the play.