Utica Shale production continues to drive significant increases in the property taxes collected by counties in Eastern and Southeastern Ohio, according to updated data released by two industry trade groups on Wednesday. 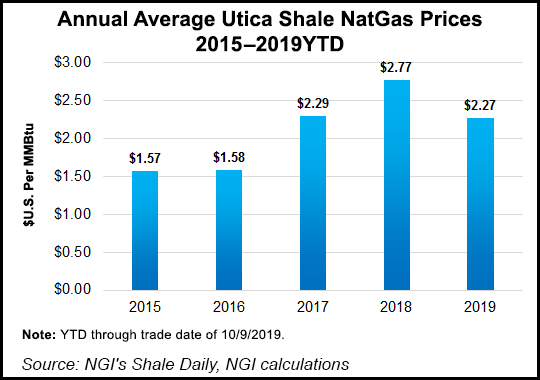 From 2010-2017, the Ohio Oil and Gas Association and Energy In Depth found that the industry paid $141.9 million in real estate property taxes on production, or more than triple what they reported two years ago in the first analysis, which covered 2010-2015. The initial analysis found that $45 million was paid.

Oil and gas production in the state is assessed and taxed as real estate, similar to property taxes. Counties collect the ad valorem tax and allocate it to cities, villages, townships and schools impacted by development. The sharp increase for the latest period analyzed, the groups said, corresponds with a spike in oil and gas production.

The latest report analyzed tax data from Belmont, Carroll, Guernsey, Harrison, Monroe and Noble counties, as did the previous analysis, but it added Columbiana and Jefferson counties. Those eight counties account for the majority of the state’s shale production. Between 2013 and 2017, oil production in the state increased by 356%, while natural gas production increased by 1,647%.

Production has continued to increase, with unconventional gas volumes last year exceeding 2 Tcf for the first time. As a result, the groups said communities in shale producing counties should expect to realize $200-250 million from real estate property taxes on wells from 2016-2026.

Figures included in the report were obtained through public records requests from each of the eight county auditors, as well as data from the Ohio Department of Natural Resources (ODNR). The value of reserves assessed for collection is based on production volumes reported to ODNR.

“The methodology of the report demonstrates the pure value of these revenue streams for these communities,” said Energy In Depth spokesman Dan Alfaro. “These figures are not hypothetical, they show completed payments that are ”in the bank’ of each of these counties.

“Additionally, they show only the revenue generated by ad valorem taxes collected and do not take into account additional taxes paid by the industry, or the influx of economic activity experienced in the counties where workers are spending their money.”