The stubborn cold of last winter that buoyed natural gas prices and wells that keep flowing at surprising rates, combined with a slowly breaking bottleneck and a race to push the play’s boundaries beyond Ohio in search of more liquids once again has the spotlight growing brighter on the Utica Shale. 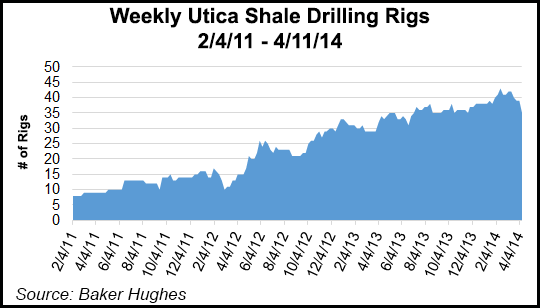 To hear financial analysts who attended the Independent Petroleum Association of America’s Oil and Gas Investment Symposium (OGIS) in New York City last week, the exploration and production companies that have either bet it all on the Appalachian Basin, or committed a sizeable chunk of their portfolio to it, are in high demand as far as interest is concerned.

The Utica, in particular, has gone from being considered a bonus or a Marcellus Shale side note during conversations or presentations at similar conferences in the Northeast to an increasingly interesting prospect (see Shale Daily, April 9).

“Utica names certainly were in demand this week with more discussions on the size of the wells, type curves, returns and pricing/infrastructure availability all being explored,” said Wunderlich Securities analyst Jason Wangler in a note to clients following the OGIS conference. “Further, more players to the south and west of the play in the gas window have become en vogue and interesting given recent well results in the region.”

The Utica attention is building again after operators set into the methodical pace of developing their acreage last year. And after 2012, when natural gas prices sagged and analysts soured on a year-end production report that looked all too gassy (see Shale Daily, May 17, 2013).

But with more wells drilled, rising initial production rates in southeast Ohio and a willingness to push the play’s boundaries into western Pennsylvania and northern West Virginia (see Shale Daily, March 26), both the plays major operators, and a few lesser-known names that have seemed to long toil in the play, are earning more recognition.

The Marcellus Shale’s fortune as the nation’s biggest gas field can’t be overlooked in the Utica’s trajectory either. As operators prepare to drill and test Utica wells in Pennsylvania and West Virginia, sources believe that existing infrastructure and leases can be leveraged to accelerate the pace of development outside of Ohio.

“The thing about the Utica is that the footprint is so much smaller than the Marcellus,” said Consol Energy Inc.’s Andrea Passman, director of engineering for gas operations, in addressing a crowd at last week’s NAPE East business conference in Pittsburgh. “Figuring out really where the optimal area in the Utica is going to be, and delineation, is kind of the critical moment we’re at right now. When you look at a play like that, we want a certain amount of gas and we’re looking for a perfect mix in order to get the liquids out.

“I think what you’re going to be seeing in the Utica is everyone trying to figure out where that margin is at and then we’re going to see everyone sort of pounce on it and really start into an extreme development mode.”

Passman added that she didn’t believe development had even hit full stride in Ohio, as many analysts and other operators have said. She said delineation efforts continue and there remains little knowledge about the viability of the play’s oil window. What’s more, she said operators cannot often transfer what they’ve learned in the basin’s shallower formations to the Utica.

“The other thing about the Utica is we’re seeing a lot of traditional completion techniques from the Marcellus being applied; it’s a different animal and it’s not the Marcellus in any way, shape or form,” Passman said. “So, in terms of these types of plays like the Utica, where we do have a lot of liquids, evaluating our completion techniques and getting that nailed down very quickly is where all the operators are driving to.”

The latest production data available from the Ohio Department of Natural Resources (ODNR), shows that 245 Utica wells produced 33.6 Bcf/d of natural gas and 1.3 million bbl of oil in 3Q2013 (see Shale Daily, Jan. 2). ODNR spokesman Mark Bruce said data from the first, second and fourth quarters of last year is still being compiled and he couldn’t say when that data will be released.

Passman acknowledged that little is known about “what’s driving” the Utica’s petroleum system. Given the current rate of development, she said she expects that operators will have more answers in six to eight months, at which point “the whole region will take off” and the play’s development core will be narrowed from a roughly nine-county footprint (see Shale Daily, Nov. 19, 2013).

Abarta Energy CFO Tom Bartos also said at NAPE East that when operators such as Range Resources Corp., Magnum Hunter Resources Corp., Gastar Exploration Inc. and others drill the first Utica wells in southwestern Pennsylvania and northern West Virginia, development of the formation in those states will occur more quickly than it has in Ohio because of preexisting infrastructure and leases.

The delineation scramble in Ohio was evident in a note from analysts at Tudor, Pickering, Holt & Co. (TPH) last week after the OGIS conference. They said a number of leading Utica operators at the conference noted that acreage is getting tight in Ohio.

While the land-grab has indeed been over in the state for sometime now, new entrants such as American Energy Partners LP (see Shale Daily, Oct. 3, 2013) have snapped up large blocks of remaining acreage and joint ventures have also whittled down what little is left. TPH said transactions have approached the $15,000-20,000/acre mark in some instances, as other companies such as PDC Energy Inc. and Magnum Hunter have opted to scoop up land for delineation in the play’s southernmost tip of Washington County.

Another attention-getting facet of the play in recent months has been some of the eye-opening initial production (IP) results. There was Gulfport Energy Corp.’s Irons 1H in Belmont county that tested at an IP of 30.3 MMcf/d (see Shale Daily, Nov. 8, 2013); Magnum Hunter’s Stalder 3UH in Monroe County at 32.5 MMcf/d (see Shale Daily, Feb. 14) and Carrizo Oil Gas Inc.’s Rector 1H in Guernsey County, which has consistently pumped out 500 b/d of condensate since January (see Shale Daily, Jan. 7).

Meanwhile, Magnum Hunter is preparing to drill its first Utica well in West Virginia (see Shale Daily, March 14), just as Gastar has started to do there. Range Resources is also preparing for a closely watched Utica well it has planned in southwest Pennsylvania.

Magnum Hunter to Add a Rig

At OGIS, Magnum Hunter executives said the company will deploy an additional rig next year to accelerate Utica development, with the potential to hit five rigs by 2015. The company, TPH said, is also considering a number of financing options to bolster its Appalachian efforts, including one that might ultimately find it selling oily production in North Dakota’s Bakken Shale play to move more capital toward gas-directed drilling.

But more production in the Northeast means more strain on midstream and TPH added in a separate note on Tuesday that widening basis differentials in the coming months and beyond will be a necessary part of the infrastructure growing pains in the Northeast.

To be sure, there is optimism, pipeline additions in the Northeast are expected to account for a large majority of such investments across the nation in the coming years. (see Shale Daily, Feb. 25).There’s about 2.5 Bcf/d of takeaway capacity in the Utica today (see Shale Daily, March 10), but TPH expects that incremental additions will bring capacity to about 18 Bcf/d in the Northeast by late this decade.

There are reminders, though, of the challenges ahead for operators in the Utica Shale. EV Energy Partners LP recently said it will pick up some of the wildcatting slack in Ohio to continue efforts at cracking the play’s oil code by drilling up to 10 wells in Stark and Tuscarawas counties, where just 31 horizontal permits have been issued between both counties to date.

And on Monday, pure-play Appalachian operator Antero Resources Corp. showed how tenuous optimism for the Utica can be when it announced that it was lowering some of its type curves in the Utica by more than 30% each (see Shale Daily, April 14). Although its stock seemed to be regaining ground in midday trading on Tuesday, Antero’s announcement sent its shares plummeting to close at $59.06 for a loss of $4.41/share on the day — its biggest drop since the company debuted on the New York Stock Exchange last October (see Daily GPI, Oct. 11, 2013).