For the first time since it began tracking quarterly production data in early 2014, the Ohio Department of Natural Resources (ODNR) reported late Friday a sequential drop in first quarter oil production statewide, reflecting the commodities downturn and a shift to better economics in the Utica Shale’s dry gas window. 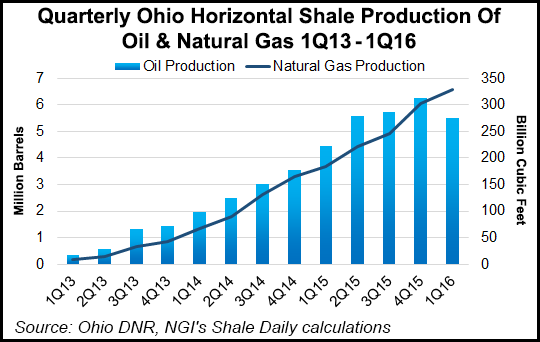 Never a bastion for liquids production, Utica oil volumes have nevertheless been on the rise since 2011, when the first commercial production was reported from just five wells drilled by Chesapeake Energy Corp. (see Shale Daily, April 3, 2012). Until the Friday report, oil production had increased, going from just 46,326 bbl in 2011 to a high of more than 6.2 million bbl in 4Q2015 (see Shale Daily, March 9). ODNR said shale wells in the state produced about 5.5 million bbl in 1Q2016, which was still an increase from the 4.4 million bbl reported during the year-ago period.

Low commodities have pushed shale drillers almost exclusively to their dry natural gas acreage, where low breakeven prices, prolific wells and, in some cases, better infrastructure have helped them weather the downturn (see Shale Daily, April 7). Natural gas production in the state was up again in the first quarter, setting a record of 329.5 Bcf, compared to 183.6 Bcf in 1Q2015 and 303 Bcf in 4Q2015. Ohio law does not require the separate reporting of natural gas liquids or condensate, those are included in oil and gas totals.

There are currently 2,183 Utica wells permitted in the state and 1,751 drilled, compared to the 1,926 permits issued and the 1,497 wells that were reported drilled at about the same time last year, according to ODNR data. Marcellus Shale activity has remained unchanged year-over-year at 44 Marcellus wells permitted and 29 drilled.