A report released earlier this month that details activity in Ohio’s Utica Shale play underscores the rapid rate at which midstream companies are working to catch-up with exploration and production companies that have a backlog of wells shut-in and waiting to come online. 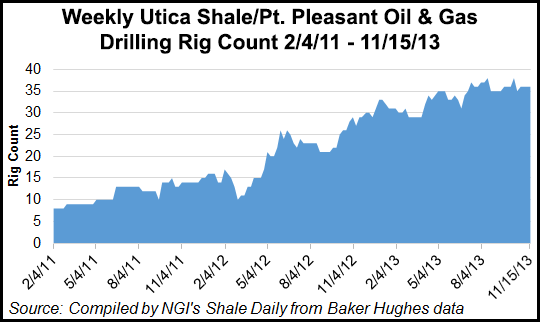 Chip Collier, co-chairman of the oil and gas law group at Benesch, Friedlander, Coplan & Arnoff, which compiles the report quarterly, said there’s about $12 billion “on the books” dedicated to processing facilities and pipelines that are under construction or nearing completion.

“The buzz has always sort of been about playing catch-up on processing and we’re well on schedule to do that,” Collier said. “I’ve personally attended a number of midstream conferences and the message is very clearly Gung ho.

We’re also seeing a lot more production activity down toward the southern part of the state (See Shale Daily,Nov. 19). There’s every indication that things are full speed ahead, and I really think you’re going to see this [play] start blossoming in the next year or so.”

A large part of the reason more exploration and production companies are moving south toward Belmont, Guernsey, Noble and Monroe counties — and away from what was long the hotspot established by the state’s largest driller, Chesapeake Energy, in Carroll, Columbiana and Harrison counties — is because of the processing facilities and pipelines that have either been completed or those that are slated for completion in the near future, Collier said.

Benesch’s report provides a comprehensive round-up of 3Q activity in the Utica. Among the highlights included in is the $1.5 billion Blue Racer Midstream project, a joint venture of Dominion and Caiman Energy II, LLC.

Kinder Morgan and MarkWest signed a letter of intent to form a midstream JV to pursue two projects in Ohio, Pennsylvania and West Virginia in the third quarter. One project is a 400 MMcf/d cryogenic processing complex in Tuscarawas County and the other is a 200,000 b/d NGL pipeline. The two companies also intend to build a $1 billion natural gas processing plant and pipeline in Uhrichsville, OH, to carry liquids to the Gulf Coast.

On the exploration and production side, Gulfport Energy increased its position to hold 145,000 acres and has since reported solid results at wells it operates in the southern part of the state.

The report also said that “well results are redefining the shale landscape [in Ohio] for several players. Chesapeake, an early lessee in the Utica rush, seems slightly out of target at the moment, while Gulfport is well positioned.”

In its 3Q report, though, Chesapeake said its net production averaged 164 MMcf/d of natural gas equivalent, or a 91% increase from 2Q2013. It also faces a common hurdle in the Utica that’s confronting other operators. It had drilled 377 wells as of Sept. 30, with 208 of those waiting on pipeline connections or nearing completion.

The Benesch report also highlighted Aubrey McClendon’s return to the Utica just months after he left Chesapeake, the company he co-founded, in April (See Shale Daily, Oct. 3) McClendon’s new outfit, American Energy Partners, already has raised $1.2 billion in equity and debt financing, according to the report. In the third quarter, American Energy was purchasing leases on more than 22,500 acres.

There have been at least 30 rigs working in the Utica and Point Pleasant shales since April, and 36 rigs have been operating in the formations for the past four weeks, according to Baker Hughes data.