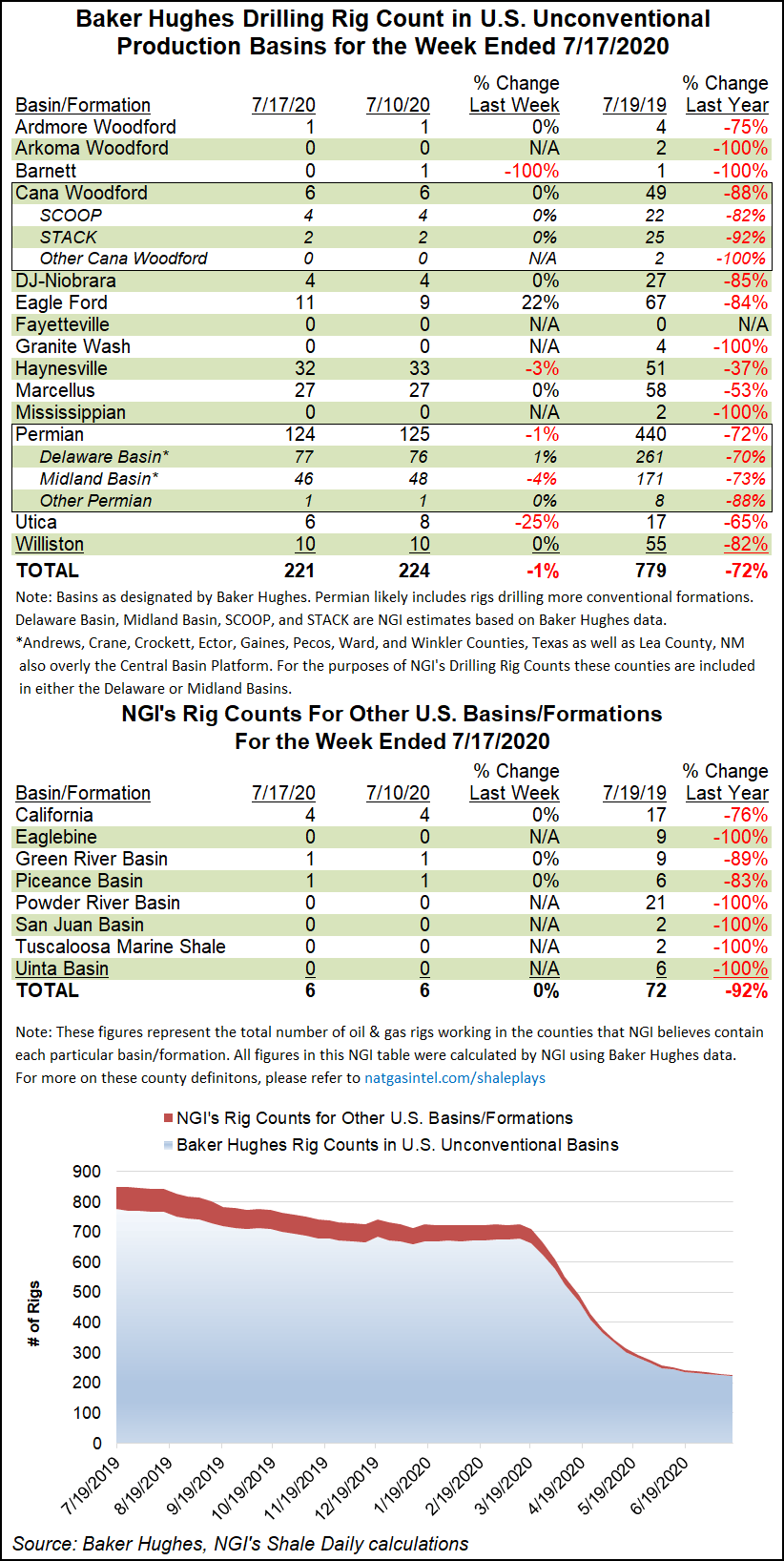 A drop-off in the Utica and Haynesville shales saw the U.S. rig count fall five units to finish at 253 for the week ending Friday (July 17), according to the latest figures from Baker Hughes Co. (BKR).

Four natural gas-directed rigs exited the patch in the United States during the week, joined by one oil-directed rig. The 253 active U.S. rigs as of Friday compares with 954 rigs running at this time last year.

All of the domestic declines occurred on land, with the Gulf of Mexico continuing to run 12 rigs, down from 25 a year ago. Five horizontal and four vertical units departed, partially offset by the return of four directional units, according to BKR.

In Canada, six rigs — all gas-directed — returned to action during the week, growing the Canadian rig count to 32, versus 118 in the year-ago period.

The combined North American rig count ended the week at 285, versus 1,072 at this time last year.

Among plays, the Utica saw the largest net drop for the week, with two rigs exiting to leave the gassy play with just six active rigs, down from 17 in the year-ago period. The Barnett Shale, the Haynesville and the Permian Basin each dropped one rig.

On the other side of the ledger, the Eagle Ford Shale picked up two rigs on the week to grow its tally to 11, versus 67 a year ago.

Among states, Texas saw the largest drop week/week at three units, followed by Ohio, which dropped two. Louisiana and Pennsylvania each dropped one rig week/week, while New Mexico and West Virginia each added one, BKR data show.

The number of oil and natural gas wells likely to be drilled around the world this year is forecast to hit its lowest level since at least the early 2000s, with North America the most impacted from slumping demand in the age of Covid-19, according to a recent analysis from Rystad Energy.

Meanwhile, Raymond James & Associates Inc. analysts estimate that the decline in the U.S. oil and gas rig count may be close to a bottom, and the current commodity strip could allow activity to grind higher.

Analysts Praveen Narra and Kirk Presley Sr. in a note to clients said most of the pain of the downturn related to Covid-19 and slumping prices “has already been felt, with the current commodity strip allowing for activity to bottom and start to grind higher.” The soon-to-come bump, however, likely would be weighted to completions as exploration and production operators draw down their drilled but uncompleted wells.