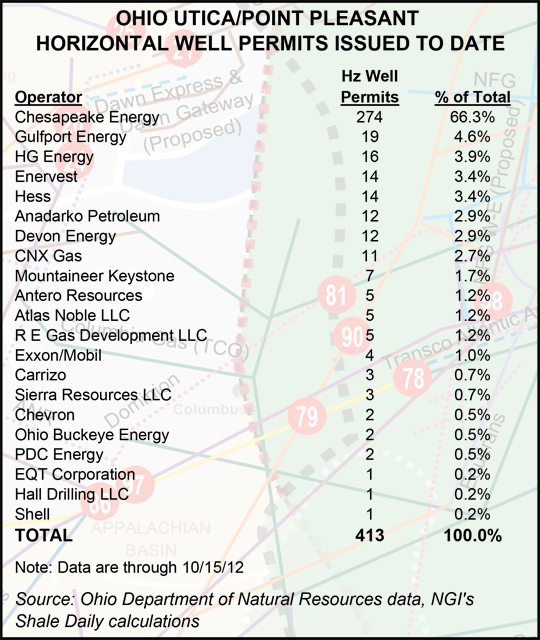 Speaking to CNBC’s Jim Cramer, host of “Mad Money,” the Chesapeake chief was in Ohio for a sit down in one of the few one-on-one interviews he has given since being ousted from his post as chairman earlier this year. The company remains embroiled in investigations under way by the Securities and Exchange Commission. However, the CEO is confident that the company has leaped many of its hurdles and will continue to transition to oil, largely with help from Ohio’s Utica Shale.

CNBC, as well as NBC News, devoted some of their airtime on Thursday to Ohio’s manufacturing renaissance, brought about in the past three years from the rebirth of the U.S. auto industry, as well as a growing oil and gas sector (see Shale Daily, Oct. 19). McClendon talked about the Utica, as well as Chesapeake’s outlook, as one of Cramer’s guests on “Mad Money.”

The company four years ago was the first big producer to unlock the unconventional natural gas and oil potential of the Utica, a nearly spent conventional oil play, and it has since captured the biggest leasehold, with close to one million acres. With 413 permits issued in Ohio’s Utica and Pt. Pleasant formations so far to date, Chesapeake’s 274 permits received accounts for just shy of two-thirds of the total, according to data from the Ohio Department of Natural Resources and NGI‘s Shale Daily calculations.

Chesapeake is looking for a joint venture partner to help defray some of its drilling costs (see Shale Daily, June 5). However, McClendon told Cramer that Chesapeake has more than enough acreage to help lead its transition from gas to oil over the next few years.

“What is the economic impact on everybody from the landowners to the people who run hotels, the people who run McDonald’s?” asked Cramer. “There were not a lot of jobs not long ago,” Cramer said of the Ohio portion of the Utica Shale. The Utica today, he told McClendon, “is that house you built.”

“We are midway basically between Pittsburgh and Cleveland,” said McClendon. “Those two cities serve as the bookends of what was the anchor, foundational birthplace of American industry…For the past 30 or 40 years this area’s been known as the Rust Belt,” but “the discovery of the Utica is going to be a liberating experience not only for this part of Ohio but for all of America’s manufacturing base.”

Chesapeake has had to “scramble” to transition from gas to oil, Cramer said. He asked McClendon about the company’s progress to date.

“Two years ago we were the top 30 oil producer in the country,” said the CEO. “Today we’re No. 12. I think it’s a natural outcome of our strategy to be the fifth or sixth largest producer in another two or three years…” The transition has “not been as elegant as I would have liked. We’ve had to spend a lot of money to make that transition. And we’ve had to do it while natural gas prices have been falling for four years…after the warmest winter in 100 years…This has been a tumultuous year for us, but we’re coming out of it in great shape and I’m looking forward to our company being one of the best performers in the energy industry for many years to come.”

Cramer said Chesapeake’s investor relations presentations refer to the company as the “most shorted large cap stock in America. I want to know why that is.”

“I presume it’s a bet against natural gas,” said McClendon. “If you look at that short position, much of it was established in the first part of the year; about 14% of our stock has been sold short. So if you consider that there are people out there with agendas that would like our stock price to go down, that helps explain some of the background stories about us…If those guys are short our stock because we’re not going to make the transition successfully to oil or we’re not going to improve our balance sheet, where natural gas is going to be a low price…as low as it has been in 2012…or that we’re going to have winters as warm as last year, those are all wrong bets.

“At some point people who are short our stock will need to buy it and we’ll welcome them on the other side of the fence.”

McClendon co-founded the company and had been its guiding force until this year, when the board replaced him as chairman with Archie Dunham, who was considered a conservative oil man when he ran ConocoPhillips. How have things changed, Cramer asked.

“Think about this. We’re going to end up selling $17, $18 billion of assets in 2012 and 2013, more than our market cap, and we’re still going to grow 20% in those two years. It’s a reminder of the huge amount of asset value that we have,” said McClendon. “We’re going to have a better balance sheet. We’re going to have a tighter operational focus, better governance. All those things are going to combine together…to unlock that huge, latent value…”

Is Chesapeake, i.e., McClendon, now “restrained” enough for the new board, many of whom have “traditional backgrounds and may not like the old wildcatting ways” of the company?