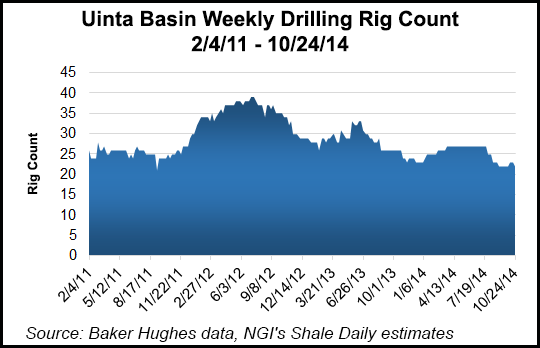 Speaking to a full room on the final day of the conference in Columbus, OH, Herbert deplored what he called burdensome federal regulations for oil and gas companies looking to set up shop in Utah’s Uinta Basin, capping two days of meetings and sessions in which state regulators shared the same sentiment about federal interference in their states’ booming energy industries.

“We’re pretty smart people in the states; we understand our backyard better than anybody,” Herbert said. “This is why I’ve asked the commission to pass a resolution urging the U.S. Congress, U.S. Department of the Interior and the U.S. Bureau of Land Management to establish a process for delegating primacy to the states for regulating oil and gas operations on federal public lands so we can be able to take that responsibility on our own rather than go through layer and layer of red tape that’s becoming redundant.

“We have regulators in the state being overseen by regulators,” Herbert added. “Time is money, and it causes operators to go somewhere else instead of developing [assets] here.”

Undue wildlife protections, a prolonged leasing and permitting process and burdensome requirements that don’t exist elsewhere are just a few of the things Herbert said exploration and production companies have to deal with on federal lands in his state (see Daily GPI, Jan 13; June 19).

He added that the problem is particularly acute in Utah, where he said about 70% of the state’s land mass is controlled by the federal government, creating “significant hoops to jump through” and challenges like taking more than a year to get a drilling permit.

IOGCC Executive Director Gerry Baker confirmed that Herbert had asked for a resolution urging the federal government to delegate certain states more primacy in regulating oil- and gas-related affairs, but said it has been tabled for further study.

“We’re looking into it and asking how would we go about doing something like this. Because it’s one thing to say you’re going to do it, but it’s another to actually figure out how to do something like that,” he told NGI’s Shale Daily. “Until the resolution is passed, we’re powerless to do anything. This is something that’s been talked about in the past. Of course states are delegated responsibility from the federal government all the time with things like air management and water because people are there and inspections are already going on on the ground.”

Baker said the resolution could be passed in the coming months. If it is, he said, the commission would begin to promote its efforts and try to build more support for state regulatory control on federal lands.

For Utah, Herbert said it’s imperative. Operations in the Uinta Basin, he said, generate $3 billion annually for the state, where production has doubled in the last decade, with more volume records expected to be set in the next two years.

“I’m concerned about the overreach of the federal government,” Herbert said. “As I get around the country and talk about economics and especially what’s happening in Utah with oil and gas, it’s becoming increasingly clear that the biggest problem for the private sector is not taxes, those are passed onto the consumer, it’s the regulations that get in the way of the bottom line and profitability.”

Mississippi’s Republican Gov. Phil Bryant, who also spoke at the conference, agreed, saying the federal government continues to “move the goal post” when it comes to things like environmental regulations. He cited the U.S. Environmental Protection Agency’s (EPA) proposed emission standards, which would require carbon pollutants from the power generation sector to be cut 30% below 2005 levels by 2030 (see Daily GPI, June 2).

During a meeting with the EPA at the conference, Lynn Helms, director of North Dakota’s Department of Mineral Resources, said his state is still waiting on approval of an application it submitted to the agency for primary regulatory authority of Class IV injection well activities, such as underground carbon storage. Helms said that function is becoming increasingly important as operators in his state look to use more carbon for enhanced oil recovery.

Helms said North Dakota applied for primacy in June 2013, but has heard little about the application other than being told that turnover and new employees at the EPA have delayed its approval.

At the same meeting, Bob Hodanbosi, chief of the Ohio EPA’s Division of Air Pollution Control, summed up state regulator’s frustration when he said the federal government is not consistent enough in its approach, creating too many variables at a time when the onshore oil and gas industry is rapidly evolving. He used the Clean Air act as an example and said that meeting emissions standards in some cases is becoming a moving target.

“Under the Clean Air Act, EPA is supposed to review and revise the ambient air quality specs every five years. For many years, EPA had ignored it and now they’re trying to kick it back in. That provides us with many challenges in that before we reach the attainment date for a particular pollutant, we already have a new standard we have to deal with,” he said. “It’s very complex and confusing and it really doesn’t provide the regulatory certainty that industry wants.”