A new release in the U.S. Geological Survey’s (USGS) Professional Paper series provides an in-depth analysis showing that oil and natural gas resources in the Appalachian Basin remain significant and are sufficient to continue contributing meaningfully to the nation’s fossil fuel needs. 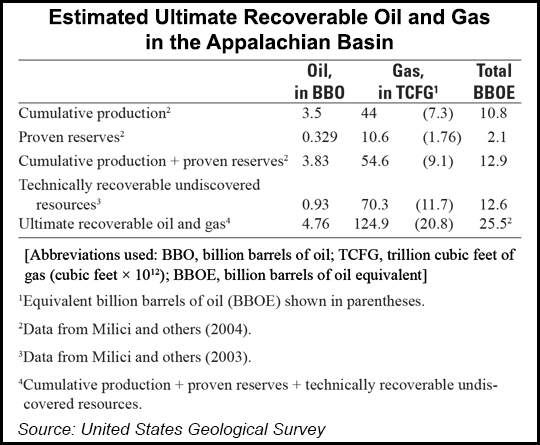 Oil and gas production from the basin, which includes 11 states from New York to Alabama, has been a major contributor to the nation’s energy supplies for the last three centuries. Between 1860 and 1989, the basin produced more than 2.5 billion bbl of oil and more than 30 Tcf of natural gas from more than 500,000 wells, according to USGS. But while conventional oil and gas continues to be produced, most new wells in the region are drilled in shale reservoirs, most notably in the Marcellus and Utica shales in Ohio, West Virginia and Pennsylvania.

The latest USGS paper is a large modernized collection of previous oil and gas assessments in the region. They were rewritten for clarity and aimed at preserving the agency’s “legacy of information” and providing a complete body of work that includes reports that were not previously released to the public without a fee, said USGS geologist Leslie Ruppert.

While no new oil and gas assessments were included, some chapters have been updated to reflect and acknowledge new information. The paper highlights myriad source rocks, traps and seals, reservoir rocks and the generation and migration of hydrocarbons to show how replete the region is with fossil fuels.

It also gives a geologic overview of rock groups that include the Clinton Sandstone, Upper Devonian formations, the Utica and Marcellus shales, the Trenton-Black River Limestones and several other oil and gas fields. The paper also provides evidence reaffirming a new petroleum system in the Rome trough of Kentucky and West Virginia, a deep subbasin that includes the Rogersville Shale, which is thought to be one of the next horizons for unconventional development, as operators have been working to secure acreage and permits in the area (see Shale Daily, Feb. 12).

The USGS said the ultimate recoverable oil and natural gas in the Appalachian basin is about 25.5 billion boe, or 4.76 billion bbl of oil and 124.9 Tcf of natural gas. That estimate, however, and others included in the paper are based on cumulative production data and proven reserves recorded in 2004 and do not include recent oil and gas production from black shale beds such as the Marcellus and Utica.

Even without those sources, and the technology that has enabled operators to recover oil and gas from them, known volumes in the region are 12.9 billion boe, which places the basin in the world’s top 50 oil and gas provinces.