The United States will remain the world’s largest producer and consumer of frack sand for years, and the North American frack sand market is projected to grow by nearly 9% every year through 2016, according to a report by the U.S. Geological Survey (USGS). 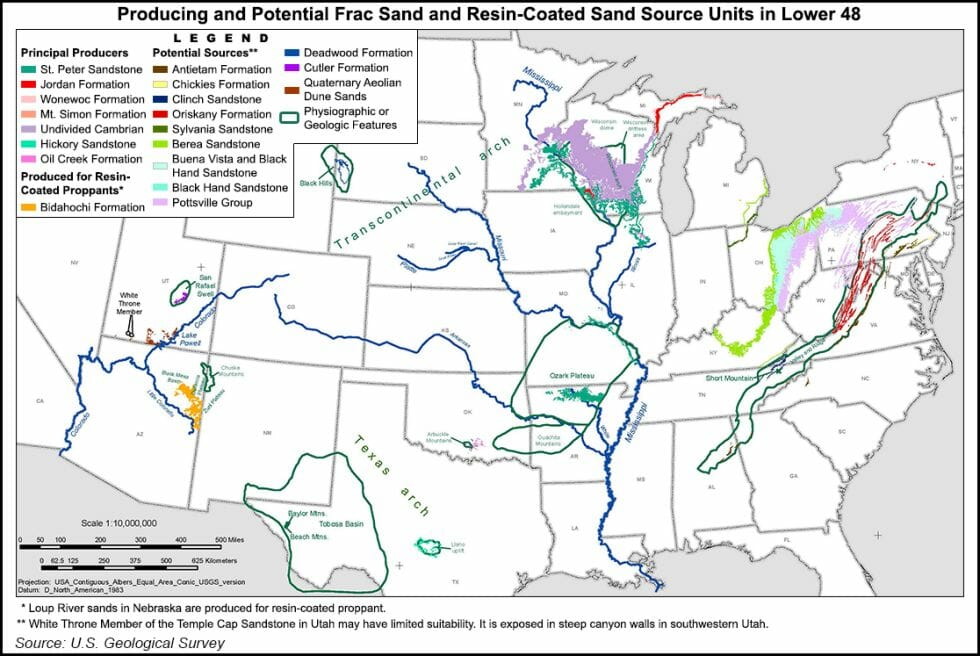 The report cited research by the Freedonia Group, a market research firm based in Cleveland. According to Freedonia, the North American frack sand market is projected to increase up to 8.9% each year through 2016, to 34.4 million metric tons (mmt), an amount valued at $2.2 billion. The firm projects that the demand for proppants will continue to rise into 2017, increasing more than 11% per year and reaching 28.5 million tons, with a market value of $6.1 billion.

Freedonia also said that the United States will continue to be the world’s largest consumer of frack sand in 2016, using 75% of the market supply. Canada will be in second place, consuming 8% of the market supply volume. The firm added that while Russia and China are developing frack sand markets with their own forays into hydraulic fracturing (fracking), they are relying more on ceramic proppants and are cutting back on their participation in the frack sand market.

According to USGS, nearly 70% of the frack sand produced in the United States in 2014 came from the Great Lakes Region, primarily Minnesota and Wisconsin. The report’s authors, Mary Ellen Benson and Anna Burack Wilson, said the frack sand produced in those two states is “highly prized,” is referred to by the mining industry as “Northern White” or “Ottawa” sand, and is 99.8% pure silica sand that is near the surface and economic to mine.

“Sand deposits that are less suitable as frack sand…are also being used in the proppant industry,” Benson and Wilson said. “As the demand for frack sand increases, new sources are being sought that may become economic with changes in technology and physical standards, despite their currently lower quality.”

The principal sources of frack sand in the Midwest Region include the St. Peter Sandstone and the Jordan, Mount Simon and Wonewoc formations. In the South-Central Region, frack sand is mined from the Hickory Sandstone Member of the Riley Formation and the Oil Creek Formation.

Benson and Wilson said “sandstones of the Bidahochi Formation in Arizona and the unconsolidated Quaternary Loup River sands in Nebraska are less optimal for use as frack sand but are suitable for use in the production of resin-coated sand proppants.”

Other potential sources of frack sand in the U.S. include the Antietam, Chickies, Cutler, Deadwood and Oriskany formations; the Berea, Black Hand, Buena Vista, Clinch and Sylvania sandstones, and the Pottsville Group.

The authors contend that the frack sand industry will be challenged with finding new frack sand reserves that meet American Petroleum Institute specifications, have sufficient contiguous volume to be economic to mine, and are close enough to oil and natural gas drilling operations, or are close enough to rail access that could provide transportation to the nation’s shale basins.