Researchers with the U.S. Geological Survey (USGS) found detectable levels of naturally-occurring methane in 80% of drinking water wells it sampled in Pike County, PA, an area prospective to the Marcellus and Utica shales but where unconventional development is currently banned. 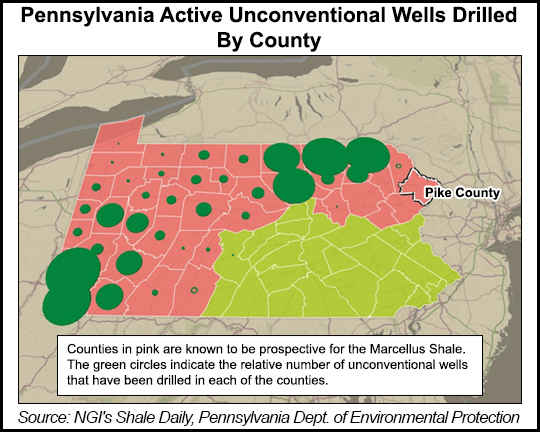 According to a 106-page report released by the USGS last month, researchers began collecting monthly samples from 20 wells in Pike County, located in the northeast part of the state and along the edge of the Delaware River, from July 2012 through June 2013. They found that 16 of the wells had detectable concentrations of methane, but the concentrations were less than 0.1 milligrams per liter (mg/L) in most of the samples; only two samples had concentrations greater that 1 mg/L — testing at about 3.7 and 5.8 mg/L.

“The groundwater with elevated methane concentrations also had a chemical composition that differed in some respects…from groundwater with low methane concentrations,” USGS said, adding that the two wells tested highest for pH value and concentrations of sodium, lithium, boron, fluoride, bromide and inorganic constituents. “Sources of many inorganic trace constituents, such as barium and strontium, in the groundwater likely are natural, whereas sources of chloride may be natural or related to human activities, such as road salting or on-site wastewater disposal, i.e. septic systems.”

The researchers added that the groundwater quality in the region “generally is good,” with few of the samples exceeding drinking water standards. One of the two aforementioned wells that tested highest for methane also had an elevated arsenic concentration, testing at 30 micrograms per liter. USGS said none of the other samples collected during the summer of 2012 had concentrations of constituents that exceeded primary drinking water standards (MCLs), but radon-222 ranged up to 4,500 picocuries per liter (pCi/L). Those samples are 85% and 10% above proposed MCLs of 300 and 4,000 pCi/L, respectively.

“The isotopic composition of methane in the two high-methane samples…indicates a predominantly microbial source for the methane formed by a carbon dioxide reduction process,” USGS said. “This type of methane is commonly called drift gas because of its occurrence in glacial sediments. The stable isotopic composition of water…in samples from all 20 wells plots on the local meteoric line, indicating water in the wells was of relatively recent meteoric origin [modern precipitation], including samples with elevated methane concentrations. The age of the water and the age of the methane in the water may differ.

“Although the origin of the elevated methane in two well-water samples was identified as microbial, the source of the methane in the aquifer is unknown; however, isotopic composition of the methane suggests possible generation from organic material within glacial deposits that overlie bedrock aquifers in Pike County with some possible small contribution of thermogenic methane from greater depths.”

USGS said additional analyses were conducted on samples collected from six wells in June 2013, including four that were sampled monthly since the beginning of the study and two that were sampled once before the summer of 2012. The additional tests were done to determine baseline water quality, boron and strontium isotopes, radium-226 concentrations and age-dating of the water.

“The isotopic composition of strontium and boron determined for the six Pike County shallow groundwater samples differed from that reported for brines from the Marcellus formation,” USGS said, later adding that age-dating had determined the water to be from the 1940s to the early 2000s. “The relatively older age of groundwater with elevated methane suggests that methane may accumulate along flow paths or that these wells tap parts of the aquifer with relatively restricted circulation.

“Areas in Pike County where deep groundwater may be discharging, such as along the Delaware River, may have relatively higher concentrations of methane and some brine-related constituents than elsewhere in the county.”

Pike County lies within the watershed of the Delaware River Basin, which is regulated by the Delaware River Basin Commission (DRBC). The commission has banned oil and gas development in the basin, much to the consternation of Pennsylvania Gov. Tom Corbett and local landowner groups — including those in neighboring Wayne County — interested in selling their property for oil and gas leasing (see Shale Daily, July 21; Jan. 6, 2012).