The U.S. Forest Service (USFS) has finalized a supplemental environmental review of the Mountain Valley Pipeline (MVP), a key step in resolving a permitting setback that has prevented construction on a small portion of the project routed through the Jefferson National Forest. 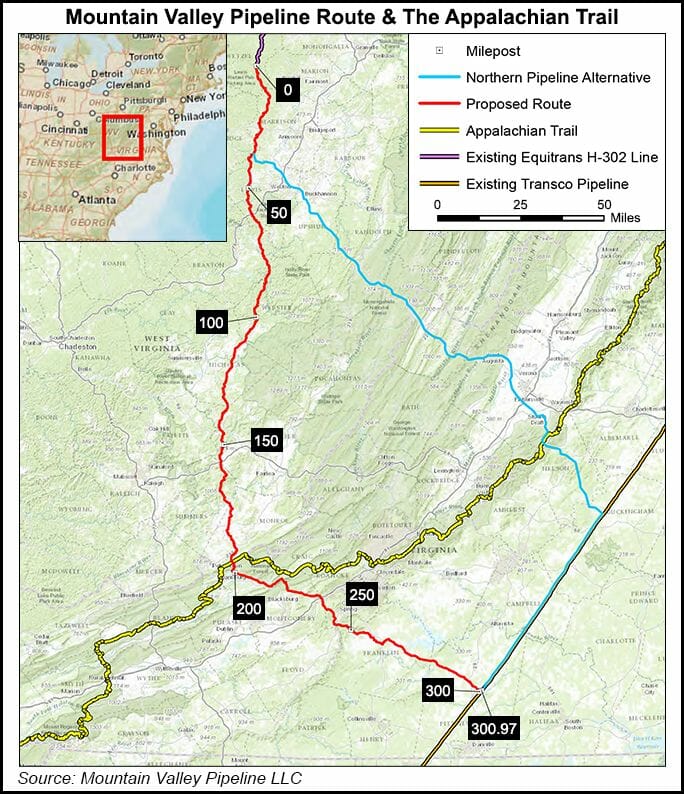 Late last week, the USFS released a final supplemental environmental impact statement for the 303-mile, 42-inch diameter natural gas conduit. The move clears the way for the Bureau of Land Management (BLM) to issue a right-of-way (ROW) for the pipeline’s proposed 3.5-mile crossing through the Jefferson National Forest near the Virginia/West Virginia border.

The document was prepared in response to a 2018 ruling by the U.S. Court of Appeals for the Fourth Circuit, which vacated and remanded an earlier USFS decision permitting the project to cross protected forest lands.

The latest environmental review “addresses the issues identified by the court and any relevant new information and changed circumstances,” according to USFS. The USFS review includes proposed amendments to the agency’s management plan to allow for the pipeline’s construction.

“A Forest Service amendment is needed because the project would not be consistent with several Forest Plan standards,” the agency said. “Relatedly, there is a need to determine what terms and conditions should be provided to the BLM for incorporation into the ROW grant in order to protect resources and the public interest consistent” with the Mineral Leasing Act.

Federal law requires a 30-day interval between finalizing the environmental impact statement and an agency record of decision, according to analysts at ClearView Energy Partners LLC.

“We would therefore look for BLM to reissue these authorizations in mid-January 2021, most probably ahead of President-elect Joe Biden’s inauguration,” ClearView said in a note to clients Friday. “We think it is possible, but not necessarily probable, that the incoming Biden Administration could act to suspend these permits if they are issued in the waning hours of the outgoing Trump Administration.”

Still, while “progressive members of the Democratic Party” might pressure the new administration to suspend the permits, “we think that since the pipeline is largely complete, overt executive action may not be in the offing.”

MVP continues to face legal challenges to its federal permitting, including a recent stay of updated stream-crossing permitting handed down by the Fourth Circuit. The court, however, sided with the pipeline in declining to issue a stay of the updated Endangered Species Act review for the project.

MVP is designed to transport 2 million Dth/d of Marcellus and Utica shale gas from West Virginia to an interconnect with the Transcontinental Gas Pipe Line in southwestern Virginia.

Meanwhile, FERC on Friday issued an order effectively denying a rehearing request filed by a coalition of environmental groups seeking to overturn a two-year extension of MVP’s construction deadline, as well as the underlying certificate order.

Danly and Chatterjee found that the groups “make no attempt to identify errors” in previous analysis released by the Federal Energy Regulatory Commission addressing various permitting issues related to the embattled project, which has faced numerous setbacks since receiving a certificate order from FERC in 2017. Additionally, the groups “make no attempt to demonstrate how the Commission’s prior orders failed to address…concerns expressed in their earlier filings.”

“The majority has chosen to allow MVP to resume construction activities even though we do not yet know whether the project will be rerouted or even permitted to resume based on the ongoing regulatory reviews,” Glick wrote.